I confess I am not a great fan of Florida. My family moved there, from the Bay Area, when I was 15 and, to this day, the charms of the Sunshine State escape me. Your book, Undone, is set in the Floridian town Mirabelle. Mirabelle is my idea of Florida at its worst. It’s hot, sticky, buggy, small-minded, dull, and hostile to new ideas and new people. It’s a mean Mayberry without the cute kid. 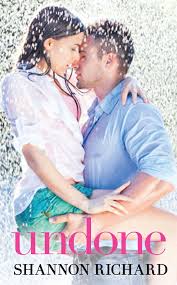 As a romance reader, I’m on the fence about small town sagas. They aren’t my favorite setting, especially in contemporaries, but I don’t shun them either. Done well, the small town setting can give a novel’s characters an understandable framework and, in the best of small town narratives, can be both realistic and endearing. In Undone, Mirabelle isn’t the least bit endearing and, as a context, it makes your leads harder to like.

Paige Morrison’s life has fallen apart in the very big city of Philadelphia. In short order, she loses her job, her boyfriend, and her apartment. Bereft of any other options, she does what Gen-Xers everywhere do and moves back in with Mom and Dad. Sadly, for Paige and for the reader, the Morrisons have relocated to the small stifling town of Mirabelle.

Page arrives in Mirabelle and, at first, her streak of bad luck holds. You see, Paige is a modern woman. (Yes. I know. Modern women are often better prepared for disaster, but that’s one more quibble and I’ve enough for one review.) And, modern women, with their big earrings, high-heeled red shoes and smart mouths, aren’t welcome in Mirabelle. Mirabelle, population 5000, is, the sort of place where any woman having more than two piercings–and they, must of course, be in the ear lobes–is labeled “an outsider.” And by “outsider,” the townsfolk mean freak.

Spongeworthy mechanic Brendan King gets the call. He’s stoked to finally meet Paige–somehow, in a town of 5000, despite being in the same age group, they’ve never met–whom he’s seen jogging around town in “in a wide variety of the brightest and shortest shorts he’d ever seen in his life.”  Brendan arrives and despite his hotness, he pisses Paige off.

He stopped behind the back of her Jeep for a moment, studying the half a dozen stickers that covered her bumper and part of her back window.

She had one that said MAKE ART NOT WAR in big blue letters, another said LOVE with a peace sign in theO. There was also a sea turtle, an owl with reading glasses, the Cat in the Hat, and her favorite that said I LOVE BIG BOOKS AND I CANNOT LIE.

He shook his head and laughed, walking to the front of the Jeep.

“What’s so funny?” she asked, catching up to his long stride and standing next to him….

“Just that you’re clearly not from around here.” He smiled, closing his hand over hers.

….“I am so sick of everyone saying that,” she said, ripping her hand out of his. “Is it such a bad thing to not be from around here?”

“No,” he said, his mouth quirking. “It’s just very obvious that you’re not.”

“Would I fit in more if I had a bumper sticker that said MY OTHER CAR IS A TRACTOR OR ONE THAT SAID IF YOU’RE NOT CONSERVATIVE YOU JUST AREN’T WORTH IT, or what about WHO NEEDS LITERACY WHEN YOU CAN SHOOT THINGS? What if I had a gun rack mounted on the back window or if I used buck piss as perfume to attract a husband? Would those things make me fit in?” she finished, folding her arms across her chest.

“No, I’d say you could start with not being so judgmental though,” he said with a sarcastic smirk.

“Ma’am, you just called everyone around here gun-toting, illiterate rednecks who like to participate in bestiality. Insulting people really isn’t a way to fit in,” he said, shaking his head. “I would also refrain from spreading your liberal views to the masses, as politics are a bit of a hot-button topic around here. And if you want to attract a husband, you should stick with wearing doe urine, because that attracts only males. The buck urine attracts both males and females.” He stopped and looked her up and down with a slow smile. “But maybe you’re into that sort of thing.”

“Yeah, well, everyone in this town thinks that I’m an amoral, promiscuous pothead. And you,” she said, shoving her finger into his chest, “aren’t any better. People make snap judgments about me before I even open my mouth. And just so you know, I’m not even a liberal,” she screamed as she jabbed her finger into his chest a couple of times. She took a deep breath and stepped back, composing herself. “So maybe I would be nice if people would be just a little bit nice to me.”

“I’m quite capable of being nice to people who deserve it. Can I look at your car now, or would you like to yell at me some more?”

“Be my guest,” she said, glaring at him as she moved out of his way.

I didn’t like Brendan or Paige after reading the above scene. However, it seemed unfair to quit without even making it to the second chapter, so I read on.

Brendan is, of course, nice to Paige. He’s so nice to her that he finds her a job, repairs her car, introduces her to friends, shows her the joys to be found in Mirabelle, and makes her love life again. And they live happily ever after.

OK, I skimmed. I do remember Paige and Brendan spend a lot of time necking but not going “all the way” because Paige is the kind of girl who waits. Brendan is also besmirched in Mirabelle because his mom–she died of breast cancer years ago–had two children out-of-wedlock. The funeral home where Paige goes to work has horrible carpeting Paige rips up. Paige, Brendan, and their friends spend lots of time eating at an adorable cafe Brendan’s grandmother runs which is on the beach and also offers take out whenever Brendan needs it. Paige and Brendan have a big misunderstanding that almost but not quite causes Paige to leave Mirabelle. Brendan’s sister has the hots for his best friend (next book!). At one point, Brendan gets drunk.

Undone is a debut novel. I hope in Ms. Richard’s next book, her writing becomes less awkward and better edited. This version, which was an ARC, was riddled with errors and filled with unnecessary exposition.

Between the nastiness of Mirabelle’s mainstream population, the wandering plot, the snarky heroine, and the iffy writing, I struggled to find anything to like in this novel. I suppose that if you feel the small towns portrayed in contemporary romance are too tolerant and could use more guns and fewer neighborly senior citizens, you might like Mirabelle and its inhabitants. I did not. I give the book a D.