I feel like I’ve been neglecting the fantasy genre. This is a terrible thing in my opinion because I love the genre. So I thought to rectify the decided lack of non-YA fantasy in recent reading. I thought your latest novel, the first in a new series, would be a good way to jump back in. It wasn’t a doorstopper and from what I recall of your previous books, your writing is light enough to suit my preoccupied brain during the holidays. 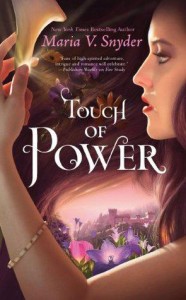 Avry is a healer. Once she considered this a badge of pride. But ever since a deadly plague hit the populace and healers blamed as being the cause, it’s become something she must hide or face execution.

Unfortunately, Avry suffers that particular flaw that afflicts many heroines in fantasy novels: she cares too much for her own good. Here, this manifests as the inability to turn away from a sick child, even though using her abilities means revealing her true nature to people who 1) are hostile to healers in general and 2) receive a sizeable reward for turning in healers. Avry’s been able to elude capture until now but her luck has finally run out.

Or so she thinks. Avry is rescued from certain death but it comes with a price. In exchange for being set free, she must agree to heal a prince who’s contracted the plague and is currently in magical stasis to keep the symptoms at bay. The problem? While healers can cure the plague, they don’t survive the process and die. (In this world, healing works by the healer taking on the damage/illness of the afflicted person and letting their super-immune system do its thing. The problem with the plague is that their immune system doesn’t work fast enough to counter the effects.)

I honestly believed a light fantasy would be right up my alley. Maybe I was wrong. Maybe light fantasies aren’t for me and I’m doomed to keep reading perpetual downers like George R.R. Martin. But this book just didn’t work for me on any level.

First of all, I knew right away that a romantic subplot would develop between Avry and Kerrick, the man who frees her in order to heal his best friend, the prince. I could see that a mile away, but my beef has nothing to do with the predictability. No, my issue has to do with the fact that he treats her like shit for most of the book and since I knew they would eventually fall in love, I spent most of the novel actively repulsed by this endgame.

I understand their relationship is initially meant to be a coercive one. Avry is given an ultimatum and when she didn’t immediately agree, Kerrick spends chapters trying to convince her to change her mind. Desperate people can do horrible things. I understand this. But I cannot root for a romance in which the hero does things like expose the heroine to the elements so that hypothermia will make her capitulate, starve her, tie her to a tree like an animal, and most spectacularly hit her in the face. I don’t care what the circumstances are. I don’t care that the supporting cast chastises him for the abuse. You’ve lost me. Especially when the hero justifies his actions with, “I’m sorry. I was mad.” I can’t get behind this romance at all.

There’s also the minor detail of Avry making an assumption about Kerrick that I’m not certain would or should have been made. In fact, I felt that the only reason this assumption existed was to give the plot artificial tension. Why would she not tell him? Even if she made the erroneous assumption, I feel like she should have tossed this little fact in his face at least once. It was unbelievable that it never came up in conversation at all. This also only compounded my disgust with the romance because if Avry honestly thought Kerrick knew this specific detail, why in the world would she fall in love with him? I’d be pretty pissed that this guy was asking me to die for someone I owed nothing to and who did bad things to my family. It’s not romantic at all and makes me seriously question Avry’s taste in men.

And as so often happens, because I was growing increasingly annoyed by the storyline, I began to notice other flaws. For example, the worldbuilding was shoddy at best. Now I can certainly enjoy fantasy novels in which the worldbuilding is left deliberately vague. But I didn’t get the impression that was the case here. Now I realize that one of the reasons some authors choose to set their novels in the generic faux-medieval European milieu is because that’s the basis for many a fantasy novel. Fantasy readers well-versed in the genre are familiar with it and thus the writer can just spend less time on creating the world and move onto the story. But there’s relying on pre-existing knowledge and then there’s just being plain lazy.

We have healers. We have several other types of mages. Some of which are elemental (bonus points for including traditional Asian elements though) and some of which are not. Other than healers, I had no idea about the power structure or hierarchy of the mages? Do they form gangs? Do they have guilds? Are mages only born to nobility?

Then we have the Death Lilies and Peace Lilies. It took me a couple chapters before I realized the lilies were actually giant man-eating plants and not human peacekeepers with funny names. I hate infodumps but I really don’t think I should have reached such a ridiculous conclusion. On the other hand, maybe I’ve been reading fantasy too long and just assumed that there was no way a Death Lily could actually refer to a lily that causes death. It’s far too obvious. My bad.

On top of this, there were some attempts at political intrigue but due to my distaste with the romance, I actually spent several chapters rooting for the bad guy despite knowing he was the bad guy. Not a good sign in a fantasy novel. Thankfully, we resorted to the age-old cliche of “The villain experiments on children and that’s how you know he’s evil” so I was able to regain my bearings.

Overall, this obviously wasn’t a good choice for jumping back into the fantasy genre. Disappointment doesn’t even begin to cover it. The romance was distasteful and the shoddy worldbuilding was just more icing on the fail. D