REVIEW: Torn From You by Nashoda Rose 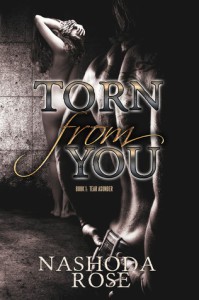 This book was recommended to me by someone in my twitter stream. It’s a weird disjointed story. The prologue introduces the main protagonists as Emily and Logan. Emily is a young woman with body issues from her evil mother but she’s captured the attention of Logan, an illegal fighter and a budding musician. The book reads like a potpourri of trendy cliches – fighter, musician, dark angst, bad boy, mob, etc. etc.

And then names are ridonkulous. Sculpt. Ream. Kite. Deck. Crisis. CRISIS, you guys.  Then there’s “Slexing” which is supposedly sleep after sex. If that is a play on words like sexting it misses the point. Sexting is texting sexy words. Slexing should be sex while sleeping. But hey, with names like Crisis, should I really expect the made up words to make sense. No.

In the PROLOGUE, Logan begs Emily to come on tour with him even though she wants to attend college and then he takes her virginity. The next 100 pages or so is Emily kidnapped by a sex trafficking group that includes Logan. She’s tortured, beaten, digitally penetrated but still thinks Logan is the hottest thing this side of the sun so she can’t help but fall into bed with him repeatedly. I can tell by the obvious hints in the book (Logan’s clenched jaw and fists flying into the wall) that he does not want to humiliate Emily and treat her like an animal, he only does so because he is forced.

The second half of the book takes place two years later as Logan returns and pursues Emily relentlessly. And then everyone gives her shit for not taking Logan back because he walked back into hell for her. I think this conversation pretty much sets the stage for it.

“Jesus,” he growled. “Not once did I take you without your consent. And you know it.”

“That’s because if I didn’t, the consequences were worse.” Okay, I was lying, because I was mad and hurt and yes, I was a little scared too. I had no clue why Sculpt was here, and the thought of going back … no, I’d never go back.

His voice was quiet, “I never beat you, Emily. I tried to protect you.”

“Is that how you live with yourself? No, you just took away my choices. You watched while other people beat me. You bled my self-esteem. Damn it, you tore my fucking heart out.”

“You bled my self-esteem” is indicative of the writing along with ““Go repair from this place, Emily.”  I get what the intentions are of the sentence but I have to mentally rewrite them just as I had to fill in a lot of the character development and justification.

The real problem with this book is that I’m supposed to go places with the author but there is no real preparation. Emily’s narrative slips in and out of being a captive. One minute she’s just totally lost in desire for him and the next she’s thinking “I needed to make certain I wasn’t sold.” It’s like sex scenes were written independent of the narrative. Within any given scene, the reader jumps forward and backward in time without any warning.

The last 60% of the story is Logan pursuing Emily and bascially telling her she had no right to be mad at him because he was really just doing the very best that he could in a bad situation. So she got knocked around a little and was water boarded. He didn’t let anyone rape her other than that one time she was forced to suck someone’s fingers or the time that another person digitally penetrated her. And every time he took her she wanted it. And he didn’t want to do these things to her so she should just suck it up and forgive him.

As Tori from SmexyBook said, the first part is written for shock value and the second part is an emo fest. It’s as if the author tried to fit a longer trilogy into one book in order to avoid the dreaded cliffhanger. But I spent most of the book confused about the motivations and the poorly thought out plot didn’t help.

There’s no authenticity in the book, not in the sex trafficking ring, not in Emily’s escape, not in the “rock star” bit. And I just kind of laughed to myself when Logan is transformed into this signing, guitar playing rock God from his illegal fighting, sex trafficking self.  (We don’t know how involved he was in the sex trafficking only that he doesn’t like it and whatever he did was to save Emily). Weirdly in the last 80% there are a few scenes from Logan’s point of view even though the rest of the story is told in first person from Emily’s POV. That felt like very lazy storytelling. The suspense plot kicks in much later and much like the preceding pages, it’s kind far fetched. I guess on the plus side there’s a lot of story in one book even if  a lot of it is eye rolling.

According to Goodreads, this book is full of the feels. I’m just dead inside. D