REVIEW: Too Hot to Hold by Stephanie Tyler 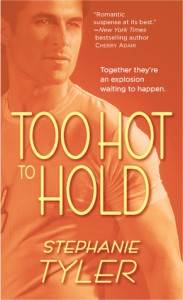 I was quite excited to read this book after finishing the first in the series. Perhaps I expected too much, but I was seriously deflated upon finishing Hard to Hold to the point that I doubt I will read the finale to this trilogy. What were excusable irritants in the first book overwhelmed this story from the confusing sentence structure to the inclusion of too many characters and lack of attention paid to the main protagonists.

As the description says, “Nick Devane’s life is one big, classified secret.” It’s a secret of his own making. Nick is the lost heir of a Kennedy-esque family whom he decided to abandon when he was a teen. He was taken in by another family and the three boys form the basis of this trilogy.

The heroine, Kylee Smith, is a journalist but she’s really only a journalist when it fits the story because most of the time we see Kylee stealing cars, undoing her pants or running around Africa at the direction of Nick. Kaylee was supposed to be a world class journalist but she read more like a National Enquirer writer as many of her stories were about a missing heir of a well known family (aka Nick). But Smith being a journalist provides insta-conflict for a man whose life is built on secrets.

Kaylee finds Nick because he is on a list of men who her now dead ex husband had helped and now she wants Nick’s help.   Someone is calling her asking her to come to Africa with money. It sounds like her supposed dead husband.   Nick’s a SEAL and orders come down for him to keep watch over her.   The story treats Nick’s SEAL team as if they are a private security group that isn’t answerable to anyone.   But what’s realism in a story like this, right?

A major problem I had with the story involving Nick and Kylee was that Nick had issues with physical contact with others due, in part, to his not having been held as a child (I believe). Supposedly being touched triggers the fight or flight response although which response was triggered is never articulated, just that he has the response which he needs to “bite back”. Further, this fight or flight response does not inhibit his ability to have sex with several women at five hours or more at a time, just his ability to sleep with them (because being unconscious next to someone will trigger fight/flight?)    or have non sexual contact with them. And, of course, his flight/fight stimuli is suppressed when he is near Kaylee.

The story takes us back to Africa but for what reason, I’m not entirely sure. At least the excuse given didn’t seem very plausible or reasonable, but it allows for a romance that was started in the first book to take center stage and come to a somewhat satisfactory conclusion. If that weren’t enough, we get yet another setup for yet another romance (that makes three if you are keeping count) with Nick’s adopted brother and a rogue FBI agent.

I also felt like this story was written with the assumption that the reader could make leaps as the characters’ internal dialogue jumped from place to place. At one point in the book, the two are making out in a Porsche:

"I’m not ready to go inside yet-‘I like being here, inside this car with you. Inside means serious business, more talking and what-ifs. But here, against the leather, sitting close to you, nothing’s a problem." Her fingers stroked the soft upholstery on the seat on either side of her thighs-‘her hair was loose around her shoulders and her cheeks slightly flushed. She looked vulnerable and hot at the same time and when she tugged at his arm he knew what she wanted. What he wanted.

Yeah, the headers in this car tended to do that easily enough thanks to the vibrations they created.

I get that the vibrations of the car are turning the two of them on, but that’s not what those two sentences exactly convey. The headers in the car do what? Know what the two of them want? Make her hot and vulnerable at the same time? Another passage that had me scratching my head:

"Car," Sarah called. It was moving down the rutted road slowly, and Nick lowered Kaylee to the ground as Sarah ran into the middle of the road by herself as if she was all alone-‘a woman in distress.

"She’s not going to kill the passenger, is she?" Kaylee whispered to him. He didn’t answer, because the answer would surely be: yes, if necessary.

"Nick, please, tell me she’s not going to do that."

There was no gunshot, only Clutch urging him and Kaylee to walk farther along the road, under the cover of the brush as Sarah walked away. "I’m not telling you anything, Kaylee. Don’t ask, don’t tell. It’s better that way. We need to get you to safety."

She folded her arms tightly to her chest as she began to walk again, in front of Nick this time and out to the road from where Sarah called to them.

There was no sign of the driver and Sarah didn’t say anything but "Get in" as they approached the old car.

Why was Kaylee not worried about the driver initially? Why does she worry that Sarah is going to hurt the passenger? Where’s the continuity? There were about 8 places in the book that had baffling passages not including the number of references to fight/flight that I did not fully comprehend.

So little time is spent developing Nick and Kaylee as characters or developing their relationship together. Instead the story is full of extraneous and uninteresting romances and an action plot that borders on the ridiculous. D

→ Jane
Previous article: Wednesday Midday Links: Google Gives the Finger to China
Next Post: REVIEW: The Bride and the Buccaneer by Darlene Marshall