I was a big fan of your books in the 1990s. They came along at a time when I had not read anything like them. If the characters made mistakes or committed wrongs, your books actually examined the of the characters’ motives for doing so in some depth. And your characters actually had spiritual lives, often in conflict with a troubled conscience. Concepts like honor mattered to them. Your side characters could be Jewish, Roma, or gay, yet never the villains in the story. And sometimes even your main characters belonged to minority groups. 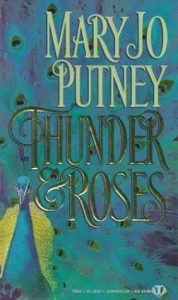 Understand, I came to historical romance in the 1980s via the American single title blockbuster books, at a time when they were quite different from today’s romances. The heroes of many of those 1980s books just took what they wanted, and didn’t spend much time agonizing about wrong and right. The heroines embodied feisty. While those books were filled with adventures in exciting locales, and had some qualities I still miss, your books, when I discovered them, were so different from the pack that they were a breath of fresh air.

The Fallen Angels series, while perhaps not the very first series about a group of men who went to Eton together and earned a nickname for their closeness there, was certainly one of the first, and without a doubt the first I read. I remember the books being prominently displayed in bookstores at a time when most historical were still standalone, so I’d venture to guess that for good or ill, the Fallen Angels’ success played a part in setting the series trend.

I was an avid reader of your books at the time and eagerly awaited each release (This changed for me somewhere around the time you switched to writing contemporaries). I remember reading Thunder and Roses, the first Fallen Angels book, when it was released, and while it wasn’t among my most favorite of your books, I think I would have graded it a B or B+ at that time.

When I heard that the series was being reissued in electronic editions, I dug out my old paperback (yes, I still have it – I hate to separate related books from one another) and decided it might be fun to revisit this book in a review. I wanted to see how the book held up. Unhappily, the answer (for me at least) is not well.

Thunder and Roses begins with a prologue in which a Romani woman delivers her son to his grandfather, the Earl of Aberdare. Marta’s motives for handing her son over to the earl aren’t revealed until late in the book, but Nikki, Marta’s son, is devastated and anguished by his mother’s abandonment, and it is clear the earl is perturbed by his grandson’s dark skin. Marta was legally married to Kenrick, the earl’s son, so the earl is forced to accept a “gypsy” as his heir.

Flash forward twenty-three years, and Nicholas Davies is now the Earl of Aberdare. Rumors have it that “the Demon Earl” seduced his grandfather’s much younger wife, bringing about the previous earl’s death, and then capped off the crimes by murdering his own wife. But Clare Morgan still goes to confront Nicholas about failing in his responsibilities to the villagers on his Welsh estate.

Clare is a schoolteacher as well as the daughter of the deceased Methodist Reverend Morgan, and is therefore respected in the local village of Penreith. Nicholas has just returned from four years abroad. He is drunk and wants nothing more than to be rid of Clare when she shows up at his home and insists that the dearth of jobs and the dangerous conditions at the coal mine in Penreith are forcing the villagers to risk their lives and that since Nicholas owns both a slate quarry and the land on which the mine is located, he must do something about it.

To get rid of Clare, Nicholas proposes a trade –he’ll help the villagers only if she’ll sacrifice her reputation to the cause.

To be clear, Nicholas is not asking Clare for sex. He merely wants her to move in with him so that everyone will think they are having sex. If Clare, Reverend Morgan’s daughter, is willing to destroy her precious reputation to save the same villagers who will condemn her, she will enlist his help. Otherwise, it’s a no go.

Oh, and there’s also the matter of a little side bet about whether Nicholas can actually succeed in seducing Clare during the time she’s in residence at his home. To that end, Clare must allow him a kiss a day. He will not go beyond that without her consent.

This being a romance novel, Clare agrees rather than telling Nicholas to go to hell. Nicholas, who mostly wanted her to go away, is instead obliged to check out the quarry and visit the mine. Clare takes on the redecorating of his house and discovers that a portrait of his late wife infuriates Nicholas.

Eventually the two travel to London where Clare gets a new wardrobe and Nicholas introduces her to his other “Fallen Angel” friends, Lucien and Rafe. A fourth friend, Michael, owns the mine on Nicholas’s Land, but Lucien warns Nicholas that while he was traveling, Michael conceived a hatred for him for unknown reasons.

While Clare and Nicholas await an opportunity to approach Michael about the mine, their daily kisses grow more passionate. But though Nicholas thinks that being “ruined” could only be a good thing for Clare, Clare vehemently disagrees. Since she’s never felt a deep spiritual connection to God, she feels she’s a fraud both as a Methodist and as the reverend’s daughter. Nicholas’s kisses amplify that feeling and therefore Clare both looks forward to them and dreads them.

I had a number of problems with Thunder and Roses this time around, but I’ll start with the nature of Clare’s conflict. I have no problem, at least in principle, with a heroine whose religious beliefs prevent her from sleeping with the hero. That was the case with the heroine of your medieval romance, Uncommon Vows, and it worked for me in that novel. But in that book, Meriel was deeply devout and had almost become a nun as a teen. She was also held captive by the hero who wanted her to agree to become his mistress. So she had very strong reasons to refuse.

With Clare, the religion vs. premarital sex conflict did not work nearly as well for me, and here’s why: Clare’s fears focused on her reputation and what others thought of her and it was in this context that she seemed to find sex sinful. But she couched her objections in terms of religion and spirituality.

As events in the book later proved, her experience of spirituality was in no way harmed by sex; the real issue was what others thought of her. I think I would have had more sympathy for Clare if she had called a spade a spade and just admitted that it was her reputation and her standing in the community that mattered to her most, not the state of her soul.

Moving on to Nicholas. I think I was supposed to find Nicholas a charming rogue, but I found him pretty off-putting. First, there was his hypocrisy. He goes on about how he doesn’t force women, but he insists on the daily kiss a number of times when Clare is reluctant. He also touches her in casual ways early on in their relationship when he knows she’s not entirely comfortable with it.

Third, there’s the fact that even after Nicholas realizes conditions at the Penreith mine are horrendously dangerous, he threatens to withdraw his support from that cause when Clare tries to leave him. That’s right – he doesn’t force women, but a bunch of villagers will have to die unless Clare stays at his side and puts up with his kisses.

Okay, yeah, Clare is turned on by these kisses, and obviously so is Nicholas. Maybe he’s even falling for her. But threatening to endanger the lives of the miners, which include children, in order to have her is not cool.

But here’s my most important point: I think I might have been fine with all of the above had Nicholas been portrayed as a morally ambiguous character. If he’d owned up to his dark side, the way the hero of Uncommon Vows does. Sadly, that doesn’t happen here. A couple of people chide Nicholas for what he’s doing to Clare but Nicholas himself doesn’t seem to realize what a jerk he’s being.

Moreover, Nicholas is continuously referred to as charming. He has peacocks and penguins and a sad life story about all the people who betrayed him, and all that is somehow supposed to make him a nice guy even when he’s being selfish, childish, and obnoxious.

The book does have some good points – interesting details about mining conditions, a sexy game of strip billiards, and a nice suspense sequence involving fire. I appreciated that Nicholas was frequently described as dark skinned (even now the historical romance genre is too white), and liked side characters like Clare’s friends Owen and Marged. And when the conflict between Nicholas and Clare came to a head, it finally got compelling.

Other aspects I felt less keen on. The pacing of the story felt slow, though that may be partly because I’d read the book before and knew where the story was going. The language was occasionally pleasing but occasionally anachronistic. The gypsy side characters were portrayed stereotypically, but at least that they were also portrayed as a safe harbor for Nicholas. I mildly liked the resolution of Michael and Nicholas’s relationship, but hated what came between them in the first place.

(Nicholas’ dead wife, Caroline read like a stock villainess and in that regard, the book reminded me of those 1980s books in which so the heroes despised all women because of one bad experience with love. Thankfully, Nicholas wasn’t a misogynist, but I still found the absence of all redeeming qualities in Caroline deeply problematic.)

On the whole, a good part of Thunder and Roses frustrated me, and I was a little surprised that I managed to finish it. I feel like I am slaughtering a sacred cow here, since I know how beloved the books in this series were for many readers, myself included. It feels churlish to write this after the many, many hours of reading pleasure I have received through your books in my years of reading, but as a reviewer, I have to be honest, and the truth is that while my 1993 self enjoyed this book, my 2012 self found it dissatisfying. D