REVIEW: The Secret Child & The Cowboy CEO by Janice Maynard

In the pantheon of overused tropes, the secret baby one is probably my least favorite. I wonder if my sensitivity to this has grown since I’ve been a parent myself or whether repeated exposure to this theme has just plain tired me out. But it isn’t just the secret baby trope that set off my bells in this book, it was the heroine who had no self respect and the asshole hero. It was a triumvirate of fail for me. 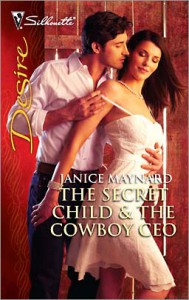 Here’s the plot: Bryn Matthews grew up with Mac Sinclair and his four sons. She fell in love with Trent but after being rejected by him at 18 she turned to the youngest son, Jesse. Bryn got pregnant and Jesse claimed the baby wasn’t his. The entire Sinclair clan turned their collective backs away from her and she was thrown out of the family. Six years later, Bryn returns to the Sinclair ranch after the death of Jesse at the request of Mac who needs nursing services. Bryn also returns to claim her son’s share of the Sinclair inheritance. Trent is   at the ranch, taking a break from making his billions; and he is going to make damn sure that Bryn doesn’t take advantage of Mac while Mac is ill. And Trent is going to try to restrain himself from Bryn’s obvious sexuality.

So the plot isn’t that horrible. It’s the execution of the plot that is horrible. Bryn keeps throwing herself at Trent again and again who keeps telling her how much she disgusts him.

He gazed at her bleakly. "The damned thing is, Bryn, it worked. I wanted you so much, I was sick with it. And if you had left Jesse alone, you and I might have ended up together. But you made that impossible. And then you tried to make Jesse take responsibility for another guy's kid. You disgust me."

But Trent’s disgust for Bryn doesn’t stop him from saying that they can put things behind them so the two of them can have sex. (Trent already believes she is a slut anyway, right?) Bryn is so weak that she can’t say no to him even after he tells her that she disgusts him. Disgusts him. That’s really strong.

Bryn doesn’t really inspire any warm feelings herself. She leaves her five year old son to go to take care of Mac and hopefully change his feelings toward her and her son so that her son can get a share of the Sinclair millions. On the one hand, that’s great and on the other, she has so little thought of her son other than a nightly phone call that I found her care for her child to be fairly superficial. Her thoughts of her son come to mind only when it is convenient to move the story along. Further, she finds out that her son might not be part of the Sinclair family and decides to keep that information to herself.

She spends an inordinate amount of time internally reviewing all of the sins of Jesse (and they were multitudinous but enough already).

I struggled to find anything likeable about any of the characters. There is Mac, the patriarch who is 99% sure that his son was likely lying about Bryn despite having almost raised Bryn himself, particularly when he knew how troubled Jesse was. No one thought to get a DNA test and Bryn didn’t demand one. Trent was led around by his penis. Only one chapter separates the “you disgust me” from “I’m trying to put the past behind me so we can sex each other up.”

Fortunately, Bryn’s innocence is cemented in Trent’s mind when they finally do have sex because her passage is so tight. Surely she couldn’t have been the slut that his brother made her out to be. Oh, the old tight passage. The revirginization.

Bryn was almost a virgin-if there was such a thing. Her body hadn't accepted his willingly. She'd been fully aroused, no doubt about that. But he'd had a difficult time penetrating her incredibly tight passage.

Which must mean she had gone without sex for a very long time. And that picture sure as hell didn't jive with Jesse's description of Bryn as a seducer and a promiscuous teen.

Through rediscovering her re-virginity, thankfully, Trent decides that Bryn is a Madonna ill used by the family. It’s kind of amazing that Trent was a successful businessman since he was able to bring 2 and 2 together to get 25. Let’s see, Bryn still could have been a slut as a teen and not have had sex for five years because she was too busy being a single parent. Her frigging tight passage (if you even believe that old yarn) could have been created post slut time period. But even so, she’s had a melon pass through her old tight passage. Sigh. Whatever.

The writing style and prose was decent enough but the asshole to doormat ratio is high and for me, unbearable. D.