REVIEW: The Registry by Shannon Stoker

I can’t decide if all these dystopian YAs featuring young women as chattel are a reflection of current social anxiety about the state of womens’ rights or simply lazy writing. Not to say that oppressed young women finding freedom isn’t a story worth telling. It obviously is. I just think that a lot of what I assume to be intended feminist novels end up supporting established sexist narratives in the process, thereby negating the liberating narrative they’re meant to tell. 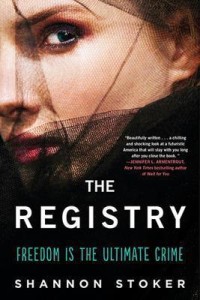 In the stark future of The Registry, the United States has instituted a system segregating the sexes. Boys are raised to be soldiers, trained to protect their country at the cost of their lives. Girls are raised to be brides, auctioned off to the highest bidder — typically one of the former soldiers who survived their service to their country. As a result, girls are the desired progeny for the money they bring in. The boys? Often tossed out on the street.

The novel’s heroine, Mia, grew up wanting nothing more than to be a bride. It was her greatest wish. Then one day her older sister comes home broken and abused, and Mia’s illusions about the system she grew up buying into are shattered.

The Registry strongly reminds me of a younger, updated The Handmaid’s Tale. I think that’s to its detriment because how can you compare to what has since become a modern classic? It’s a lot of expectation.

I appreciated what the novel was trying to do, making a protagonist out of a sheltered, naive girl who was raised to be nothing more than a pretty showpiece on a man’s arm. But as I’ve said in the past, I prefer my characters smart. Not necessarily book smart; I appreciate a well-developed sense of street smarts and people smarts in my fictional characters.

Mia has none of these things. She is not the sharpest knife in the drawer and I wish I could say that was just because she was intentionally kept ignorant. In the world of The Registry, a girl’s worth is determined by her price tag so buyers fight over the expensive girls. The cheaper girls often never get bought and instead go into government service — they “marry” the government. As readers can probably surmise, the smart girls are given low price tags to make them look unattractive to buyers while the not-so-bright girls are given high price tags. Given that Mia is the protagonist, not only is she the most beautiful girl ever — apparently only tall, skinny, blue-eyed blondes are the epitome of hotness — she also has the dubious honor of having an extremely high bride price, which unfortunately correlates to her intelligence. Or lack thereof, as the case may be.

Now it would be one thing if she started off from a place of ignorance and worked towards a position of knowledge. But after the life-changing revelation that marriages can be abusive and the Registry’s system of marriage is little more than slavery, Mia doesn’t do much with that information. It drives her to run away, true, but does she prepare for it?

You have to understand. I come from a fantasy reading background. There’s this common storyline where a pretty young thing is forced to marry a horrible man. Now this “horrible” quality varies: he’s old, he’s violent, he’s abusive. Whatever the trait, the girl refuses to marry this man and runs away. And in almost all those cases, she doesn’t prepare adequately and bad things befall her. The thing that always bothered me in these storylines was that the girl never prepared. In the best case scenarios, she brought a change of clothes and maybe some bread but more often than not, she overlooks some basics — like a map.

Mia suffers from that same lack of foresight. Coupled with a lack of effort to learn more, I was quite dubious about this heroine. Now I guess you could say she did have people smarts. She intended to use her best friend — a smart girl who’s been on the marriage market for so long that her fate to become a government bride was all but guaranteed — to help her survive out on the road and a farmhand to guide them both to Mexico and freedom.

But see, that’s the thing. She intended to use them without giving anything back. That’s just crappy. There’s a point where Mia is called out for this behavior but because it comes from the slightly unstable farmhand, it loses its impact. The narrative needed to do a better job of criticizing this.

And that’s another thing. In a stunning turn of events, the farmhand, Andrew, becomes Mia’s love interest. I know readers are shocked. But unfortunately, he belongs to that all-too-common breed of YA love interest: unstable and violent. I know his character was meant to portray how the country’s system breaks its boys and turns them into unfeeling killing machines, but Andrew was a sociopath and one prone to terrifying flights of rage. Even I wouldn’t wish this fate on the dim, selfish Mia.

In some ways, I think most of my complaints could have been mitigated by better writing. The romantic subplot, such that it is, is executed in a clumsy, immature fashion. It’s a case of instalove for Mia, and I can only assume that’s because Andrew is the first young man she’s ever spent any amount of time with. When a second love interest was introduced later in the novel, along with the resulting love triangle, I almost groaned out loud. I dislike love triangles under the best of conditions. But these characters in their late teens were acting like kids who were much younger, and that made it so much worse.

The villain, Mia’s buyer and husband, is the classic mustache-twirling bad guy. How do you know he’s evil? He randomly shoots government agents. He randomly throws people out of helicopters. Why? Because they were annoying him and that’s what evil people do when they’re annoyed. If I were to be generous, I could say this was yet another example of how the country’s system destroys its boys. It makes them grow up orphans and if they survive their duty, they grow up to be homicidal maniacs. But given the novel’s other flaws, I’m not feeling too generous.

I think this is a sign that I need to take a break from dystopians. At the very least, I need a break from books featuring depressing futures in which girls are reduced to little more than property. Even if this trend is meant to be a reflection of present-day social anxiety, that doesn’t mean I need to read about it in my fiction. D