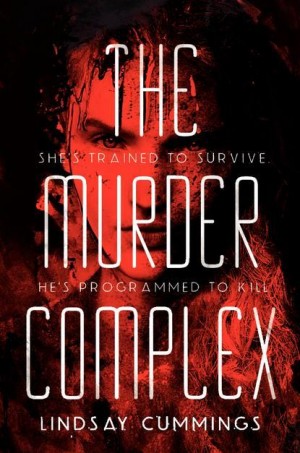 I think we’ve reached that stage where post-apocalyptic and dystopian novels are being labelled something else to circumvent disenchantment. I obviously have thoughts about this because given the flood of such books over the past few years, readers can spot them no matter what you call them. The Murder Complex is being touted as a futuristic thriller but don’t believe it. This is a dystopian, albeit more action-packed than we’ve grown to expect from the subgenre.

Now I like action. I think many dystopian novels could have been vastly improved had there been more of a balance between external action and internal monologuing. But balance is exactly what The Murder Complex is missing. Except in this case we swing wildly in the other direction to all action and little meaningful character development.

First, we have our two viewpoint characters: Meadow and Zephyr. (I don’t even know where to begin with these names.) Meadow lives on a houseboat somewhere in futuristic Florida with her father, older brother, and little sister. Zephyr is an orphan who, from what I’ve been able to gather, is charged with picking up garbage around the city. But wait, here’s the twist! Meadow was trained by her fisherman father to be sociopathic killer. As for Zephyr? Well, he’s a sleeper assassin whose mission is to kill randomly picked citizens as some convoluted form of population control. If you’re beginning to raise your brows, just wait. I haven’t even gotten to the worldbuilding yet.

In fact, I don’t even know how to explain the worldbuilding. While I’m not a fan of the Infodump School of Worldbuilding, giving bits and pieces of the setting via the narrative only works if they make sense and form a cohesive whole. From what I was able to put together, there was a plague at some point. Then a teenaged genius (Meadow’s mother, naturally!) finds a cure involving nanotech and the world is saved! Except the nanotech means that disease and injury are no longer things that happen and the population gets out of control. Resources have to be carefully controlled and rationed by the government, here called the Initiative. This led to the formation of the Murder Complex (translation: the sleeper assassins) to control population growth. On top of that, I’m fairly sure there was some sort of war that razed the earth because everyone lives in the city and doesn’t venture out. Also, there are pirates and crazed, garbage-covered mobs that roam around attacking people. (Why? Just because!)

There are other elements I’m omitting here because they venture into spoiler territory but while I’ve done my best to make sense of the worldbuilding, trust me when I say the execution is random and disjointed at best.

There are elements that sound like they should make for an interesting story. Meadow’s genius mother, Lark, is missing and presumed dead but she casts a long shadow over our heroine’s life. Responsible for the cure that saved humanity, and later doomed it, Lark was a key member of the Initiative and the mastermind of the Murder Complex. What happened to her? Did she betray the Initiative? Was she killed because the government found her? There’s great potential for the mystery of Lark but what actually happens in the book is both underwhelming and ridiculous.

Similarly, Zephyr falls instalove with Meadow. Why? Because he’s been dreaming of her for a long time. Meadow is his silver-haired dream girl, you see. (I’m choosing to believe “silver” is just a frou-frou way of saying “sun-bleached” or “platinum blonde” so please let me retain that delusion if I’m wrong.) That’s… okay, I guess, but this gets a weird connotation because Lark is the one who raised Zephyr and trained and programmed him into being a sleeper assassin in the first place. Seriously, Lark’s voice is the one he hears in his head when he gets his orders to kill. And Meadow got her “silver” hair from Lark. It’s weird, right? Does Zephyr dream of Meadow because there’s some unexplained connection to her via the programming done by Lark? Or does he dream of a younger version of Lark? I feel uncomfortable about this either way.

Ultimately, The Murder Complex fails for me because of a simple reason: the characters. Lots of things happen. So many things happen over the course of the book, in fact. But I couldn’t bring myself to care about any of it because I didn’t care at all about any of the characters. Not Meadow. Not Zephyr. When I don’t care about the protagonists, it doesn’t matter if they’re wanted by the government or being chased down by pirates. And it certainly won’t hit me hard when I learn the (not all that surprising) truth about Meadow’s mother.

The Murder Complex gets compared to La Femme Nikita and Hanna, and I can see why. It’s full of cinematic-style action and violence. But I love Hanna because I loved the characters as well as the action and violence. And there is no getting around the fact that a book is not a movie. You can do things with the written word that you cannot do with a movie and vice versa. Namely, especially in the YA genre, the ability to get into the characters’ heads and get a strong sense of their personality and feelings. I think The Murder Complex might have forgotten that along the way. D

→ Jia
Previous article: REVIEW: All Through the Night by Connie Brockway
Next Post: To Infinity and Beyond (or at least to India)