Despite the recent flail over the “death of the historical,” I’m ever-hopeful that unique and compelling Regencies are still being published. Unfortunately, The Autumn Bride falls short of my vague-yet-demanding criteria by quite a distance, landing squarely in the “wallpaper” and “cookie-cutter” pits of romance despair. 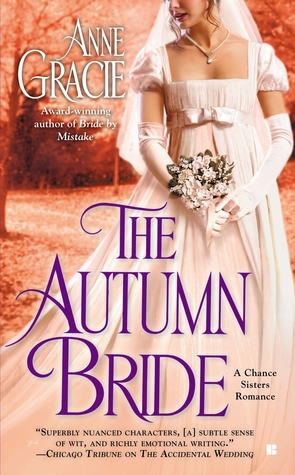 Governess Abigail Chantry will do anything to save her sister and two dearest friends from destitution, even if it means breaking into an empty mansion in the hope of finding something to sell. Instead of treasures, though, she finds the owner, Lady Beatrice Davenham, bedridden and neglected. Appalled, Abby rousts Lady Beatrice’s predatory servants and—with Lady Beatrice’s eager cooperation—the four young ladies become her “nieces,” neatly eliminating the threat of disaster for all concerned!

A romantic entanglement was never the plan for these stubborn, passionate opponents—but falling in love may be as inevitable as the falling of autumn leaves…

I think I was subliminally swayed into buying this because of the four — count ‘em, four (4)! — em-dashes in the description. Alas, the fun didn’t last beyond the punctuation.

The annoyances and eye-rolling started in the prologue, in which we learn the newly-titled hero has been financially ruined by his profligate late uncle. We know Max is ruined because the word “ruined” is used approximately 17 times within the first five pages. And poor Max really has lost everything, because none of the barony’s numerous properties were entailed. There’s some mumbling about a broken trust, but that’s the only explanation we get, and it’s enough for the young lord to abandon his beloved widowed aunt and scurry off to make his fortune overseas.

Fast-forward ten years, and we’re introduced to the orphaned governess heroine, Abby, as she’s drawn into rescuing her younger sister from the clutches of an Unseen Evil Villain. Of course, the abductee escapes the iniquitous brothel with her maidenhood intact. The siblings also manage to liberate two other young women, and they all swear allegiance to The Sisterhood.

So, with the heady air of freedom firing their blood like a sweet and potent wine, they vowed to be as sisters to one another, to become a family.

When their plans for husband-hunting are thwarted by poverty and illness, Abby decides to burglarize the neighboring mansion. She must (of course) wear borrowed breeches and crawl over broken glass for this adventure. Instead of piles of silver waiting to be pilfered, she finds the bedridden, nearly suicidal Lady Beatrice. Saint Abby is compelled to return a few days later, at which time the neglected noblewoman offers her home to The Sisterhood.

While this premise could have worked, the character and backstory inconsistencies were too much to overcome. We’re told that Lady Beatrice became ill and was taken advantage of by her Evil Greedy Servants — all of whom had been newly hired (of course). A few of Lady B’s friends attempted social calls, but were turned away by the Slimy Evil Butler. She’s been a virtual prisoner in her own home for months, being fed only gruel and water, never bathed, never even moved from the bed. The tragedy! The pathos!

But then….we’re asked to believe that Lady Beatrice was a leader of the ton, a “magnificent, outrageous” hostess renowned throughout the upper echelons of society. No one of her noble acquaintance had the fortitude to deal with a surly butler? No one raised questions or even gossiped about a baroness disappearing? And when The Sisterhood moves into her home, Lady Beatrice magically transforms from frail and forgotten back into fierce and feisty — all she needs is fortifying soup and some henna to restore her once-glorious red hair. I just could not reconcile the Lady B who throws a hissy fit about wearing castoff clothing and says things like “I never trust the word of people with their hands on my privates” with the pathetic elderly recluse wallowing in her own filth.

When Max the Ruined Viking Pirate (scruffy beard, longer-than-fashionable hair tied back with a leather thong) returns with fortunes restored to find four mysterious young women living in his beloved widowed aunt’s home, it’s the perfect — and predictable — setup for a Big Misunderstanding. He insists Abby is a con artist, she refuses to explain herself, etc., etc.

And, of course, our happy couple’s bickering is interspersed with extensive mental lusting.

It was all going well until Miss Chance reached for the syllabub, one of his favorites, a dish of sweet, tangy whipped cream. It matched the frothy top she was wearing.

She dipped a spoon into the creamy confection and transferred it to her mouth.

Her eyes half closed in bliss as her lips closed over the spoon and she let the sweet mixture slide over her tongue and down her throat.

Max forced himself to resume his story. There was nothing at all unusual about the way she was eating; it was all perfectly comme il faut. So why could he not take his eyes off her?

She spooned up another mouthful. This time when the spoon was slowly withdrawn a tiny, gleaming morsel of syllabub remained quivering in the corner of her upper lip. Unhurriedly she licked it off.

Max’s words dried up along with his throat.

After a moment Miss Chance stopped spooning up the syllabub. Her brows rose. She was looking at him. The entire table was looking at him, waiting for him to continue his story. Hanged if he knew what it was. He cleared his throat.

“Very. And you, Lord Davenham?” She took a third leisurely spoonful. His groin tightened.

That passage was the high point of dramatic and sexual tension in the book. From there, the story plods through Max’s realization that he really is an asshole, Abby’s cardboard sassy saintliness, unnecessary scenes with sequel-bait secondary characters, and off-page suspense(less) shenanigans with the Unseen Evil Villain, culminating in a tacked-on and boring deflowering in the last chapter. Not to mention the endless internal monologues rehashing events we just read about.

Further evidence in support of the wallpaper/cookie-cutter classifications include:

My “first impressions” grade was a C-; The Autumn Bride isn’t a painful read (hence my half-hearted snark), but there’s nothing in this story worth recommending. When the main characters’ names slid out of my brain just hours after reading, I had to downgrade, because superficial, forgettable books like this aren’t doing the maligned historical romance genre any favors.  Grade: D+