Your novel was discussed in the comment thread to Kim T.’s post about South Asian romances. I discovered the ebook version after a bit of digging, since my first hit was on the paperback version, which you published under the name “Nina Roy.” While the blurb made me a little skeptical (“revolt is seething in the loins of the colonial settlement” sounds painful rather than appealing), I downloaded the sample and was intrigued. The Kindle sample offers the first two chapters, in which there are three quite enjoyable sex scenes. But as the story progressed, I grew more and more annoyed. The novel belongs to a well-trodden genre. It’s a mixture of Heat and Dust, A Passage to India, and (as was suggested to me on Twitter), The Lover. In other words, Western woman journeys to the Exotic East and finds herself through sexual pleasure with a dusky, alluring Native Man. To add insult to injury, it’s not that erotic. 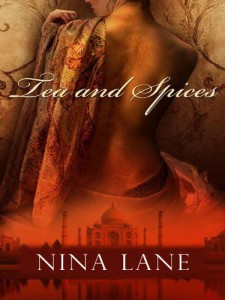 Devora Hawthorne travels to India to join her husband, Gerald, who is British civil servant in a small cantonment town in the United Provinces. She and her husband are in love and have satisfying sex, but Devora feels as if she’s missing something in life, something India can provide her. Gerald has to travel out of town regularly, and when she is on her own Devora finds amusement first with the Maharaja of a nearby princely state, and then with their servant, Rohan. Gerald, meanwhile, has spent their six months apart amusing himself with his servant, Kalindi, who herself is in a relationship with Lota, another servant. Devora realizes this and is both resentful and intrigued (I really wanted this storyline to go somewhere, but no). Slowly, Devora and Gerald drift apart, partly because of his frequent absences, partly because Devora grows increasingly disenchanted with her British neighbors in the cantonment, and mostly because Devora becomes passionately attracted to Rohan, Gerald’s inscrutable majordomo.

The characterizations started out well. Devora was your garden-variety curious Englishwoman, but she was well written. Gerald was a bit on the obtuse side, but he loved Devora and didn’t seem like too much of a colonial bigot. The other English characters were uniformly and stereotypically bigoted about India and ignorant in general, but they were window dressing so I was willing to live with that. But as the story progressed, Gerald and even Devora became less and less likeable, and the Indian characters fulfilled any number of standard colonial-fiction stereotypes.

For example, the Maharaja starts out as an intriguing Indian aristocrat with a penchant for erotic art and a harem full of beautiful young women. That could be interesting, and when Devora is invited to lunch and seduced by him, it does. But then the Maharaja takes her to Khajuraho, famed for its erotically explicit temple architecture, and it’s the Marabar Caves all over again, except with consensual sex that goes wrong. The Maharaja morphs from a charismatic character to a skeevy lecher, and that’s more or less the end of him until the last part of the book. Devora then moves on to Rohan, with whom she has been bickering and arguing up to this point. She realizes he’s attracted to her and taunts him with subtle and unsubtle sexual cues until he gives in to his passions. The story then transforms, awkwardly, into a romance between them. Except Gerald is still around, so he has to be shown to be a pig by resuming sex with Kalindi. In due course, Devora and Rohan are found out, Devora leaves first Gerald, then the town, and finally India and returns to England, complete with an unbelievable, fifteen-years-later, Happy Ending of a conclusion.

The depictions of the Indian characters (and the English, for that matter) read like something written in the 1920s or 1930s rather than a decade ago, and maybe that’s the point. But it’s difficult for me to read a book about Indians during the independence movement and have them relegated to the extreme roles of Maharajas or servants with no purpose other than to bring sexual enlightenment and satisfaction to the white people who rule them. And yes, I know it’s an erotic romance and disbelief should be suspended. But is it really necessary to use such stock characters? Kalindi is depicted as enjoying sex with Gerald, but she has no control over when and whether it happens. Rohan is seduced by Devora, presumably so that he doesn’t fit the predatory native sex machine stereotype, but again, how was he supposed to say no? He’s written so that he falls in love with her, but that’s the author talking, not something that emerges organically from the character. And the Maharaja is Devora’s sexy tutor until he steps over a line, at which point he is revealed to be a villain who abducts village girls for his icky pleasures.

The setting is strange. If you are reading this book because of the Indian context, you will come away less well informed than when you started. The story takes place in a cantonment town (these were settlements where the British lived), which is (a) near the Ganges; (b) a few hours from Agra; and (c) two hours from Khajuraho. Maybe that intersection exists on a map, but I couldn’t find it. The year is 1925. I know this because it says so at the beginning of the book. But there is no sense that this was an era in which Indians participated in contention and rebellion with a specific political agenda (there is a roaming gang that attacks British people and a mention of Gandhi, but that’s the extent of it). The author does not seem to understand the distinction between “civil lines” and “civil service.” I finally lost it at the point where Devora falls down in Agra and when Rohan helps her up, British men think he’s a coolie trying to take advantage of her. Devora says,

“I’m sorry,” she said. “I hate men like that.”
“I’m used to them. I will wait here while you make some purchases.”
Worried that the unpleasant men would come back, Devora quickly bought some fruit and mutton pies before she and Rohan returned to the car.
“I guess it’s not possible to really escape, is it?” she asked.
Rohan shrugged and pulled onto the road. “It depends entirely on your definition of escape.”
“Have you had many encounters like that?”
“Some.”
“Rohan, don’t you ever just want to leave here?” Devora asked. “I mean, move to another country or something? It must get unbearable at times.”

This is a time when Indians were sacrificing themselves for the good of their country, incurring physical, financial, and other kinds of injury and hardship to gain freedom. And this chick wants to know why an educated but low-paid servant doesn’t just leave for somewhere else because it’s so bad there with the British in charge. Hello! Allow me to introduce you to a newspaper, any newspaper, which will be full of articles on this strange organization called the Indian National Congress. It is working for what you seem to want, White Lady. Perhaps you should consider learning something about it? Or there is the Muslim League? But wait, there are no Muslims in this story. Oh, I’m sorry, the United Provinces is only the cradle of the Muslim League. Why would there be any Muslims?
[/rant]

Arousal surged in Devora’s loins as her tension began to ascend. The railing pressed hard against her belly, but she welcomed the abundance of sensations. Rohan’s cock thrust in and out of her like pliable iron, his hands gripping her hips. His belly slammed against her buttocks as the wet, delicious sounds of sex filled the air and seemed to drown out even the noise of the rain.
Devora’s heart pounded so hard she could hear it inside her head as Rohan filled her again and again, his hard testicles slapping against her sex. He slipped one hand underneath her, sliding it over the surface of her belly and through the damp curls of her mons. Devora gave a cry of pleasure when his fingers began rubbing her sensitive nub.
“Oh, yes,” she moaned. “Harder. Oh, please…”
Rohan thrust into her with rapid strokes, his pathway eased by Devora’s slickness. With a groan, he pulled out of her and pressed his shaft between her buttocks, sliding it up and down before spurting onto the round globes.
He leaned over her, reaching around to massage her breasts with one hand as his other hand continued working at her sex. Devora couldn’t breathe for an instant as her body hovered on the precipice of rapture, and then a final stroke from Rohan sent her over the edge into a swirling mass of color.

Rohan shook his head. “There is much unrest in India now,” he said. “I do not know what will happen, but the Indians are determined to free themselves from British control.”
“As well they should,” Devora muttered. “I heard Gerald is still there, only he’s in Calcutta now. Apparently he’s a top official in the freedom negotiations, only of course on the British side.”

Excuse me? Why wouldn’t Gerald be on “the British side?” He’s a civil servant. There’s a war on. It’s his job to administer the country for the British. To do anything else would be treason. Of course, Devora was willing to betray the British government for money earlier in the story, so maybe the author thinks this would be a Good Thing.

But wait, it gets better. The epilogue heading specifies that fifteen years have passed since Devora left for Bombay. That means this conversation takes place in 1940. Britain is fighting World War II and London is enduring the Blitz (this is unremarked in the epilogue, where everything is wonderful). The Indians will eventually be revolting in the Quit India movement, but that won’t start until 1942. Any “freedom negotiations” are at least six years away, and partition and independence occur a full year after that. In Delhi, not Calcutta.

And that, dear readers, is how a book earns the Mistorical tag from me.