I admit, with a certain amount of chagrin, that there was a time when I would gobble up any romance or story with romantic elements that was set in space. I think I once told someone “A hero farts in space? I’m there and A+!” and I meant every word.

But that was a long, long time ago… 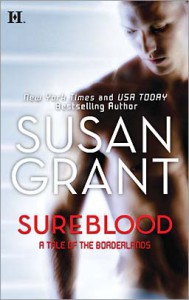 And from then to now, there has been an explosion in space-themed romance (thank you authors, and hallelujah) so I no longer feel the desparate need to read every outer space/other space/other planet romance that hits the shelves. I did read both The Star King and The Star Prince and remember liking them. However, with TSP, I also recall being frustrated by a scene where the H/H had 30 seconds to live and managed to have the boink of a lifetime in an escape pod during that time. Not that I think a quickie is a bad thing…but for some reason, I think that was their first actual boot knockin’ session. Which brings me to Sureblood: the key term here is frustration.

As the daughter of the head of one of the strongest pirate clans in the Channels, Val Blue is determined to prove her worth when she takes a command position during a raid on a mining vessel. But the pirates aren’t only looting for cargo; they’re trying to keep other pirate clans from getting the goods first, which means that the Blues must beat the Surebloods to the punch when they raid the ship. The raid goes wrong and the Blue raiding party is forced to work with the Surebloods to make sure they all get out alive and escape with the booty. Val is drawn to Dake Sureblood, the leader of the Sureblood clan, like a robot to a black hole.

The Surebloods travel to the Blue’s planet to try to make peace and Val and Dake get it on during the festivities, even after numerous obstacles are thrown in their path. However, there is so much mistrust and resentment going on between all of the clans that you know this party isn’t going to have a happy ending. Before the last orgasmic shudder fades, all hell breaks loose and Dake is accused of killing Val’s father and Val is forced to assume a precarious leadership position. Dake leaves the planet to investigate a suspicious accident involving Val’s brother and Dake (this is not a spoiler; it’s on the back cover) is abducted by the Drakken, an imperialistic group of slave drivers conscripting soldiers for their cause.

While all this sounds very exciting, the pacing of the book is unbelievably slow, the villains (along with their motives and their next moves) are totally transparent, the heroine has a massive lack of growth and the hero spends at least 1/3 of the book in miserable captivity. I was ready to toss in the towel. At the point where Dake is abducted, I almost fainted when I realized that I had more than 200 pages left to read.

As a hero, Dake is actually great. He puts his clan before everything else and truly believes he can not just initiate change, but begin a new and prosperous era for the pirate clans by uniting them. He realizes that everyone isn’t just going to capitulate to his charisma, and I think one of the issues I have with him as a “leader” is that he doesn’t seem to realize that the odds of any of this working ar really against him due to the ingrained distrust between the clans, and doesn’t seek to find a way to prove himself or his clan. On the positive side, his feelings for Val never waver (sure, you say, she wasn’t the one that was kidnapped…but we’ll get there in a moment) even after having his life shredded by the Drakken.

Val made me want to throw up. Like Dake, she has blinders on too, but her tunnel vision is so limited to raiding that her mother could have killed her father and she wouldn’t notice that things might be slightly awry. She blindly trusts people, allows questionable clan members into positions of power and never investigates things. When Dake disappears, she automatically assumes that he left her high and dry…but NONE of the Surebloods show up after that, and Val and the Blues take rumor as fact that they’re still fighting for the same turf. For someone who is supposed to be a clan pirate captain, Val’s massive self doubts and total lack of leadership outside of a combat capacity should have crippled her and quickly forced her out of the position. I’m actually shocked that she didn’t turn into the warrior I expected, but rather a wimpy shadow of what she was. Perhaps that was the one surprise in the book. D