Please tell me I’m not the only person who’s fallen victim to this. You hear a premise for a forthcoming book. It sounds so great that the potential awesome overwhelms everything else. You overlook some crucial details like, for example, the background of the author writing it. In other words, your enthusiasm clouds your judgment. You never stop to think how this could go so terribly wrong. 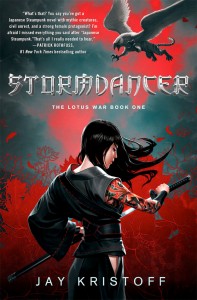 You’d think after all this time, I’d know better.

When I first heard the premise for Stormdancer, I was excited. Yay, fantasy that’s not based on Western cultures. Yay, steampunk that’s not set in Europe. At first glance, this seemed like a winning combination. I never stopped to think of the ways in which this could fail and looking back, I really should have.

Stormdancer tells the story of Yukiko who, along with her father, is charged by the shogun to find and capture a griffin, which had been previously thought to be extinct until now. The shogun saw one in a dream, you see, so this means one must exist! (If you find yourself thinking that this shogun character sounds like he might be a raving megalomaniac, you’d be correct.)

So Yukiko and her father round up some allies and head out on this doomed mission. Much to their surprise, however, they do encounter and capture a griffin. Unfortunately, that’s the only thing that goes right for them. Everything else ends in disaster and Yukiko finds herself stranded in the wilderness, her only companions an enraged griffin and someone who could bring her a death sentence. Now Yukiko must find her way back, even as she learns the truth behind the glory of their civilization.

In theory, that premise doesn’t sound terrible. I’ve certainly read worse and I’m sure other readers have too. But there are so many flaws in the execution, I don’t know where to begin.

First of all, the so-called cultural research. Where was it? Look, if an author is going to write a book using elements from a culture not their own, I expect a certain amount research and respect. Anything less is cultural appropriation. And having finished this novel, the only research I can see came from a few anime series, maybe a couple Miyazaki films given the heavy ecological themes in the novel, other Asian-based fantasy novels (Lian Hearn’s Tales of the Otori comes to mind), and Wikipedia. Really?

I can’t even call the random Japanese dialogue fangirl Japanese because it’s used wrong. Even fangirl Japanese uses the -sama honorific correctly. And maybe this was the author trying to alter language to suit the novel’s setting but no, this is not how it’s done. The vocabulary abuse drove me up the wall. It seriously was like fingernails on a chalkboard.

I’ve since been informed that the author insists that while the novel is set in a world that looks like Japan, it’s not actually Japan. Thanks for pointing that out. It’s not like that wasn’t obvious or anything, given that it’s a fantasy featuring a griffin. I can only view that as a cop out and handwaving for authorial laziness. Sure, it may not be Japan but there is a shogun who rules over the land. There are samurai, geisha, and oni. Many articles of clothing and types of weaponry are referred to in Japanese. The in-world cosmology is lifted straight from the Kojiki: the epitaphs for each of the book’s sections reference Izanagi and Izanami. The sun goddess Amaterasu, her brother Susanooh the storm god, and the thunder god Raijin are mentioned in the text consistently. I’m sorry but at this point, you can’t claim this isn’t Japan. It may be a Japan that never was, but the basis is clear.

But I suppose that handwaving is necessary. Otherwise, what other explanation is there for the presence of pandas and the characters’ usage of Aiyah! as an exclamation? Neither of these things are Japanese. They are Chinese, however, which makes things worse in my eyes because fiction, and in particular fantasy, has a long history of conflating various Asian cultures and viewing them as the same. They’re not and in the case of Stormdancer, which uses Japanese culture so heavily, the random peppering of Chinese cultural elements is especially jarring.

And cultural fails aside, the story’s execution is just not good. The first 50 pages are full of clumsy infodumping. It’s like the author got caught up in the shiny idea of Japanese steampunk!! that he forgot about the plot. On the other hand, those pages do showcase an impressive use of Wikipedia. So many weapons and articles of clothing are referred to in the Japanese (not that there are any graceful English equivalents) without much context that I began to doubt whether someone not versed in the source culture would be able to follow. A lot of it is extraneous and seems to serve the purpose of proclaiming that research was done. But these details, in the end, are superficial. They won’t fool people who know better.

The plot finally starts 50 pages in and by 100 pages, the action begins moving. But in a 300-page novel, that’s an awfully long time to get going. I know we joke about epic fantasy doorstoppers in which the first 50-100 pages set the stage but they’re called doorstoppers for a reason. Some of those books are over 1,000 pages long. Stormdancer‘s 300+ is tiny by comparison.

As for Yukiko, she highlights a common problem in fantasy novels that proclaim to feature a “strong female protagonist.” Don’t get me wrong. Her introduction was fine. But maybe because of that, I noticed something else in those first 100 pages. Every female background character was either a geisha or prostitute. There are two exceptions: a dying woman labelled as one of the Impure and her daughter. This immediately put me on alert. Asian women are often sexualized in media portrayals and seeing geisha pop up every five pages did not put me at ease.

Later in the novel, there’s a scene in which Yukiko’s allegiance to the shogun is revealed to people rebelling against him. The sign of this allegiance? A tattoo. And how did they find out? Two guys spied on her while she was taking a bath so we can get an icky scene in which two random dudes ogle her naked body. How nice. It’s great when a “strong female protagonist” is objectified because apparently her strength and agency don’t matter if she doesn’t look good naked. There are a million ways in which this reveal could have been executed and this was the option that was chosen? Did we want to show off the anime influences? Because if you watch enough, particularly in the harem subgenre, you’ll come across a scene like this.

And it’s not just Yukiko. There are other women warriors in this novel. One is an adulteress. Another is lethal in a fight but again, that doesn’t matter if she doesn’t look hot while doing it:

The girl slid down into a split, kimono riding up around her hips

Which brings us the romance subplot, such that it is. Yukiko spends a good majority of the book daydreaming over a certain samurai’s dreamy green eyes. Sure, whatever, I’ll roll with the inane depiction of a hopeless crush. I read lots of fantasy books. There have been worse portrayals. But then it becomes apparent the book is setting up a nerd versus jock dynamic. In this case, it’s a samurai versus engineer-type dynamic: the buff guy with the dreamy green eyes and the frail guy in the insectoid exoskeleton.

The problematic gender portrayals had already made me uncomfortable by this point so when I realized what the romantic dynamic was going to be, I was permanently alienated by the narrative. You see, the engineer guy loves Yukiko. He’ll do anything for her! But does he ever tell her? No. She should be able to read his mind and know his feelings. She should reciprocate his feelings and not be hung up over this other guy. The narrative might as well call her an ungrateful slut and be done with it, because that’s definitely the message it was conveying. And as astute readers can surmise, the plotline resolves in exactly the way you think it will. Guess who betrays her and who stays true to the end?

I’m embarrassed that I fell for this hot mess. I really do wish for more diversity and cultural portrayals in the fantasy and YA genres, but I can do without books like this. The only reason I’m not grading this an F is because the book is readable on the prose level. But it was a very close thing. D