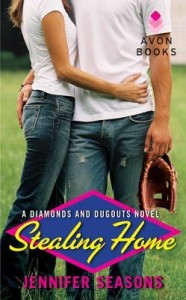 This is one book wherein I think the grade looks harsher than it really is but I had so many problems with this book, I felt like it was the best reflection of my interaction with the story.  Others may have had a much different experience.

The story begins with Lorelei Littleton spying on Mark Cutter at a Denver bar.  Mark is a the star catcher for the Denver Rush baseball team, a team in the hunt for the pennant.  Mark’s ex-wife has  offer to pay Lorelei $100,000  if Lorelei steals Mark’s good luck charm.   despite obvious efforts to make this believable, the setup was still shaky. Lorelei was given the security code to Marx apartment by his ex-wife which made you wonder why the ex-wife simply didn’t waltz into the building and steal it herself.  (There are later implausibilities like how Mark forces Lorelei to stay with him by taking her phone away from her.  Like she can’t get out and use a phone and ask her brother to come and get her if she wanted to?)

Most of this book operates under the premise that because Lorelei is doing a number of bad things because she is desperate to save her niece,  that the bad actions are excusable. The storyline also relies on an imposition of reverse double standards. When  I mean by that is a woman who is treated like Lorelei treats Mark  would be deemed deplorable. However, because it is a woman treating a man poorly, particularly a famous athlete, her actions are to be measured on a different scale.

Unfortunately, I didn’t buy into either of those premises. The book bothered me from nearly the beginning to the end.

Lorelei and Mark hit it off at the bar.   She proceeds to go back to his apartment and drug him and rob him.   When he calls her on the robbery, she is snippy and rude to him.  She proceeds to insult him from the moment he confronts her about the robbery until they finally get together. She constantly harps on him for having lots of women.  As he is confronting her about a) robbing him and then b) trying to extort him out of money to gain the charm back, they have this exchange:

“So it’s all about the Benjamins to you, is it? You were at my house last night half naked and ready to do it. If you’re only in it for the cash gain, then guess what that makes you?”

Anger balled in the pit of her stomach, bitter and scorching. Lorelei took a deep breath and met his gaze, let her anger spark. “You calling me a whore is laughable, Mark Cutter. Don’t think I’m stupid, because I’ve heard all about you and your women. So don’t you dare stand there and throw stones at me. You don’t have the right.”

When Mark calls her out for constantly accusing him of having sex with any number of willing women, she responds that why should she assume anything else when he was willing to go home with her at the bar.  If Mark is a slut for wanting to participate in a one night stand, then isn’t Lorelei the same. Or at least, doesn’t Mark get to make the same accusations?  The Mark is a slut is a theme that gets tossed around by Lorelei in order to provide contrast to Mark’s true issues.

Lorelei also thinks that she’s better than Mark because he’s just a self-absorbed athlete.  Unfortunately we’ve seen Mark do nothing but kind things. He takes time out of his meal to congratulate a boy who’s a fan and give encouraging advice.  Mark doesn’t turn Lorelei in for drugging and blackmail. Mark never acts better than anyone, not with Lorelei and not with her brother.  The only person who is a shithead in this book is Lorelei.  I never felt any sympathy for her even though we were given a reason right away (that Lorelei’s niece will die without a $100,000 surgery).  Lorelei’s justification was never fully played out for me. She’d rather steal from someone than actually try to hold a fundraising, go to her community, ask for help?

As far as the romance, I guess I saw where the two had chemistry as the initial conflict of Lorelei’s niece’s medical condition gave way to a more romantic conflict; but overall, the two didn’t work for me as a couple. I felt more frustrated by the failed  portrayal of Lorelei as the sweet martyr than invested in the HEA of the two.  D