I don’t try and hide the fact that when I read (yet another) romance book title that features the word “scandal” or “shocking” or “Duke” or “Mistress,” the chances of me reading it drop a notch. I’m so damn sick of these interchangeable titles I could scream. For that reason alone, when you offered us your book, “Space Slugs” to review, I decided if the excerpt was halfway decent I’d give it a try. It was and I did but unfortunately, many things about the book left me wanting. 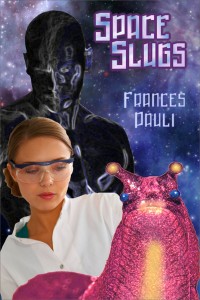 Dr. Murray Livingston is answering yet another distress message from her wayward, space hopping sister Zora who’s gone and gotten engaged again. After a trip to try her patience, Murray arrives to find herself being thrown in a jail cell with Zora to await the wedding. Free spirited Zora is apparently having second thoughts about the groom and counted on Murray to bail her out of another self inflicted mess. Murray throws her hands up in disgust then notices that the ashtray Zora is using is actually a skull – well an android skull. After Murray puts the parts back together, Rook proceeds to break them out and lead them towards freedom. Only Zora insists on snagging at least one present on the way out which turns out to be a pink space slug named Neela.

With the rapidly growing Neela on board with them, the three blast off the planet only to crash land on yet another one which leads them to all kinds of adventures on that planet and two more. Will Zora keep from getting them into more trouble? Will Murray and Rook sort out their feelings? And will Neela find slug love?

I read the beginning of the book as a sort of tongue-in-cheek, humorous adventure. Murray and Zora trade zingers, the slug is cute and I was curious about Rook. But as I kept reading, I started getting annoyed.

The entire book is told from Murray’s point of view and after a while, Murray got on my nerves. I don’t mind a flawed heroine but Murray is judgmental and quick to jump to conclusions until the very end. She can also be a real bitch at times yet totally clueless at others. I got the point that she’s had to put up with Zora’s wild hijinks for years and is tired of them but still I wanted to smack Murray several times. And the romance going on between Murray and Rook…well, without his POV I just didn’t see what they saw in each other besides the fact that you told me they saw something in each other.

Okay so the romance didn’t work well for me which leaves the SF stuff. Which also didn’t work well for me. The book is named after a gastropod who ends up growing to gargantuan size but there’s actually very little slug facetime. And most of her appearances, and those of the male who shows up later, are described in terms of the amount of slug slime present in them. This got old. There’s also very little information about the slugs. I understand that they’re rare, the last of their kind but never found out why. Or why she bonded with Zora. Or how she grows so quickly. Or why Neela wasn’t initially enamored with her new boyfriend. Or why on she later was. Why, why, why?

For that matter, the entire world building here is sketchy at best. I hate info dumps but a little – no, make that a lot – more information would have been very helpful. Instead I got just enough to confuse me and not much else before the plot spun off in yet another new direction. It seemed to jump from event to event and then just as quickly abandon those for something else.

When I finished the story I was left with a ton of questions but no answers. Why was Rook on the first planet and disassembled? Who is the Emperor and what’s the deal with the clones? Why is android love sneered at? What happened to the zoo and the animals? What about all the slug questions mentioned above? Who’s the father of Zora’s baby? And I’m almost totally in the dark about Rook’s planet. Given how many questions I ended up with, the fact that the romance is skimmed over, and the SF is patchy, I really can’t recommend the for any reason. D