REVIEW: Something Strange and Deadly by Susan Dennard

It seems like steampunk books are all the rage these days. I admit I’ve yet to find a steampunk YA that I can really get behind but I keep hoping. And if there’s one thing that steampunk novels can’t seem to do without, it’s zombies. I’m pretty ambivalent when it comes to these reanimated corpses as narrative props in novels. For a while, it seemed like zombies would become the new vampire but that never quite happened. Despite these two things, I remain optimistic that I’ll find the novel that’ll change my mind. Unfortunately, this wasn’t the one. 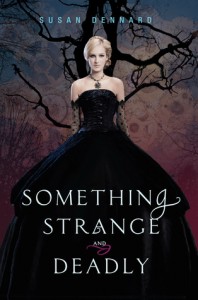 Eleanor Fitt comes from a once-wealthy Philadelphia family that’s since fallen from grace. An accident ruined her father’s business, driving him to paranoid delusions which led to him — and by extension, his family — being ostracized from polite society. After his death, Eleanor’s mother has tried everything in her power to be accepted back into the fold and this often means spending money they no longer have. Their family is now on the verge of financial disaster. Their only hope lies with Jonah, Eleanor’s beloved older brother.

But when Eleanor goes to meet him upon his return from New York City, he’s nowhere to be found. Worse yet, there’s a zombie attack. Eleanor manages to escape unscathed but not before a zombie delivers a telegram directly to her. It’s a message from Jonah. He’s not coming home. That, in itself, is unwelcome news. Due to Jonah’s return being continually delayed, Eleanor’s mother has been pushing her to find a rich bachelor to marry. But why would the telegram be delivered by zombie? That can mean nothing good.

I really wanted to like this book. I loved the title, which I thought was evocative. I thought the cover art was pretty. (Yes, we all know my weakness for pretty cover art. I need to overcome this because it so often leads me astray!) I liked how the coffin bells were incorporated into the worldbuilding. Historically, bells were installed in coffins in case people were accidentally buried alive. It was known to happen back then. But in the world of Something Strange and Deadly, the bells are a zombie early detection system. The bells ring when the corpses start crawling out of the ground. So simple, yet such a clever twist. I can’t help but wonder why I haven’t seen this device used more often in zombie fiction.

But overall, this book did not do it for me. Most of that can be attributed to the characters. I could not connect with any of them and found the majority of them unlikable. Take the heroine, Eleanor, for example. She’s that female protagonist we run across so often in YA novels. She’s being pushed into unwanted marriage by her mother. No matter his reasons, the most eligible bachelor in Philadelphia, Clarence, has been paying her lots of attention. But she couldn’t care less about any of that and finds it to be bothersome. While she’s not as pretty, thin or well-mannered as some of her peers, she’s smart and spunky. It’s like we took every cliche from the YA female protagonist handbook and rolled them all into one. The only thing I liked about Eleanor was her heightened financial awareness but even then that’s not too unique. The romance genre is filled with long-suffering female characters who’ve learned to stretch pennies in order to take care of their families.

This impression is further cemented by the supporting female characters. Eleanor’s mother is conniving and abusive. She constantly pushes Eleanor’s into marriage in order to save the family but doesn’t do anything herself. It’s not as if spending money the family doesn’t have is going to help. Clarence’s sister is portrayed as being very pretty but also shallow and not very smart. Two other peers are depicted as being virtuous — but only until Clarence shows any attention in Eleanor. Then they snub her and act like shrews. These are very two-dimensional portrayals and it irritated me that apparently only women who transgressed social norms (Eleanor, a member of the Spirit Hunters that I’m leaving deliberately unnamed because it takes away from the initial surprise) show any sign of nuance or depth.

The romantic subplot follows the Initial Dislike Masks Instant Attraction trope. I’ve never been too keen on this storyline and this novel didn’t do anything to change my mind. Eleanor seeks out the infamous Spirit Hunters, who’ve been brought to town to combat the zombie menace, to help her track down Jonah. One of its members, Daniel, ends up being her love interest. While I’m glad the novel didn’t take the love triangle route between Eleanor, Daniel, and Clarence, I wished the romance had been portrayed more deftly. I didn’t understand why these two liked each other, to the point that they’d eventually be wiling to risk their lives for one another. I’ve never found it charming when a guy insults my intelligence or competence. The opposite, in fact. I realize this is the equivalent of the little boy putting a frog on the little girl’s head but this is not kindergarten, and you’d think romantic portrayals of older characters would be past that.

The final antagonist came out of left field for me. Yes, there were hints about it throughout the entire book but I felt his inclusion weakened the overall narrative. When the initial antagonist is revealed, it’s meant to be horrifying and heartbreaking for Eleanor. That was meant to be powerful. But then the final antagonist was brought in and everything that happened before was overshadowed.

It’s not just that the introduction was sudden. It’s that by bringing that character onto the page and giving him more dramatic weight, it minimizes the importance of the initial antagonist. It forms a hierarchy where initial antagonist is not as bad as the final antagonist. Except the initial antagonist did some terrible things: he killed multiple people, he unleashed zombies upon multiple cities. Something powerful could have been done with all that, especially once the identity was revealed. Instead it’s cut short because of this other random guy.

Maybe I need to give up on YA steampunk and zombie novels. They don’t seem to work out for me, but I want to believe there’s a book out there I’ll like. Something Strange and Deadly had some interesting ideas but I found the characters largely unbearable so I was unable to enjoy many of them. The plot does move along at a fast clip but perhaps that’s part of why I’m so dissatisfied. The characters seemed to act in ways solely because the plot dictated they do so rather than driving the plot themselves. On the other hand, the ending did show a true understanding of the sacrifices necessary to win and I always appreciate it when a narrative is willing to go there. D