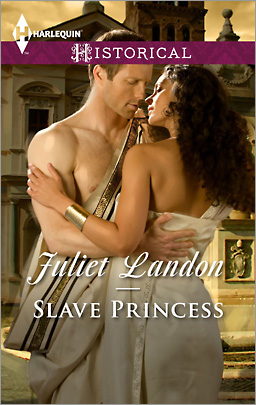 SHACKLED TO A SLAVE!

For ex-cavalry officer Quintus Tiberius Martial duty always comes first. His task to escort the Roman emperor’s latest captive should be easy. But one look at his fiery slave and Quintus wants to put his own desires before everything else…For Princess Brighid, her powerful, battle-honed captor has her head in conflict with her heart. Bound by a new-found bondage of emotions, it’s not long before Brighid wonders whether she wants to come out of this perilous journey to Aquae Sulis with her virtue intact…!

The first book of yours I ever read, “The Warlord’s Mistress,” still remains my favorite one. I’ve always enjoyed books with an ancient Roman/Britain setting so I was excited to see this latest offering listed at Harlequin (though I had to end up buying it from Amazon because it is still pending at Harlequin). Unfortunately it didn’t take long before I began to have my doubts that I would like it as much as “Warlord.”

The initial scenes were great. There was camaraderie between Quintus and his two junior officers tasked to work with him on a tax issue in Bath, sly humor in the scene of Quintus receiving his marching orders from his emperor and I liked the way that the real life quarrels that Emperor Severus had with his eldest son were worked into the story.

What I was not happy with from the start was Brighid’s lack of agency. She swoons from hunger into Quintus’ arms, she gets carted around, she gets paraded in front of bitchy Roman matrons for fun – though she does slay that witch with her intelligence. Quintus keeps her on a short leash and thinking she has to ingratiate herself with him so he won’t sell her as a slave.

I guess I really should have paid more attention to the blurb which states that Quintus always puts duty first and his desires before everything. He uses and manipulates Brighid from the get go and his pet name for her of “Barbarian,” and the way his use of her title is more sarcastic than respectful say a lot about how I perceived he sees her. Even with the two Army CPAs acting like a Greek chorus reminding us that they think Quintus is falling hard despite everything he might say or do, I found it difficult to think of him as anything but a dick.

The story has an Old Skool feel. One kiss from Quintus is all it takes to put the love whammy on Brighid. I get that she’s seen a lot of fornicating – or at least heard it while living in the communal Brigantian buildings – though she’s never even been kissed but she’s got the resistance of used Kleenex if Quintus starts kissing on her and feeling her up. Really it’s like sexing chloroform.

As the relationship between Quintus and Brighid grows, I can tell their feelings are changing towards each other but hers seem focused on how he makes her dissolve with his caresses while he seems more possessive than truly in love with her. He does have a care that she, as a virgin, is ready for sex but makes it – almost too – good for her. Earth moving, fireworks going off, heavenly chorus and all from her first time.

I was delighted to see two gay characters and also the fact that the Romans think nothing of such relationships by which I mean, it’s entirely accepted and normal.

The plot threads seemed to appear and then vanish. Things were mentioned then not a part of the story for another hundred pages. Then at one point, a character disappears. Other characters are initially frantically searching for him, then when they discover what might have happened to him – and the implication is he’s being abused by his captors – there is a collective shrug and decision made that if he hasn’t turned up in a day, they’ll shake the place down for him. WTF?

The finale ties all the disparate plot points together in a way that makes sense though the actions of one character added late to the mix seemed odd to me. He has knowledge of dodgy doings which he knows would be of more than passing interest to authorities and he does nothing to pass on that information. Huh?

The resolution of Quintus and Brighid’s relationship didn’t work for me either. After a books worth of him ordering her around, silencing her – to his point of view – inconvenient demands to discuss her future with swoony kisses and sex to the point where she – who acknowledged to herself that she loved him – was truly thinking that leaving him for another man was her best bet, his sudden declarations that he’s loved her all along, he can’t do without her and they’re getting married rang false and as not enough to change my opinion of him. I loved the setting but I finished the book thinking Brighid deserved so much better. D

→ Jayne
Previous article: REVIEW: A Gentleman in the Street by Alisha Rai
Next Post: What are you reading on?