When you offered us a chance to read this book, you included a lovely excerpt scene that whetted my appetite to try it. It was cute but not cloying, funny, tender and – for lack of a better word – real. I could see this happening and because of that I really wanted to read this book. You sent us the book, and an updated version which is the one I ended up reading, and I uploaded it to my Sony then sat down with anticipation. It didn’t take long before the trouble started. 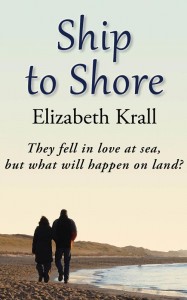 The story is divided into two distinct parts and follows Dermid and Sally as they meet on a tall ship making a transatlantic crossing from Bermuda to London with stops on the way. Then later on, it picks up again with the Sally ending up by chance on the same small Hebrides Island where Dermid, and his many relations, lives. The first part, to be brutally honest, is sheer hell. Firstly, there are a ton of characters introduced in an extremely short amount of story space. I believe the number 50 is the total of people on board the ship and if you didn’t at least introduce all of them, if not give backstories on them, I’d be surprised. My head was spinning. Who was who, how did they all tie in together, which ones should I even bother to try and remember and who could safely be forgotten with no loss to the narrative? More than once I had to refer back to the excerpt to remember that it’s Sally and Dermid who I truly needed to keep track of. Most of the rest were superfluous. I sat, darkly muttering, who the hell *are* all these people and why should I care who is on what watch or bunked together?

Then came the sailing stuff. I can deal with some sailing stuff but I haven’t dealt with this much sailing stuff since I started to read the Aubrey-Maturin novels. There at least it means a great deal and can have major consequences. Here, it’s mind numbing filler. Truly, we don’t need to read how each sail is “handed,” who is standing watches and the ways they use to keep themselves awake on the dog watch. Polishing the brasses, sorry but I’ve deliberately blanked the official term for this, is also not that fascinating. Combined with the torrent of names and relationships dumped on me in the first two chapters and my mind was not only numb, it was also bored silly. To save my sanity, I began to skim almost every passage that didn’t have Sally or Dermid’s name in it.

At this point, I seriously reconsidered whether or not I wanted to push on. I almost tossed in the towel but in the back of my mind, that excerpt sparkled and called to me. I wanted the book that had that *&^%$# excerpt in it. Finally I zipped through the rest of the ship Zzzzz and got to the second part.

And here, for me, the book really begins.

Sally and Dermid’s shipboard relationship had been tentative and mixed with misunderstandings and missed signals. After it ended badly, the two headed off, certain they’d never meet again and not sure if they particularly wanted to anyway. Sally was for her graphics job in London while Dermid was headed back to Stornoway which was his home base for his job piloting passenger planes across Scotland. Thinking that she can’t just leave their parting as it happened, Sally writes to Dermid only days before getting the totally unexpected offer of a temporary job on the island. And when Dermid gets the letter and they finally run into each other, wonder of wonders they both act like adults instead of sulking like pouty teenagers. Yes, I had finally found the book I’d been hoping to read.

Luckily for me this section of the book is over 60% of it. Sally gets a crash course in living in a small town, where everyone is related somehow and they all know your business. And since it’s such a small place, anything new is eagerly grabbed up, examined and talked about. The whole town, especially all the little old ladies as well as Dermid’s sister, follow the advance and retreat of the romance with baited breath and hopeful smiles. The trajectory of Sally’s growing acceptance there is outlined by how she’s watched every morning when she arrives in Rosie’s cafe for her morning coffee – at first with frank curiosity for a stranger and then with shy smiles, quiet nods and grins – those especially after Sally and Dermid start kissing each other goodbye on the street.

The romance is two steps forward and one step back but this makes sense as both have had romance issues in the past and neither is in a hurry for possible repeats of that. Dermid thinks – and later Sally echoes – that one night stands are one thing but something as important as love shouldn’t be rushed. The time frame of this part of the story is only about four months but this never feels rushed and pushed to the “instant relationship” stage. Their past issues also give the characters lives before they meet. Sometimes books feel as if characters have just sprung from a vacuum and exist only for the romance. Not so here and this leads to more things I like such as Dermid’s sweetly nosy sister who is a whiz at extracting information and, of course, Dermid’s teenage daughter Mary. The ups and downs of their relationship are some of the most touching of the book and creates solid conflict where Sally is concerned. And this is an older couple! I love that and how poor Dermid doesn’t regret the bliss on the beach but definitely feels it in his legs the next morning.

The people of Stornoway never sink to caricatures. Not all are elaborated on but their actions in the book feel realistic and they don’t blend into Stock Scottish People. But I guess a book set in Scotland wouldn’t be complete without some nod to expectations – met here with the plaids – love the description of an explosion in a paint shop. Plus there’s Highland dancing being done by a bunch of newbies. I would imagine sore shins and lots of bruises were the order of the day that next morning. This section made me want to pull out my Tannahill Weavers collection. And what does dreich mean?

There is, however, a little bit of rain – if you’ll pardon the expression – that damps my total enthusiasm. A few scenes are told from the POV of tertiary characters which added almost nothing to the story. Then comes the Big Mis that leads to the final resolution. Hints about it were sprinkled on the way but it still seemed silly that grown, adult Dermid wouldn’t be able to just say “no” and that Sally Storms Off in a Proverbial Huff. The reactions of the people of Stornoway provide more humor as they back Sally to the hilt but the whole thing comes off more as grade school histrionics.

My extreme reactions to the two parts of the book make a final grade difficult. It’s almost like these are two completely separate books. I almost wish they were. The first part is one I’d never reread without threats of bodily harm if I didn’t. The second, and thank God majority, part is lovely, sweet, realistic and what I was hoping for when I started. I guess a split grade is what’s needed. D/B