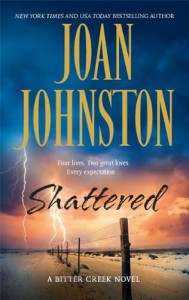 I had really enjoyed Outcast and was looking forward to reading this even though it clearly was part of a long running series, a series with which I don’t have even the passing acquaintance. I can see by the Amazon reviews, however, I should be grateful I wasn’t one of the fans that had followed the series and the build up only to have my expectations completely dashed. I can say that there is nothing about this book that would compel me to pick up another in the Bitter Creek saga.

Kate married poorly to a selfish man who cheated on her. One night she walked into a hotel room that she and her husband were sharing and found her husband with another woman. Her husband just waves her away. Kate proceeds to leave the room, return to the lobby and picks up the handsomest man in the room for a one night stand. Kate gets pregnant by this stranger and eventually delivers twins. Kate stays marries to her philandering husband for some reason. Kate’s mother in law is the former governor of Texas who has higher political ambitions. Her main problem is keeping track of her son. He is supposed to be dead but Kate knows that he is alive. Kate’s mother in law hires someone to find out the paternity of Kate’s twins. It turns out to be Wyatt Shaw, the son of a mob boss.

Wyatt finds out he has twins and guess what? He wants them back. Upon seeing Kate, he realizes he wants her too. He’s never forgotten that one wild night 10 years ago. Unfortunately for Wyatt, Kate is in love with Jack, a Texas Ranger with a black mark on his record. Jack is recently separated from his wife and has found solace in Kate’s arms. As soon as the two of them can arrange a divorce and/or receive confirmation of Kate’s husband’s death, they will marry.

Jack was kicked out of the house by his wife, Holly, because she was afraid to love him. Complicating matters is that when Kate was in a coma from a gunshot wound, Jack and Holly had sex and now Holly is pregnant. Please note that Jack and Kate were purportedly in love with each other at the time of her gunshot wound and subsequent coma. I wonder if coma is secret code for “cheating but not cheating”?

But Kate doesn’t really mind. She’s totally accepting of Jack and knows that he loves her. Problematically when Wyatt shows up, she can’t stop the physical reaction she has toward Wyatt. Oh dear me, how can that be when she is supposed to love Jack?

The fact is that Jack and Kate really have no idea what love is and that would be perfectly fine if learning about true love was part of their character arc. But it’s not. Both are so spineless that in the end, it’s probably good the two didn’t get together because two gormless worms should not live above the earth and procreate.

So Wyatt drags Kate and the two boys to his remote compound near Houston and demands that Kate sleep in the same bed with him. Because Kate is the aforementioned gormless worm, she cries but acquiesces. Apparently in Texas, you are required to sleep in the same bed as a man who impregnated you, even if it is 10 years ago, or else dire consequences ensue. Like getting a spine. It should be noted that Kate is from a very powerful family but at no time does she call on them to help her out. Pride is one reason. Because it’s far better to go and b be forced to sleep in the bed of a man you believe is a criminal and responsible for heinous acts than to ask your family for help.

Of course, Kate cannot be forced to sleep in the same bed as Wyatt without having sex with him again but good girl that she is, she confesses this to Jack who at first gets mad and jealous but then decides that they will work things out.

Let’s turn to Jack and his wife, Holly. Jack and Holly have a 6 year old son and right when Jack needs to get a divorce he finds out that the son has AML and needs a bone marrow transplant. Soap fans will understand where this story goes.

In the end, Jack and Holly rekindle their love. Kate and Wyatt fall in love. At some point, after much sexxoring of the other partners, Jack and Kate confess to each other than they are not in love and wish each other the best. The end. Cue rainbows for everyone.

The characters are completely wooden. No one had any authentic reactions to what was going on in their lives. The plot was completely ridiculous. It read like a cobbled together script of a few episodes of a bad soap combined with a TNT action show.    There was a ton of backslapping by people I assume were from other Bitter Creek novels but had nothing to do with the storyline other than to add “there, there, it will be all rights” along the way.   Lame.   The only thing that would have saved this story is if someone had their head chopped off in the beginning but turned back up at the end to fall in love with Kate’s mother in law or something. D

This book was provided to the reviewer by either the author or publisher. The reviewer did not pay for this book but received it free (and I probably would have been pissed if I had paid for it).