I recommended your first book, “Queen of Shadows”, to the DA readership but now I regret it. The core readership here is romance and I thought QofS had a great romantic subplot in the overall urban fantasy setting. In fact, it easily could have been marketed and sold as a paranormal romance. Shadowflame, however, takes romance readers to a place I think they will regret. This spoilerfilled summary gives the reason why. 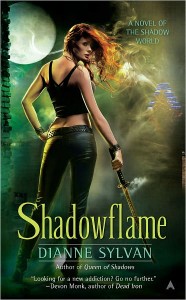 Miranda Grey is human who becomes the vampire Queen to David Solomon, the leader of the vampires of the Southern United States. David is called a Prime and Miranda is chosen to be his mystical mate, a special “Pair”. They are bonded and will be unto their death. Worse, (worse in this story at least) what David feels, Miranda feels and vice versa. Because Miranda and David are newly married, the Prime or Pairs who rule the other territories are coming to pay homage to them.

This story involves two things. First, there are visits from Prime James Hart of the Northeast and Prime Deven O’Donnell, Prime of the Western United States. Second, there is something killing powerful vampires under David’s rule and threatening the safety of both David and Miranda.

Prime James is an utter bastard who terrorizes women and Prime Deven has some serious backstory with David that David has not yet revealed to Miranda. The person(s) who are killing the powerful vampires in the Southern territory are clever and powerful, escaping the detection of David who is one of the more technologically advanced Primes but also one of the more powerful Primes in the world.

There is some suggestion in Queen of Shadows that this series is to be a feminist anthem. Miranda, for example, is a capable Queen, powerful in her own right and ready to rule by David’s side instead of behind him. Most Queens play a silent, supportive role and the Prime ranks are people with old, misogynistic men. Yet, I never understood how Miranda was powerful in her own right. In other words, she was granted power by some mystical being, anything she knows about ruling she has learned from David, and when she finds herself at odds with David, she washes over his actions as if there was nothing amiss.

I never really saw Miranda have any agency, any direction of her own. Yes, she had her music career but even her success in music came from her magical ability to spread a blanket of emotion, whether it be joy or sorrow, amongst the crowd. Not to mention that she was now Queen of the Southern United States. She even acknowledges this:

The music business was all about influence . . . and Miranda had that in spades. There was no door that closed to her, no velvet rope to keep her out no matter how exclusive the club. The Signet held sway in every level of government and the Prime a hand in every game in town, legal or otherwise. It wouldn’t take much effort to have her first single on the Billboard charts the day it was released

To be fair she does learn how to fight and wield her power independent of David.

As for David, his star does not shine very brightly for me in this book, likely diminished to a great degree by what happens in the spoiler. He’s powerful, he’s nerdy, he’s sexy, he’s wanted by everyone, and he’s understanding. Because he is described as practically perfect in every way, he lacks interesting dimension. Possibly that is why you were led to introduce an element regarding a former lover, a former male lover. Making David bisexual, however, doesn’t make him multidimensional, just someone with a broad sexual appetite. That, in and of itself, isn’t enough to make him jump off the page, at least for me.

And then there is this, the spoiler.
[spoiler]

“I don’t want to feel this way,” Deven murmured into David’s chest. “I want to forget we were ever in love and be content with friendship. But I don’t think I can, David. I can keep my distance and I can honor your commitment, but I can’t ever stop loving you.”

David drew back to look at him. There was such anguish in his face, and David felt it just as keenly himself even if it didn’t show. “I know,” he said. “Neither can I.”

He didn’t have a chance to finish the sentence. David’s mouth had already covered his.

So as you can see by the quoted portion, David and Deven have sex. Because apparently they cannot be within the same region without their love overcoming their scruples. When they have their powerful orgasm, both their mated pairs feel it.

He looked over at David. His voice was perfectly even again, perfectly factual. “Incidentally, you’re not going to have to tell Miranda either. You haven’t had time to learn this, but when you have a bond like ours, you can feel when your husband has an orgasm . . . no matter who it’s with.”

Later Miranda is angry yet turned on by David and Deven together. She even goes so far as to suggest maybe David and Deven be allowed to run off together a few times a year to fuck themselves silly. Wat?

What is totally confusing and, I felt, inconsistent is that when Deven met his mate (or Consort as he is called) in Jonathan, he totally forgot about David, pushed him aside and David spent centuries mourning Deven’s loss.

Deven didn’t say anything. For the first time since the night they had met, Deven looked utterly lost . . . and David understood that when it came down to it, Deven would do whatever Jonathan asked, would abandon David again, would sever all ties with the South if Jonathan wanted him to . . . because in the end, David wasn’t the one he was bound to. They could love each other until the stars burned out, but they weren’t, and had never been, mated in soul. They would never live together, nor die together.

I confess I don’t even know what this means. They love each other so much that they can’t keep their hands off each other. They both know what they did was a betrayal of their mates, yet….they aren’t mated in soul? What does that even mean, for the love of all that is holy.

I should add that Miranda is in bed because she is recovering from an attack that has left her weak and injured. It’s like the trifecta of horribleness. David cheats on her with an old flame, in the same house, while she is lying on a sickbed attacked because she is his Queen. Why not just defecate on her? Wouldn’t that show her the same amount of respect?

I recognize this is not billed as a romance, but the entire story is about a fated mate pair! I don’t think its fair to say that an author doesn’t have to deal with the expectations set by the story. If an author introduces something in her books, then she needs to carry it through, needs to deal with it. David and Miranda are bonded for life, their very long, immortal life. This bond is through mystical means. There is some suggestion that one part of the Pair can have feelings for someone outside the mystical mate bond but the repercussions of this are never addressed. The concept of love v. forced mating is never addressed. I was left at the end of the book with a deeply unsatisfying emotional experience and not much respect for either David or Miranda. The idea of the two of them having a love match doesn’t hold much water after this book because there isn’t any good exploration of what love is, how one loves within a mate bond or without. Truth be told, I have no interest in reading the next book, not unless a very trusted friend or five tell me it’s a can’t miss title. D

→ Jane
Previous article: The Things I Learned from RWA 2011
Next Post: KTeen Giveaway