REVIEW: Say It With Diamonds by Lucy King

I felt like this book started out with the heroine as a thief* and the hero as a good guy and then someone told you to SEX it up and all the backstory and character got chopped for paragraph upon paragraph of mental lusting.   There was so much mental lusting, in such an intense and melodramatic tone, that it was surprising to me that either the heroine or the hero could function like regular people.  The heroine, in particular, with her description of her insta lust upon seeing Will (just Will not Your Grace) was in such a state I wondered if an ambulance needed to be called:

At the bolt of desire that thumped her in the stomach Bella went dizzy and stumbled. Would have hit the floor had Will not caught her arm and steadied her.

‘Are you all right?’

Bella dragged in a breath and blinked a couple of times as she fought to wipe her head of the images. Oh, good Lord. She was fantasising. About Will. A duke. So much for thinking she didn’t go for the cynical weary type, she thought dolefully. And so much for sensible and mature.

‘I’m fine,’ she said a little shakily, wriggling away from beneath his grip before she did something really unhinged like deliberately letting her knees collapse and falling into his arms. ‘Absolutely fine. These heels weren’t designed for this carpet, that’s all.’

His gaze was so laser-like, so intense, that it felt as if her clothes were disintegrating in its wake, leaving her standing there in front of him completely naked. And then, at the thought of that, she went so hot and trembly she nearly stumbled all over again. 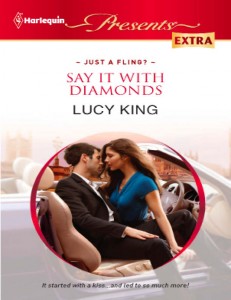 Now that we are all tipsy on our heels from lust, let me describe the plot. The heroine, Bella, is a jewelry designer and appraiser. Is she the best appraiser in all of England? She should be because the hero, Will, is bringing her a collection that is called “legendary”. It is so legendary and valuable that Will carries around some trinkets in his pockets.

The Hawksley Collection is comprised of a number of jewels the Dukes of Hawksley have given to their lovers. Alas, some of those jewels are paste, Bella discovers. Is Will worried about a scandal ensuing if it comes out that some of the jewels in this famed collection are fake? Nah. He’s a billionaire from the Cayman Islands. (also Duke of Hawksley but that is such a stupid throwaway detail that even Will is embarrassed by it. That makes two of us).

Will immediately invites Bella, this random jewelry designer, to come to his bank and view the entire collection to view what is fake and what is not. At this point, I’d be whipping out my non disclosure form but I’m not a billionaire Duke from Cayman Islands and maybe they just don’t care about those things over there.

Fortunately, because the two are so hot for each other, they have sex in Will’s limo. You know, after Will kind of rebuffs Bella and makes her leave the bank to walk home in the rain. But alas, the road to happiness for Will and Bella is not all paste diamonds and sex filled limo rides. Bella is looking to find a man to settle down with and Will, because he is a cheater and from a family of cheaters, has declared himself off limits for a relationship. This does not stop Bella from pursuing Will or Will to become enraged and jealous by Bella toddling off to date another man. But their physical attraction cannot be denied. (Lest the two are put in a hospital)

As she twisted her hair into a thick dark rope her elbow briefly brushed against his shoulder and for one sizzling moment he thought he’d been electrocuted. His entire body burned as if it had gone up in flames and his heart practically stopped.

The conflict between Mr. Commitment Phobe and Ms. Looking for Forever is understandable. I would have liked to have seen more backstory on why she was determined to be married and have a family. I would have liked a few lines that would have established her as premiere expert in her field. I wouldn’t have minded a few paragraphs about why, other than the two suffer this unrelenting lust, that these two actually belong together. I also wouldn’t have minded if the word “besotted” was used less often:

Since when had he contemplated ditching a friend for a woman? And since when had he brought forward a date because he couldn’t wait? Where had his self-control gone? And more disturbingly, where had the idea that he might be besotted with Bella come from? He couldn’t be besotted with her. He’d only just met her. Besides he didn’t get besotted. Ever.

Will let out a growl of frustration. He’d wait until Saturday because he had to. Because that was the plan. Because he wasn’t besotted. And because he had gallons of self-control. Somewhere.

I guess the good thing is that I really knew where these characters stood.  Foolish parts of the story are shown to us like Bella’s conversation with Sam, a date she used to make Will jealous. Other important parts are told to us in summary fashion:

She’d found herself telling him about her peripatetic childhood and the colourful characters that had peppered her upbringing. About how, instead of doing her homework, she’d learned to pick locks, forge cheques and hot-wire cars. Far from being appalled, as she’d rather feared, Will had been fascinated and so, encouraged, she’d gone on to tell him all about her mother and her wildly misspent youth and about how she now lived quietly in Truro, kept goats and grew herbs.

So Bella is a * who now works as an appraiser of legendary jewels.  Will, an English Duke, ran off to the Caymans where he built an empire.  He also has a debilitating phobia that was tossed in to ensure that despite his top lofty and irrational behavior and the fact he cheated on some bipolar chick when he was in his early twenties,  Will is a “good guy.”

I guess this is like an after school special for single women wherein the moral is always have sex in limos with guys who treat you poorly because underneath their irrational behavior lurks a socially damaged and phobic man whose just waiting for the right woman to keep his pants zipped up.  D

* Per the author’s comment, apparently the heroine learned all these law breaking skills but never used them.  I definitely got the impression that she used them but apparently that was an incorrect impression.