It has been a while since the young-adult world has seen some high profile novels in the vein of mystery/suspense.   The 90’s was an epic burnout of the genre, and the book world hasn’t gotten over it entirely.   Slowly but surely   it seems as if the genre is coming back – if not to the feverish pitch it got to in the 90’s.     I’m normally not interested in those types of plots as a centerpiece in young adult fiction, but your book intrigued me because of the striking cover and the concept of the heroine being paralyzed while trying to figure out who killed her. 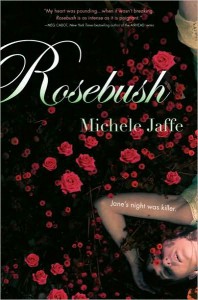 Jane wakes up in the hospital unable to move.   Her body is paralyzed.   She can’t even speak in coherent sentences.     Memory nearly destroyed, she has no way of remembering exactly what happened the night before.   Someone had tried to run over her in a car, causing her to land in a rosebush.   She was left to die,   and has since attempted to figure out exactly what happened.   Her instincts tell her it wasn’t an accident, but everyone else seems to be happy to sweep it under the rug.

Then she sees a message drawn on the mirror in her hospital room’s bathroom.   Taken in for a simple sponge bath after seeing her best friends and family, she lets out her first words when she sees a glaring message promising death.   Whoever tried to murder her is at it again.

Popular old Jane has a lot of enemies.   Her killer could be anyone.   The boyfriend she loves despite his constant abuse.   One or both of her close, gossipy, and very rich friends.   A boy that likes her and pretty much stalks her despite her disinterest.   The step-father that makes her cringe.   No one is safe from Jane’s suspicion as she tries to regain the movement of her body following the traumatic stress of the accident.

Your attempt at creating a sense of intrigue and suspicion is a fair one, and I have to hand it to you for making me unable to guess the murderer in the end.   There were some problems that ultimately contributed to me not finding the novel something I would return to for all-around recommendations, however.

The name of a protagonist can sometimes signify greater things within a book.   In this case, choosing the name Jane was pretty obvious a tool for the greater theme.   She’s a girl that is ultimately average.   She has problems and ambitions, but nothing beyond the imagination or accepted humor.   While it makes the book easy to read and makes her a protagonist that is identifiable, it makes the narrative entirely too lackluster.   There is jut nothing that makes me care about this narrator.   If not for the plot, I probably would have put it down and given it no more thought.   A great narrator can turn a story about washing their socks into an ‘A’ worthy grade if they make it interesting and deep enough.   This is why I focus so much on characterization when I read.   Finding a book with a character like this just feels rather bland.

Her friends aren’t much better.   They are mean girls and do the general trendsetting/teen girl snarking and manipulation.   Nothing too out of place.   A flashback scene later in the novel between Jane and one of these two friends adds some interesting depth.   Mainly, they are a part of the cloak Jane puts around herself.     Jane contributes to the group dynamic and gets included in various popular activities, and the girls get a clique that is impenetrable.   She hides behind them and refuses to look past their kindness to her for a long time, barley realizing that selective kindness isn’t really kindness at all.

The biggest thing in this novel character wise that is both its greatest strength and its greatest weakness involves Jane’s relationships.   For a majority of the book she is dating a guy she claims to be in love with.   At times he can be very sweet.   Very sweet.

He also hits her when he gets angry.   If she doesn’t follow up on plans or has to cancel them, he yells and screams at her like a madman.   He’s fucking scary and I could not see how Jane would go back to him.   She continued to apologize for him while she was lying in a hospital bed and being threatened by a mysterious and insane figure she couldn’t remember.   Really!   She had every opportunity to be safe in a hospital that would know if he visited and could easily trace him to any physical wounds – plus the fact that she could have dumped him over the phone several times.   It just stretched my level of believability.

Not to mention it’s just not addressed.   Yes she gets out of the bad relationship.   Yes there are more hints and it reflects towards an overall personality problem she has to overcome.   That doesn’t mean you just ignore the fact that the type of relationship is totally not okay and should be addressed.   This also nearly happens a second time.   I know a few other readers had various reactions to this, and personally I liked the idea.   The idea.   This idea showed me that you had something you wanted to do.   The book could have been more.   The execution just didn’t work, so I read it as something that was just there.

There were a few other plot points that got on my nerves, too.   Readers of suspense and mystery novels may find this even more annoying, since I see it as a major cop-out in these types of novels.   At least two characters went insane – including the murderer.   In fact, that was probably the only reason they had for doing what they did to Jane.   Major cop-out.   Up until that point, you did a fine job of making everyone have a motive.   Afterwords?   Could care less.

So many flub-ups ultimately made me just not care.   Cardboard   characters and a lot of mistaken plot points just make this a read I don’t care to remember.   I had no emotional attachment to the characters, and the suspense was quickly diminished once what little characterization fell through.   Some readers really enjoyed this book.   I, however, did not.   D+