The first half of this book detailed a setup that I found pretty incredible, so much so that I set the book aside and didn’t finish it for 2 months. The latter half of the story worked far better, but only in isolation. Together, neither the romance nor the worldbuilding held up. 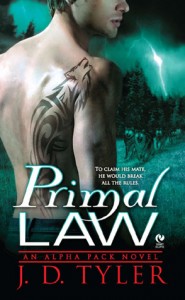 The premise is that there is a bunch of werewolves that were changed from human to shapeshifter after an attack 5 years ago in Aghanistan and they now all have special X-men like powers. Some are pre cogs, some can start fire with their fingers, and so on. Why shapeshifters get additional powers is unexplained, as it is also unexplained why there are other “gifted” people (such as the heroine) who have gifts that are not imparted by a random act in Afghanistan but are simply born with such powers. Someone within the government is gathering these gifted individuals in a compound in Wyoming. There is every sort of being one can think of in this compound: shapeshifters of different sorts, sorcerers, a blue fae prince, vampires, witches, gremlins, and a basilisk.

The story opens with a prologue with some of the Alpha Pack being savaged and dying. The implication is that they all die but Jaxon (I know, the names are ridiculous too). “Her scream of outrage, promising vengeance, and the moans of his dying teammates chased him into the darkness.” When I get to chapter one, though, nearly every member of his team is still alive. I kept flipping back and forth in the book to figure out which ones had died in the prologue and which had not. By the end of the story, I am guessing that none of them died and the point of the prologue is completely lost for me.

The heroine is Kira, a lab assistant at a gene therapy company. She’s stupid but everyone loves her. How stupid? She overhears some of the scientists discussing their evil experiments and sees some document on her boss’s computer that is not consistent with what they are supposed to be studying.

Her brilliant plan had included getting them out of here, not where to go afterward. Or who to give them to.

She decides she will break into her high tech gene therapy company and steal some samples. She has no plan for what she will do with these samples, of course, and her plan to abscond with the samples is no more complicated that waltzing in, taking them, and leaving the way she came in, even though she is going into a restricted area with supposedly high security. Inevitably, she gets caught stealing samples because she is somewhere she is not supposed to be. Having no real plan, she simply runs for an elevator and then drives her car out the front gate. Of course she is chased down and the security guards corner her in a dark Las Vegas alley where, instead of apprehending her, they decide to rape her in the alley. (Still in chapter 1)

Let’s recap. Kira’s escape plan is to drive out the front lot after breaking in. That’s her plan. Break in. Drive away.

Let’s recap. Still in chapter one. Kira is in an alley about to be raped. She is saved by a guy who shifts into a werewolf. He requires her to go with him and three other men to Wyoming. To a secret government compound.  She’s not only totally fine with it, she’s turned on.  Because her thoughts aren’t “what the hell is going on” but this:

All those rippling muscles, that soul patch, spiky black hair, and the wicked ear piercings lending the man that slight air of irreverence. Confidence. Here was a guy who knew how to handle his business.

She’d love to know whether he could handle himself as well in bed as he could out of it.

Once she is at the secret government compound, they just let her wander aimlessly in and out of the buildings until she stumbles upon a place where she supposedly should not be because there is apparently no security at this secret government facility. Keycards are beyond them? She finds a number of strange paranormal beings (see above reference to every creature under the sun) in cells. And they all look very unhappy. Oh noes, thinks Kira. This is just not right. “Why are those poor creatures locked away like criminals? What are you planning to do with them?” Kira demands.

Let’s recap. Kira just found out that there are shapeshifters. She is taken to a secret government facility. She finds crazy strange creatures, some that growl and bare their teeth at her, and she is incensed that they are being caged. Incensed.

While logic may make most people think that Kira should just keep her mouth shut for the time being until she learns a little more about this brave new world to which she has been exposed, this book allows Kira to decide who is going to be set free and who is going to be caged.

Let’s recap. After one day in the compound, Kira, who is a LAB ASSISTANT decides that one of the incarcerated beings, a fae winged creature, should be let free. Because she can sense he is telling the truth about being a good guy. She convinces the leader of this secret government compound that she should be in charge of rehabilitating these beings and she can rehabilitate them in three weeks! SHE IS A LAB ASSISTANT. She is not an expert in paranormal beings. She is not a counselor, therapist, or psychologist. She was a genetic lab assistant.

After talking to the Fae prince who is HANDCUFFED and in a cell, she decides he is sincere that he just wants to be free to live a life away from his murderous daddy. Based on a two page discussion with this guy, she convinces the Alpha Pack guys to LET HIM OUT. Then, as they are leaving the cell block, they run into the woman who is in charge, whom Kira refers to as an “alpha bitch”.

She turned her attention to Zander and Hammer as the others with her exchanged whispers. “Where do you think you’re going with Blue? I didn’t authorize any order for my patient to be moved.”

The woman’s chin lifted, dark eyes snapping with anger. Her tone left no doubt about who ruled this little corner of the compound. Behind her, Mackenzie gave Kira a nod, her expression encouraging.

Kira returned the gesture and turned her attention back to Mac’s friend. She immediately recognized this woman’s type from her own work experience. The names and address had changed but the song remained the same. This steely woman with the short cap of black hair would be the alpha bitch, the one who could choose to make her life here a living hell, or not. Whether or not she was also a fair-minded person and well liked among her colleagues, Kira would soon find out.

All the men in this book are hot and awesome, but a woman in charge is an alpha bitch? Oh no you didn’t! But on her say so, Alpha Bitch agrees that the Fae winged warrior should be let loose in the compound.

In sum, the world building in this book is ridiculous. There are no boundaries in the world. Every sort of creature is included. There are even other dimensions, like the fae dimension, although thankfully unexplored in this book. The melodrama quotient is high. For example, the leader of the Alpha Pack, is this precognitive talent only he never shares his visions because he doesn’t want to unfairly impact those around him. Instead, we are treated to dramatic scenes where the leader sits in his office bemoaning the sad fates that await those for which he cares.

Additionally, new characters are discovered because apparently there are not enough possible sequel baits in the Alpha Pack team. In all, this is very ordinary PNR and in a crowded field, it offers nothing new. It’s the same old group of guys who meet their breedmates and live happy ever after in one big military compound or they die. D