In a recent podcast, Sarah Wendell and I talked about how there are titles we would like to have rebound into collector’s items so that they can sit on our shelves and be read and admired.  Some of your titles would be on that list. After the Night.  Now You See Her.  The Diamond Bay/Kell Sabin series.  Yes, even Dream Man.   But ever since your move to hardcover, I have felt that you’ve taken your work in a direction that I wasn’t prepared.  For that reason, I have a hard time grading “Prey.”  Maybe if I was a mainstream fiction reader or a mainstream thriller reader, I would read this book differently.  My assessment and my disappointment stems from the fact that I wanted more interaction between the male and female protagonists. 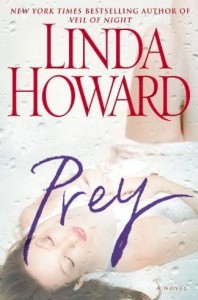 Instead, the book treats me to several scenes from the primary antagonist, an accountant who is fleecing his mobster boss, a long scene from a random hiker, and yes, even a black bear.  I don’t read a lot of mainstream so maybe this is normal? Having scenes from an animal’s point of view.  The bear is an antagonist.  It’s not presented as a particularly loveable, lumbering bear, but one that is intent on eating, well, hikers and whomever else it can get it’s jaws on.

He studied the sheep. He was downwind of the heard, the cold mountain air bringing the scent sharp and clear to his nostrils…He went into a frenzy of destruction, bellowing his rage and frustration
as he took out his killing fury on the vegetation…

I wasn’t sure what I was supposed to take from seeing the bear’s point of view.  Was it to show him as sympathetic? Was it to create increased atmosphere?  Was it some unique literary technique they are experimenting with in the litfic world?

As for the accountant, he was supposed to be very clever, so clever that he as leading his mob boss off to this wilderness trip to go bear hunting and plans to kill the boss and the hunting guide and then will escape to Mexico with his money.  He is afraid of the mob boss’s associates.  Yet, why does he think that shooting the mob boss makes sense? Why not just escape to Mexico?  I was never quite sure why the mob boss went with the accountant. After all, the accountant believed that the mob boss was starting to get suspicious of the accountant’s activities.  Why would the mob boss be by himself?  But when the bear shows up, the accountant thinks to himself that he never planned for a bear despite the fact that they were going BEAR HUNTING.  If you are going out to hunt bears, wouldn’t you plan for bears?

The small glimpses of interaction I saw between the hero and heroine were fun and interesting but so so few.  According to my notes, I was up to 244 of 300+ pages and I think we had about 10 pages of dialogue and interaction between the two.

Angie Powell runs a wilderness hiking business she inherited from her dad and not very well.  She doesn’t recognize her own strengths (catering to families and other women) and instead runs the business focused on hunters and fisherman, like her dad did.  She’s been losing a tremendous amount of business to Dare Callahan, a war veteran, who has set himself as a guide in Montana.  People, particularly the big game hunters, prefer to hire Dare. Plus his website is up to date and his facilities are more modern.  Angie decides to throw in the towel and sell her spread, the land and her home, and move on with her life.  Before her father died, she had been happy as an admin in a Billings hospital.  But before she sells her land, she has a client to guide into the wilderness and that client is the aforementioned accountant and his mobster boss.

Harlen, her friend and Realtor, gets worried about Angie going by herself into the wilderness with two guys and takes his concerns to Dare.   Dare decides to trail Angie, just to make sure she’s okay.  In another life, Angie and Dare would be lovers, not these barely speaking acquaintances.  Dare had asked her out, twice, when he first got to town and had gotten shot down twice.  She still does it for him but he’s too dim, I guess, to figure out that she resents his success.  Or he recognizes it, but is still irked at her refusal to date him? I don’t know. Not much time is spent contemplating this.  Dare isn’t a deep guy and that’s not an insult.  He knows what he wants. He tries to get it and in Angie’s case, he fails.

Angie’s very competent at what she does and maybe in a better economy and without the mortgage her father took out to encumber the land, she could have made it.  She’s a no nonsense kind of girl and while it pains her to give up the land, she knows it is the best thing for her.

I liked Angie and Dare. It was obvious how they were going to end up together. Hinted early on is Dare’s hatred of paperwork.  Good thing that Angie loves doing the admin stuff.  The bear stuff, the not so clever accountant, the danger, none of that turned the pages for me, primarily because the minutae of planning and detail was dry.  I kept reading for more glimpses of Angie and Dare but I felt like I was a desert traveler having to suck the juice out of a cactus.    When I got to the third POV scene from the bear, I was utterly defeated.  There was no hope for me.  Even the cactus juice can’t keep me going at this point.