Halfway through your new fairytale Operation Cinderella, I began to wonder: Where is the woman who wrote Vanquished and what have you done with her?

Vanquished, which you published in 2006, is a kickass historical about a suffragette and the photographer who has been hired to ruin her. The characters, the plot, and the setting in that novel are all excellent; it’s a book I’ve read several times and was thrilled to see is finally available digitally. 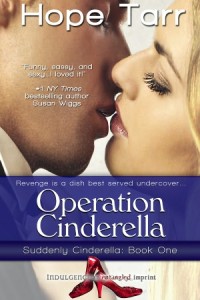 Operation Cinderella is a silly, saccharine, sexist tale that reminded me of a Disney film if Disney films used phrases like “clit tease” and “ass” and “laving tongue.” It’s a book that takes a smart-mouthed, sexually active, brassy Manhattanite and turns her into Ms. Donna Reed, complete with an apron and a talent for making huevos rancheros. By the time I came to the “It’s A Wonderful Life” angels-are-watching-over-you shoutout epilogue, I honestly wondered if the woman who wrote Vanquished had been replaced by a Stepford writer.

Operation Cinderella began with a timely and interesting premise. Macie Graham, the features editor of On Top magazine, “one of the hottest, hippest women’s magazines to come on the scene since Jane,” has a hangover, a belly ring, an all black wardrobe, and a loathing for sanctimonious conservatives. She’s currently enraged by the behavior of the hottest Republican radio star in the country, Ross Mannon. On a recent broadcast, during one of “Ross’s Rants,” the man railed against an article written by Macie.

He’d gotten his hands on a copy of On Top’s current issue, spotted Macie’s feature article on the growing number of parents opting to prevent unwanted pregnancies by putting their teenage daughters on birth control before they had sex—“Forget the Fairy Tale. Teen Sex is Fact, Not Fiction”—and made the magazine the target of that morning’s “Ross’s Rant.” He’d ended by giving out On Top’s website, mailing address, and toll-free phone number, urging his listeners to make their voices heard.

Within minutes the magazine’s overloaded server had crashed and the switchboard had lit up like a billboard in Times Square.

Along with the phone calls, which had ranged from hostile to deranged, there’d been e-mails to the corporate Powers That Be denouncing Macie’s article as trash. Macie hadn’t really worried much about that. On Top’s readership and Ross Mannon’s radio audience were planets apart, a separate species of entertainment news consumer. But when a major advertising account, Beauté, a manufacturer of highend hair care products targeting the “tween” to teen market, pulled the ad spread they ran in every issue, citing the morals clause in their contract and concerns over branding and corporate image, well, that was another story.

Macie is now worried about her job and will do just about anything to save it. So when she hears Ross talking on his show about how difficult it’s been for him to find a suitable nanny for his 15 year old daughter Samantha—he’s been unable to find a “a role model, a lady who models the kind of core values” he talks about on his show–Macie decides to go undercover. She’ll turn herself into pious, sweet, domestically gifted Martha Jane Gray, infiltrate his home, and find out all the nasty dirt on him Macie just knows is there. She calls it “Operation Cinderella.”

The book plummeted from here.

Macie turns to her lovely gay friends (her fairy godfriends) who run a hair salon and, with their help, turns herself into Martha Jane. She cuts her long dyed black hair into a “Martha Stewart” do and has it returned to her natural color, a lovely multi-hued blonde. She pulls out the belly ring, takes off all her heavy makeup, and, presto chango, she’s ready for some serious investigative journalism. Before she leaves, her friends give her a pair of very special shoes.

The vintage ruby velvet-covered high heel was in mint condition and dated from the late thirties or early forties, Macie surmised, based on the styling and exquisite detailing. Amber crystals beaded the strap and the vamp above the peep toe, flashing like flawless canary diamonds.

Smiling broadly, Franc nodded. “Vintage Saks and first worn by the famous film star Maddie Mulligan. She had them on the night she received the news that she was nominated for an Oscar. That same night she received a marriage proposal from international financier Carlos Banks, her fourth and final husband.”

(I think the four husband thing is to make sure readers don’t think the film star is a stand-in for the perennially depressed Judy Garland who married five times.)

Macie heads to DC, has one interview with Ross, who despite having a PhD in sociology and an awareness of the internet, is completely snookered by Martha Jane. He hires her and she moves into his Watergate apartment. Macie, who secretly hires others to do the cooking and cleaning she’s told Ross she’s so fond of, sets about going through Ross’s things and trying to bond with his daughter in order to get her to dish on her dad. The latter is arguably the most morally egregious thing Macie does. Of course, within days of living in the Mannon household Macie has begun to fall for Ross and his spunky rebellious daughter—we know she’s a rebel because the kid has tongue stud and wears heavy black eye-liner.

Ross is not only handsome, he’s perfect (don’t let that silly Republican label fool you–he cares.) He’s just human enough to carry a story—he frets about his lack of parenting skills and often orders pizza for dinner. He thinks Martha Jane is beautiful, sweet, funny, and oh so easy to talk to and if it weren’t for his pesky sense of honor that tells him he shouldn’t date his daughter’s live-in nanny, he’d totally ask her out. Not sleep with her; no! Ross doesn’t do casual relationships; he would just ask her out and treat her like a princess.

Miss Martha Jane deserves to be treated like a Cinderella (after the Prince slipped on her special shoe) because a long time ago in a place called Heavenly, Indiana, something bad happened to Martha Jane Gray—Macie’s real name. In fact, that whole ballsy, tough New York chic act was just a cover caused by the pain in Martha Jane’s past. What Martha Jane has really needed all her life is a good man, a nice apron, and (after he’s declared his undying affection for her) her first orgasm.

There are a few hiccups along the way so the book has some narrative (weak sauce) tension. Will Ross love Martha Jane if he finds out she’s an unethical liar? Can the two find their happy ever after though Ross is a Republican and Macie is a “proud member of NOW”? Does it matter that the shoes aren’t made of glass? But, by the tale’s end, it’s clear good girls get the good guys and the good sex, especially if they learn how to cook.

I can’t think of anyone I’d recommend this book to. (Really, though, do read Vanquished.) I give Operation Cinderella a D.

I’m off to order takeout, let the house got to hell, drink wine, and curse.

→ Dabney
Previous article: Thursday News: Cloud based emails have no protection; 50 Shades sends out C&D in France; Nook $59 at BN
Next Post: REVIEW: Tempting the Player by J. Lynn