A reader recommended this book to me and I can see the appeal of the younger female’s sexual curiosity being met by an older, desirable and experienced Dom. I could not overlook the problems sufficiently to enjoy the story. 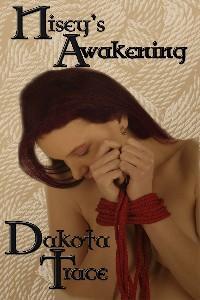 Nisey, while living at her parent’s house, encouraged her boyfriend, Derrick, to explore the BDSM lifestyle and one night he restrains her.  When her parents come home unexpectedly, he leaves her to be discovered as punishment for failing to ensuring they would not be interpreted.  Nisey supposedly becomes adverse to the lifestyle but she still has serious fantasies about her sexuality controlled and dictated by some one else. These fantasies are so powerful Nisey cannot achieve release and she begins to have problems completing regular day to day activities such as eating and sleeping because of it. Luckily her best friend Kalinda has a solution. Kalinda’s brother, Caelan, is a well known Dom in the Chicago area.  Kalinda encourages Nisey to talk to Caelan.

Caelan is of Irish descent and apparently still talks with an accent. I only mention Caelen’s heritage because it is referred to over and over. He’s a “demanding Irish bastard” or that “Irish bastard” to virtually everyone who knows him. He prefers to use the Irish versions of Master/Slave. Nisey refers to him as “that stubborn Irishman”. You would have thought he immigrated yesterday or that his “Irishness” imbued some special qualities.   Caelan doesn’t want to train a newbie and initially he balks over coming between a dom and his sub.  This is a refrain that repeats itself throughout the story as does the issue of punishment.  No matter what a dom is doing to his sub, so long as that relationship exists, no matter what the sub says, no one will interfere in this construct.

What’s troubling is that the relationship between a dom and sub can be corrosive  and dangerous but if the person has submitted to being collared, the nature of the relationship prevents anyone from interfering.  There are several scenes wherein the subs (always females) protest some treatment and the only difference in determining whether the treatment is inhumane is the sub’s reaction. So when Derrick goes after Kalinda and attempts to force sex upon her, Derrick’s sin is that Kalinda isn’t really his sub and that Kalinda doesn’t want to be his sub.  When another dom does virtually the same thing to Kalinda’s roommate, it’s uber sexy because the roommate wanted it.

There were other things that I found troubling outside of the Dom/Sub presentation:

First, the book opens with several rape jokes. Ie. “I wanted this anymore, I’d rape you myself.” This continues for several pages.  “That sounds rather ominous. You’re brother isn’t a serial rapist is he?” She meant it as a joke but was worried when Kalinda fidgeted. “Kalinda?”

The heroine uses a really offensive saying, I was busier than a one-legged man in a butt-kicking contest today.

I should also add that there are rape triggers in the book itself.

The heroine is attacked by her ex boyfriend and the local Dom community catches him. He is punished because the act takes place outside the dom/sub relationship. A female Dom rapes him anally while the hero watches. The scene isn’t described with a lot of detail, but I know this is a trigger.  When Caelan says to Nisey, “‘Safe, Sane, and Consensual’ is more than our motto, Nisey, it is the core of our lifestyle” it should have come with an addendum that sex is also used as punishment to those who transgress.