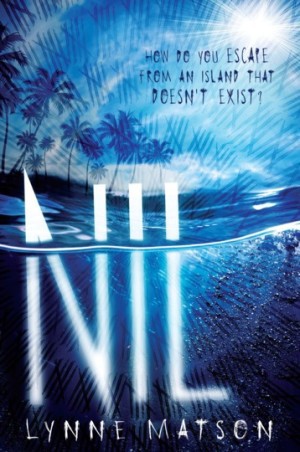 I was a big fan of Lost during its early seasons. My attention wavered as the series progressed, but I do recall my obsession when it first aired fondly. Your novel, Nil, reminded me of Lost and I was interested in seeing how a YA novel would handle it.

Seventeen-year-old Charley is at her local Target, on her way to return some clothes, when she falls through a transdimensional gate in the parking lot. As you do. I wish there were a way to make this sound less ridiculous but that is actually what happens. One minute she’s in a parking lot, the next she feels like she’s on fire.

When Charley wakes up, she’s on an island and naked. Of course she is. Luckily she’s not naked for long because she conveniently manages to find a pair of shorts and cloth she can wrap around her breasts. She then spends the next weeks, trying to gain her bearings and survive. I was actually pretty impressed that a teenaged volleyball player from Georgia could manage to survive on a deserted island by herself and with no supplies.

But it turns out Charley is lucky. The island isn’t deserted. She just hadn’t run into the miniature “city” of teenagers who’d also found themselves mysteriously transported here. From them she learns the ugly truth about the island: she has 365 days to find a gate to take her back home. Because even if she survives that long despite the island’s various pitfalls and traps, it’ll find a way to kill her when one year is up.

If there’s one thing that Nil highlights, it’s this: every story must have a point. Every book must have a driving force that propels the reader to finish it and to feel satisfied when they reach The End. Otherwise why did she spend that time reading?

As I began reading Nil, everything seemed to be in place. Here we have a heroine with a problem. She’s thrown through a gate to a strange island and must find her way home. She meets a hot boy named Thad who she develops feelings for. Another problem! Will they both survive? And even if they get off the island, will they be able to find each other again?

But as I continued, I felt this growing sense of unease. Stories are tricky things. Things need to happen but those things also need to be arranged in a compelling way that — and this is key — tells a cohesive narrative with a point. By the time I was halfway through the book, I was growing increasingly convinced Nil didn’t have a point.

Oh sure, there are attempts at making a point. Why are the kids sent to the island? Is there a reason? Are they supposed to realize something about themselves? Why is this revelation so important? After all, if they can’t figure it out in a year, they die! What is the island? Is it an experiment gone awry? Is it just the unfortunate side effect of a solar flare? Or does it follow Lost‘s lead and is a sort of purgatory? I don’t need a definitive answer but as a reader, I’d like some exploration of these ideas rather than having them haphazardly thrown in my direction. Pick something! Take a stand! Will all readers like it? Doubtful, but at least it’d give me something to digest.

(For the record, I don’t consider Charley’s “We’re here for a reason!” stance and Thad’s “Nah, this island is just screwing with us” outlook to be a worthwhile exploration.)

But even with thematic elements of dubious, unclear worth, I might have forgiven the book if there’d been interesting character dynamics happening. It’s a bunch of teenagers from thirteen to eighteen, from all over the world, thrown together on an island. How do they get along? What culture clashes are there? What personality friction? They set up a miniature city. Surely there’d be factions! Even when people are cooperating, there are disagreements and conflicts simmering under the surface.

Nil barely has any of that. The closest we get is Bart, a member of the city who doesn’t get along with anyone. You can tell he’s trouble because he butts heads with Thad, acts sketchily towards Charley, and tries to steal outbound gates meant for other people. Subtlety is not at all on display here.

For book that’s about survival, Nil is vastly uneven in tone. With the countdown-type premise, you’d think there’d be more urgency. Instead, at times, it read like teens on a vacation. They play volleyball. They surf. They have parties. I’m not saying it has to be doom and gloom all the time, but going from someone dying from a tiger attack to people playing volleyball is a bit of a whiplash.

The nail on the coffin came with the ending, however. I’ve certainly read books where I had mixed feelings for the majority of the narrative but thought the ending was brilliant. That didn’t happen here. The ending fizzled for me and left me wondering, “What did I just read? Why did I just read that?” It was a fail for me.

It’s hard to discuss why without spoilers so I will do so under the cut:

Thad’s time on the island has run out. He’s on his 365th day and has to find an outbound gate. He does but instead of taking it, he pushes Charley through. She wakes up in Switzerland (naked, again), is reunited with her family, grieves (because she thinks Thad is dead), and recovers.

But don’t worry — despite giving his gate to Charley, Thad is lucky and finds another gate. He jumps through and wakes up (naked, of course) in Afghanistan. We have no idea what happens to him during this time period but we are assured that it was Bad, but after a couple months, he tracks Charley down and they have a happy reunion. The End.

As you can see, there’s nothing wrong with the events that happen in that ending exactly. The problem is that it doesn’t live up to the promise of the book and is quite unsatisfactory. Do they deserve a happy ending? Of course. I’m a big fan of happy endings. But I’m not convinced they earned this one.

Nil could have been an epic survival story. Teens struggling to stay alive on an island determined to kill them while trying not to turn on each other. I thought that was the story I was getting. Too bad I was wrong. It didn’t actively make me mad but I definitely felt like I wasted my time reading this. D