I should preface this review with the fact that I am a huge fan of Blood and Chocolate by Annette Curtis Klause. I know I’ve mentioned it before in other reviews of werewolf YA novels, but I’m not sure I’ve specifically articulated how much I love that book. So much so, in fact, that I constantly look for other novels featuring female werewolf protagonists. What can I say? It’s a very strong love. So when I heard your debut featured an alpha female werewolf on the control of assuming control of her pack, I was all over it. How could this possibly go wrong? 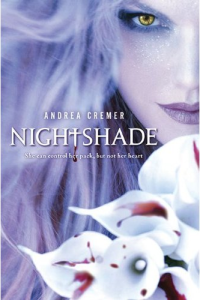 In the world of Nightshade, there are werewolves — called Guardians — who serve witches — called Keepers. The Keepers are in an eternal battle with Searchers, who used to be part of the Keepers until a schism centuries ago led them to split in two. Guardians are charged by Keepers with the duty of protecting sacred sites all over world, especially from Searchers but also from anyone who might stumble across them accidentally. These sacred sites are supposed to be kept secret, you see.

The patrol, however, turns out to be anything but routine. She comes across a human hiker being attacked by a bear and despite what training and pack law tell her she should do, Calla saves his life and reveals the existence of werewolves to him in the process. This wouldn’t be an automatic problem since blood loss and trauma often to lead to hallucinations (a convenient explanation for why he’d imagine a blond girl turning into a white wolf), but Calla is not so lucky. The young man, Shay, turns up at school shortly after as a transfer student.

This is only the beginning of Calla’s boy trouble. The Keepers have decided to be magnaminous and allow the formation of a new, third pack in Vail, consisting of five young werewolves each from both Nightshade and Bane. As the alpha of the Nightshade’s young generation, Calla is set to be mated to the alpha of Bane’s young generation, Ren. In less than a month, to be exact. She’s known this for a while and has prepared for it. But Shay’s arrival complicates that, because now here is something new, mysterious, and forbidden.

It’s not just the third side of love triangle that Shay offers. Shay has a mysterious background. Despite being human, he’s also the nephew of a Keeper. He has a cross tattoo on the back of his neck that he cannot see. Even though his “uncle” is a Keeper, Shay knew nothing of the supernatural world — or his uncle’s true nature — until he met Calla. Searchers are trying to kidnap him. All of this, combined with Shay’s insistence that the Keeper hierarchy must be wrong because how could they force Calla to mate with Ren (not that he has an ulterior motive in that, oh no), lead Calla and Shay to investigate and try to discover the truth.

I thought Nightshade had a solid, well-paced plot. After reading so many young novels where it felt like the majority of the plot was jammed into the last 50 pages after lots of emo introspection, this was really refreshing. My plot-loving heart appreciated that.

Unfortunately, I also realized that while I love plot, I love three-dimensional characters with fully fleshed-out motivations more. Nightshade was missing that. Why did Calla save Shay? In the actual saving scene, she says she does it because she can’t bear to see him die but why? Is it because she wanted to rebel against the Keepers’ strict regime? Did she do it because it was the right thing to do? Was it a mere whim? Was it because Shay is beautiful? I would be willing to accept any of these explanations, but nothing in the text ever made it clear. Until Shay came along, Calla never rebelled against the Keepers. She accepted their rule and in fact, she has many arguments with Shay about their mission. Nor does Calla strike me to have a strong streak of righteouness or justice. The Keepers commit all sorts of atrocities in front of them. Beauty? Calla shows no sign of being particularly interested in physical beauty. I am ready to accept any number of explanations but I have to be given something to work with. I cannot just pull random motivations out of thin air and apply it to a story.

This problem worsens as the book continues. Calla’s lack of character motivation for doing what she does becomes glaringly apparent. Why? Because as the book goes on, the story becomes less about Calla, the alpha female werewolf, and more about Shay, the human boy with a mysterious destiny. In fact, the narrative stops being about Calla’s journey and growth as a person and focuses on her helping Shay learn his destiny. There’s nothing wrong with that story. Plenty of books exist where the protagonist isn’t the driving force of the plot. But that’s not why I picked up this book, and it makes me wonder why bother making Calla an alpha werewolf in the first place if she can’t be an alpha werewolf. For example: when facing down a supernatural monster, who’s more likely to defeat the monster? The human or the werewolf? I would answer one way based on common sense and the novel’s opening scene but I’d be wrong. I guess when it comes to real, plot-related danger, as opposed to “how they met” scenes, the guy must always rescue the girl.

As you can probably surmise, I’m not a big fan of Shay. And to be honest, the love triangle really irritated me. I’ll be the first to admit that I’m tired of love triangles. I realize they provide easy emotional conflict but enough already. My main problem with this love triangle is that it felt forced and manufactured.

Ren is the Bane’s young alpha male — hot, womanizing, but completely adores Calla. Calla has known him since they were kids and knows that they will be mates. And she throws all that away for a guy she meets on a mountaintop? My suspension of disbelief was stretched already because of that but it snapped when we’re supposed to believe Shay is a better choice than Ren. Yes, Ren wants to dominate her in the way an alpha male does but I think that desire comes from insecurity because Calla is the only girl around not fainting at his feet. He challenges her but he doesn’t push her beyond her limits. It’s obvious he wants their mating and partnership to work and is willing to work for it because he knows Calla is upset that because of pack hierarchy, Ren (as the alpha male) will rank higher than her (as the alpha female). In the end, Ren respects her, as a werewolf and as a person.

Shay, on the other hand, does not, not in any way I could see. When Calla tells him that he has to stop touching her, Shay replies that he can’t promise that and keeps touching her anyway. He insults the werewolves and their unquestioning loyalty to the Keepers. He calls her a coward and needles her when she doesn’t want to do something. He only relents when Calla gets upset or starts crying. Sometimes he even apologizes, but that doesn’t stop him from starting up again five pages later. No matter how much the text may insist that Shay is special, beautiful, smart, sensitive, and nature-loving, I judge a character by their actions. And based on his actions and the way he treats Calla, Shay is a jerk.

Don’t get me wrong. I do appreciate the genuine attempt to make a love triangle grey. Typically, when a heroine has two possible choices, it’s fairly obvious early on which one she’ll end up with. Here, it’s not so clear… until you look at page time and realize one guy has had far more on-scene interaction with the heroine than the other.

And the ending? I was already frustrated by this book but when I reached the ending, I threw the book across the room. I said it earlier but I don’t understand why you would make the protagonist an alpha female werewolf if her only purpose is to show how awesome the human boy is. I don’t care if he’s a love interest and the likely ultimate choice. She is a werewolf. Why in the world would a human be better at facing the supernatural than someone who is part-supernatural herself? So for me, the ending was awful. Other readers not so angered by the narrative subtext, however, may consider it a cliffhanger. Just fair warning.

Because this is a debut, there’s no way of knowing where you intend to go from here. If it’s meant to play out the way it’s been set up, I have no interest in reading further. This book was so frustrating to read that the thought of reading two more novels along this vein destroys my will to live. If there’s meant to some sort reversal in the following two books, I will say that’s an ambitious goal and leave it at that. Simply because the readers most likely to appreciate such a reversal are not likely to stick it out to reach that point. Like me. D