Note: January is a new reviewer at DA. She will be providing reviews at least once a month if not more often.

I wanted to love this book. I really did. You are both well known names in the industry, and both of you have high praise for your novels. I thought this might be a dynamite pairing. And it has potential. The concept is not an overdone one: a romance in a post-apocalyptic setting. I can get behind that. But I felt like the treatment of it was ham-handed at best. I’m having a hard time mentally articulating what I found so irksome about this book, so I thought I would make you a top five list instead of recapping the plot.

There are spoilers everywhere, so please do not read further if you are not interested. 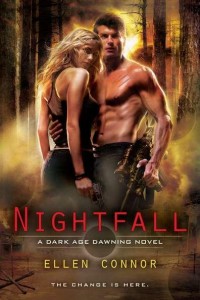 1) There is no apocalypse you don’t like: famine, plague, werewolves, technology, etc. My problem was that you didn’t stick with just one. Apparently cars stopped working and so did electricity. However, not all electricity stopped working. Radios and SOME cars still work. Guns still work. Generators work? I guess it is a discretionary apocalypse. I don’t know. And then if that wasn’t enough of an apocalypse, everyone is turning into nightmare wolf-dog-things. Which is brought on by an infectious disease that has wiped out cities. And the heroine is also developing psychic powers. I guess this would have worked for me better if you’d stuck with just one aspect and developed it. Instead, we have a constantly mutating – pun intended – apocalypse that I had a hard time following.

2) Tru – Why is he a POV character? I found him smirky and annoying and a massive cliché (he’s the token Goth teenager in the apocalypse, of course). Then I read the descriptions of the next two books and realized that you were setting him up to be a hero for the third book. Eh. Are goths even edgy anymore? I think Hot Topic is about as edgy as American Eagle nowadays. 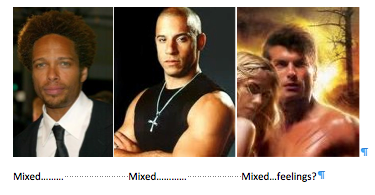 One of these things is not like the other. And that sucks, but I know it is not the author’s fault. So I keep reading…and then felt a twinge of concern. When his race does come up, it’s in a negative context. Let me show you a few quotes.

“When the dark man comes for you, don’t be afraid.”

This is part of the prophecy that Jenna’s father left for her. I cringed. The dark man??? What does his race have to do with the prophecy? Why can’t it just be ‘When the stranger comes for you, don’t be afraid?’

But it gets better/worse.

“I never knew my folks and grew up in foster care,” he said, his throat tight. “A lot of being smacked around, but not a lot of supervision. I knocked off my first convenience store when I was fourteen.”

I just don’t know what to think. Now not only is he the ‘dark man’, he is a criminal brought up in foster homes. You want a clichéd mixed-race hero? Here you go.

Mind you, this book is not chock-full of racefail. Those are really the only mentions of Mason’s past, and I suppose that’s why I don’t know what to make of it. It happens early in the book and I read the rest of the story warily as a result.

But don’t worry – Mason’s the most likable one in the story! Especially compared to…

2) The heroine, Jenna. God. I wanted to slap her. Repeatedly. She is blonde, and privileged, and naturally can do anything and everything tossed in her direction. Mason thinks she is perfect and beautiful and he is not worthy of someone as perfect as her. She becomes the leader of the group when Mason wants to leave everyone behind. She is the nurturer and den mother and defender all in one. She’s perfect. Literally. Even when she’s described, she’s described as perfect.

“…her eyes closing and her priceless-work-of-art chest expelling a long exhale.”

Not only is she perfect, but she develops special powers. She can hear Mason’s thoughts and can communicate with him. And later on, Jenna has a plot development that makes me totally roll my eyes so hard I feared they would fall out of my head.


[spoiler]Jenna gets bitten by one of the wolf creatures. Everyone else that has been bitten has turned into a monster or died horribly. Perfect Jenna acquires the ability to shapechange into a wolf. A perfect white wolf. Who can communicate with the hero thanks to her telepathy. The apocalypse just handed her another special power. Lucky Jenna.

But then it gets even better. Here’s a second spoiler for you. Mason gets bitten by the things repeatedly. He is sick and dying for days, and so Jenna decides to perform blood magic on him and uses her blood to seal his wounds with magic. How does she do this? She doesn’t know. It just works because it is magic and Perfect Jenna must have her mate. It is not explained at any point, it just is. When Mason recovers, he cannot turn into a wolf like Jenna. She is the only one. She is special.

1) The similes and metaphors drove me crazy. Every time I ran into a very obvious one, it threw me out of the story and I wanted to call a friend and tell them how awful they were. Can they be that bad? You tell me. Here’s some of my favorites.

Should you name check your namesake in your book? My gut tells me no. Someone please come and trade me your thoughts on the matter. We can share them…like bread recipes.

Reading this might make you think I loathed the book. Not true. While I did roll my eyes quite a bit, I kept picking it up to see what would happen next. I feel I should give the authors credit for showing people struggling to fight in an apocalypse, rather than taking the easy way out and showing it a few years later. The story itself was fairly fast paced and full of action. If you are looking for apocalypse romance, this is a very good place to start. I just wish I had connected with the characters, the writing, or the world more than I did. Instead, I did not connect with any of it. Am I on board for the next one in the series? Despite my mocking…probably. So that is a point in its favor, right? Right.