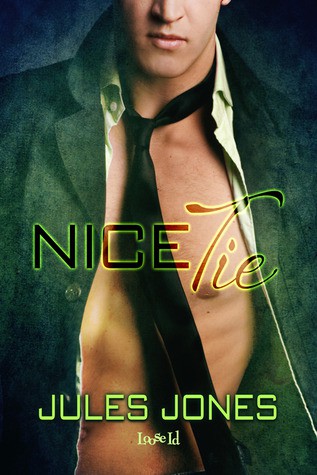 I was intrigued by the premise of this novella because I often find reading about kinks fascinating — the intense excitement they create, and how seemingly random yet intricately developed they are. Who would have thought that a story about someone with a unusual fetish could turn out to be so dull?

It begins promisingly, with Alex noticing a fellow frequent bus rider who often does up his tie during the ride:

Eye Candy pulled the tie looser so that it hung slack around his neck. But rather than pulling it over his head, he undid the knot and slid the tie free of his collar, giving it a quick snap in front of him to shake out any wrinkles. Alex approved of this sartorial thoughtfulness. The tie looked as if it was silk, smooth and lustrous. It was a deep red silk that suited the man’s skin tone. It deserved to be shown off at its best.

So far so good — the level of detail is believable, and put me into the head space of someone who finds this exciting. Unfortunately, it didn’t even try to keep me there.

“Eye Candy” turns out to be Robin Woods, Alex’s new client, and he recognizes Alex almost immediately: “You’re the guy on the bus who gets a hard-on watching me do my tie up!” This seemed startlingly quick and unsubtle in light of the book’s beginning, but in fact the pacing of the entire novella is off. When they have sex for the first time, Robin’s tie is disposed of in five terse paragraphs — one fewer paragraph than is devoted to Alex making Robin a cup of tea. And that’s pretty much it for the tie, but it’s only the first of many times he makes Robin a warm drink. We get to read about every single one of them.

“Prosaic reality,” thinks Alex when Robin suggests he drink his tea before it’s cold, and sadly it’s also dry, prosaic writing. I think the intent is to create a mood of growing friendship and warmth, but there’s no spark or wit to keep it interesting. Just detail after minute detail:

Robin pulled himself out of bed, took the mug with him, and headed for the bathroom. A few minutes later he was back, bearing a rinsed mug, which he set on the the tray before coming back to bed.

Alex went to clean his own mug and teeth. He got back to the bed and put out the light.

The second half of the story gets a bit of conflict with the arrival of Robin’s controlling ex, but much of it is spent reiterating and dissecting information the reader already knows. Although I appreciate the inclusion of a monogamous bi character (Robin) and the attempt to write an m/m story about more everyday, realistic issues facing “almost middle-aged” men, such as potential conflicts of interest at work, domestic violence, and navigating fidelity, this often has more of the feel of a how-to manual than fiction.

I’m not sure who the audience for this story is. I don’t think it meets the minimum definition for a romance — the relationship never progresses beyond friends with benefits — and as erotica, it was largely unerotic. Unless, perhaps, you have a comforting warm drink fetish. D