When Sarah Frantz stopped reviewing for Dear Author and took a new position as editor at Riptide Publishing (where she is now Acquisitions Editor), we instituted a one-year moratorium on reviewing books from Riptide. The moratorium ended earlier this month, and a Tucker Springs book seemed like a great way to reacquaint myself with the Riptide list. I’d really enjoyed the Dark Soul series, and while the Tucker Springs books are very different, they are squarely within my preferred m/m sub genre, the contemporary. I wish I could say that my reading experience lived up to my hopes, but there were too many hot buttons and problematic moments for me to enjoy Never A Hero. 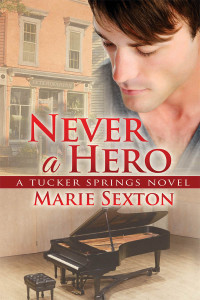 The book is narrated in the first person by Owen, a shy, housebound man in his late 20s who is extremely self-conscious about his physical disability. Owen was born with a congenital amputation of his right arm and lacks a hand and forearm (his arm ends a couple of inches below his elbow). The stares and curiosity of strangers have been exacerbated by his mother’s distaste and her unending criticism, which became even more severe in Owen’s teens after she discovered that he was homosexual. Owen’s father was more supportive and loving but he did little to stem the tide of verbal and emotional abuse. Owen escaped by going to college in Tucker Springs and stayed in town after he graduated. He has a computer-based job he does from home, he has his food delivered, and he avoids contact with other people.

When the book opens, Owen is watching his downstairs neighbor, Rachel, move out. Owen has fantasized about Rachel because he thinks that if he is straight and finds a girlfriend his life will improve, and Rachel is right there. Rachel barely knows who he is and doesn’t even know his real name, calling him Erwin when she drops off the extra keys. But Owen is not much better; for all his fantasizing and nights spent listening to Rachel play the piano, he only realizes when he sees her at his door that she is older than he thought and has gray hair. She isn’t a person to him at all, just a symbolic representation of a hypothetically better life.

Rachel moves out and Nick, a handsome, studly veterinarian moves in. The friends who help Nick move are apparently all stars of their own Tucker Springs installments, but I didn’t have any trouble making sense of this book because it focuses almost exclusively on Nick and Owen and their families (there is a third character, Nathan, who appears to be in line for his own book). Providentially, Nick has a sister with the same congenital amputation as Owen, so he is able to ignore Owen’s keep-off-the-lawn signals fairly easily and the two become friendly and flirtatious.

Up to this point I found Owen’s situation a bit over the top in places, but given Tucker Springs is clearly a fantasy world, I tried to go with it. I found it hard to understand how Owen had had the gumption to get out of his home town of Laramie, Wyoming and away from his mother but then didn’t become even a little more sociable and comfortable around people after ten years in Tucker Springs. I also found it hard to believe that someone who has been missing a hand and forearm since birth never found a wallet that he can operate one-handed, never learned to talk to small children about his arm, never learned to eat one-handed. He lives in a state with its share of veterans with amputated limbs, but in a decade he has not made any effort to find a prosthetic that he’s comfortable with. Clearly this setup is designed to let Nick be The One, which made me uncomfortable, but I read on. I’m not a fan of the setup where a disabled person overcomes a belief in his or her unlovability through the love of a non-disabled person, but this book takes a slightly different approach with the introduction of Nick’s sister, June.

June is your basic Manic Pixie Dream Girl type, adapted for the m/m environment. Whereas Owen shies away from engaging with people or showing his arm in public, June is lively, outgoing, and in-your-face about hers. When a child stares, she tells him it’s the result of a shark attack. She talks Owen into taking piano lessons so that they can learn to play a piece written for one performer as a duet. Meanwhile, Nick persuades Owen to go out to dinner and a party, and Owen slowly starts to emerge from his self-imposed exile.

Unfortunately, when Nick and Owen ‘fess up to their attraction to each other and start to get a little physical, the book goes off the rails. You see, Nick also has a Big Issue, one he has kept secret and which inhibits him from moving forward in a romance with Owen. I’m putting my discussion under the spoiler cut because it is a turning point in the book and potential readers will want to avoid this.

Nick is HIV-positive and has been for five years. It’s the result of a week-long encounter during a Cancun vacation where the condoms ran out and he and his partner barebacked (apparently Cancun had a condom shortage at that time). Nick feels horribly guilty about his reckless behavior, which has made his family fear for his life and caused his wonderful mother to age ten years.

I found it somewhat problematic that Nick was so obsessed with his own guilt. Yes, it was a stupid thing to do, but we all take risks that don’t pay off; it doesn’t mean we deserve it if something bad happens to us. Nick beating himself up for contracting HIV is like a woman who gets raped blaming herself for walking down the “wrong” street. Everyone makes mistakes. Saying all the consequences of those mistakes are deserved is blaming the victim and sends a terrible message, in my opinion.

But that’s not even close to the worst thing about this part of the storyline. First, Nick is a veterinarian, which means he went through a demanding medical-school training. And yet, when he tells Owen the big secret, he first tells him he has AIDS. Then he says that he’s HIV-positive. Throughout the book, HIV and AIDS are used interchangeably, as in sometimes people call Nick’s condition AIDS, sometimes they call it HIV-positive. The idea that in 2012/2013 a gay man who is a doctor of veterinary medicine doesn’t know the difference is astounding to me. It certainly ramps up the angst and causes conflict, but it’s false and misleading to do it this way. Many men live with HIV for years, even decades, without developing AIDS.

Nick can talk about his viral load, but he conflates the difference between a virus and a disease? I sure as hell wouldn’t trust my pets with a veterinarian who makes this kind of error; no wonder he’s keeping it a secret.

Second, Nick gives Owen a blow job before he tells him about his HIV status. This is absolutely a No Go. The fact that he knows his viral load is low and that the risk of transmission is low is beside the point. It’s Owen’s risk to assess, not Nick’s.

Third, there is a scene that feels uncomfortably like the Oppression Olympics when Owen refuses to interact with Nick after the latter tells him about his HIV status. June berates him for being unsupportive:

“You suddenly decided you couldn’t be friends with him because he has HIV? You think you’re too good for him now?”

“No, but I think he should have told me sooner.”

“You have any idea what his privacy means to him? Have you even considered what it’s like for him, being ‘that guy with AIDS’?”

“Maybe a bit like being ‘that guy with one arm.’”

I hung my head again, even more ashamed than before.

As a reader, am I supposed to gather from this that having AIDS (actually HIV, which is not immediately visible) is worse than being an amputee? Why is this comparison even being made? Presumably for plot reasons, because Owen gets the message, feels guilty, and makes up with Nick.

After this, I had very little interest in whether Owen and Nick overcame their individual and collective traumas and found their HEA, especially since I couldn’t fathom how two such screwed up people could create a healthy, loving relationship. Had it been up to me I would have required psychological counseling for both of them, with an extra dose of anti-narcissism treatment, and then let them reconvene after they made substantial progress. Maybe.

Of course, they do get their HEA, but not before Owen’s Evil Mother and Ineffectual Father show up for their turns on the stage. Owen’s mother is not only as bad as he made her out to be, she’s worse. Take every negative female characterization you’ve seen in an m/m and roll it into one person, and you’ve approximated what is on the page here. It was so extreme a caricature it was almost amusing, except I don’t find one-dimensional, un-nuanced women in m/m amusing. They’re almost always plot devices, ways to ramp up the conflict and bring the main characters together, and that’s the role Evil Mother plays here. Ineffectual Father is mostly pathetic; his Big Secret apparently makes him unable to think of any but the most trivial ways of connecting with his son and deflecting the abuse.

And just in case Evil Mother and Manic Pixie Dream Girl Sister didn’t set my teeth on edge enough, the last paragraph of the book brings back Rachel, only to insult her. Presumably the exchange was supposed to be funny, but with everything that had gone before, it didn’t read that way to me at all. I closed the book feeling as if I’d participated in a pile-on of my gender, which is the last thing I want from a romance, m/m or otherwise. Grade: D