I am a logical person ergo I like my books to make sense. When characters do something, I want to understand them, see the path of their motivations. If they are confused, then I want to see them acknowledge their confusion, not blunder onward as if they are a drunken beast shambling down the road. In Naked Games,  I questioned the characters’ actions about every other chapter. 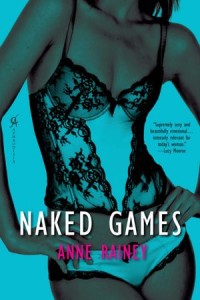 About two months after her parents’ death, Catherine Michaels learns from her family doctor that she was adopted. Initially expressing anger at her parents, Catherine and her best friend Mary search the family home and find evidence of Catherine’s private adoption. The letters left in a secret drawer in her mother’s room reveal that Catherine’s biological mother was dead from liver failure but that she has a half sister, Gracie.  Catherine discovers that Gracie is alive and engaged to be married to Wade who has two siblings: Dean and Deanna. Deanna is coupled with Dean’s former military buddy, Jonah. Jonah and Wade are private investigators and Dean is a contractor.  It was obvious that both Deanna and Gracie were the stars of previous books.

The story starts out with Dean walking in on his woman with a ring in his pocket.  He is about to propose but instead, of course, finds her in bed with another man. Dean determines all women are untrustworthy.  When Catherine comes to meet Gracie, Dean is sure that Catherine is hiding something despite Catherine being thoroughly checked out by his family members who are actual private investigators.  Thus, their business is finding out the secrets of individuals.  Catherine has no secrets.  She is a law abiding citizen with a large bank account thanks to insurance proceeds and her own successful web design business.

After first meeting Dean and being insulted by him and then kissed by him, Catherine then decides to go spend the night with him.   WTF Catherine. This is your only family and if you want to spend holidays with them, does it make sense to fall into bed with the lone single brother in law to be of your newly found sister? Catherine doesn’t think about these issues.  WTF Dean. Why sleep with Catherine if you think she is totally untrustworthy. If it is just a booty call, surely there are plenty of hot women around town you could bring to your bed?

After the two of them sleep togehter, Catherine overhears Dean telling his sister Deanna he is going to get answers about Catherine. This makes Catherine run away. Dean resolves to make this better but before going after Catherine, he makes a detour to Jonah.  Find out all you can about her, Dean demands of Jonah. I know she is hiding something he reasserts. Then he leaves to convince Catherine that he was wrong and he deserves another chance. WTF Dean. If you don’t trust her, why are you going to her to beg forgiveness and ask for her to consider that your one night hookup with her was more meaningful than just a physical connection?  WTF Catherine. Why are you letting this jackhole into your room and into your body?

I think I am supposed to feel conflicted like Dean, only I’m not conflicted at all. I’m thinking Dean’s an asshole and Catherine is a dumbass.  The two continue on in stumbling in and out of bed with one another despite their obvious misgivings and in order for Dean to look like a hero, a suspense element is thrown in.  While the book had no apparent copyediting or grammatical errors, the storyline failed for me.  D.