REVIEW: My One and Only by Kristan Higgins

Let me try to articulate in the beginning what I liked about this book because most of the review is going to be what I didn’t like. After I finished the book, I emailed a friend of mine and said that this book really disappointed me.   It’s like everything I love about your books got turned around and made into a bad caricature.   What I did like is that I felt the heroine’s position as an attorney was rendered authentically; that she was independent; and goal oriented.   I kind of liked her sister but she isn’t given much screen time. I really like reconciliation stories and this is about a divorce attorney and her former husband getting back together. Yay! Right? Only not so much. 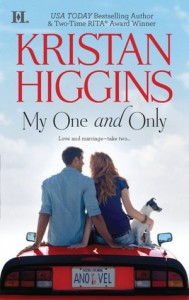 Maybe you haven’t heard but some people complain that your books aren’t very feminist in that they portray only one type of woman and that is a woman who seeks fulfillment and completion by becoming a pair.   I haven’t agreed with these past complaints because there is nothing anti feminist with wanting to share your life with someone special but this book kind of puts some credence into those complaints.

It is about a divorce attorney, Harper James, who hates marriage and believes that every marriage will ultimately end in divorce.   She even goes about interjecting herself into strangers’ conversations to tell them how doomed their marriage is.   But the book starts out with Harper trying to convince her firefighter boyfriend to marry her.   This is the first of many internal character inconsistencies.   What am I supposed to take from this? That the heroine doesn’t practice what she preaches?   It may have made sense if she actually loved her firefighter boyfriend, but she doesn’t.   In fact, she only likes how he looks (hot) and how she feels when she’s with him (self important).   She views him as beneath her (because she is so much smarter than he is).   If anything, these actions show me that Harper is a shallow woman who is emotionally insecure.   Even that would be okay if that was her character arc.   Instead, her character arc is to come to grips with the fact she doesn’t like commitment.   The reason she is anti commitment is because her mother abandoned the her when she was a child.   Since then Harper James has convinced herself she doesn’t believe in love, marriage and happy ever after.

Of course, the perfect conflict for this book is to make the divorce attorney who doesn’t believe in marriage to fall in love and get married which she did twelve years ago to Nick Lowery.   Nick swept Harper off her feet and convinced her that marriage would work for the two of them.   Within six months, however, Harper had given up on the marriage and filed for divorce.   Nick blames her for the decline of their marriage.   The entire book is spent trying to convince us that Harper was pretty much solely responsible for the downfall of the marriage.   It is this characterization, this message, that drove me completely nuts in this book.   Nick was a new architect. He spent every waking minute of his day working.   He misses birthdays, dates, special events.   He has moved Harper from Boston to New York and she knows no one.   She puts off going to law school for a year.   Her entire world changes for him yet he makes no concessions for that. Instead, he expects her to understand that he is trying to build a career and she should have been supportive.   Instead, Harper gets a job waitressing and she never tells her co workers that she is married.    He caught her getting kissed by one of the co workers, none of whom he had ever met because he was working 24 hours a day 7 days a week and packs up his things and leaves.

They meet again when Nick’s brother marries Harper’s sister and this is the path of their reconciliation.   We get pages of pages of how she ruined the marriage, how she cheated on him, how she’s emotionally stunted and it’s never his fault.     Toward the end, he says that he should have spent more time with her, but it felt like a half assed attempt, at best, to save face for Nick.   I could not stand the hero in this book.   I was reading a paper ARC and wanted to rip the pages out at some points.

I wasn’t ever convinced that Harper was the evil witch that it seemed I was supposed to think she was.   Instead I saw her as a lonely, heartsick young woman whose love never got any sun.   She matured into a cynical woman but part of her change was caused by Nick and the story’s glorification of Nick’s character juxtaposed with the villification of Harper’s character was very offensive to me.     In fact, part of the character change that I wanted to see in Nick occurred in the frigging epilogue.   To have that was like rubbing salt in my exposed wound.   D