REVIEW: Mitch Rebecki gets a life by Julie Bozza 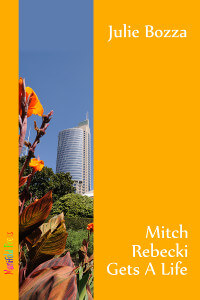 Investigative journalist Mitch Rebecki loves his job and loves New York. He doesn’t mind making enemies, either. When a crime boss threatens retaliation, Mitch’s editor sends him out of harm’s way to Sydney. In exile and resentfully working on lifestyle pieces, Mitch is miserable. But he makes a friend or two, meets a man … and discovers that Australians do organized crime, too, in a small way. Mitch soon finds himself in too deep on all counts, and trying to head home again seems the only solution.

PLEASE NOTE THAT THERE ARE A LOT OF SPOILERS IN THIS REVIEW . I DECIDED THAT IT DOES NOT EVEN MAKE SENSE TO USE SPOILER TAGS.

I am a little sad to write this review, because I have bought, read, and enjoyed almost every book you’ve published with Manifold press. Unfortunately this book ended up being a disappointment. I want to make it very clear that it has nothing to do with the quality of your writing – that felt just as smooth and polished as ever to me. I however had very few doubts about my grade because I had several problems with plot and characterization in this story.

The problems started early. As the blurb states, Mitch Rebecki is a journalist who wrote an article exposing a mafia boss before the FBI was quite ready to prosecute him. Mafia people started to threaten Mitch – first they killed his cat and sent it to him in a box and then they sent him a fake bomb (what could be made into a bomb I guess). Then, when Mitch asks the FBI for help they pretty much shrug it off (not much we can do). Seriously, FBI? Okay, you do not feel your case is ready yet, I get that, but you do not think those things could be the reason to hide Mitch before the prosecution has something to move on? I have no idea whether such stupidity can/did/may happen in real life. What I was sure about is that I did not find such a setup convincing.

My problems had just begun, however. I am sure that Sydney is a beautiful city, it is definitely on the short list of places I want to visit one day. But I was really bored when I was reading about Mitch doing research for his lifestyle pieces. I was bored and wondered what these parts added to the story.

Being an investigative journalist, Mitch of course eventually stumbles upon an Australian mafia person to investigate and expose. I thought that the story would pick up some action and suspense here. It has a little bit of that, but it happened somewhere in the last twenty percent of the book and by then it was too late for me.

But, you may ask me, what about the romance? My answer is that it was there – maybe, kind of. It was ridiculous, really. The photographer assigned to work with Mitch in Sydney suggests he do a piece on Australian architecture by interviewing Rory Pierce. Pierce is a famous architect who was previously married to their editor and whom this woman (the photographer) has a crush on, or is in love with to be more precise.

I felt that romance storyline moved with the speed of light and was over in a blink of an eye (and I am not exaggerating much). Somewhere around the forty percent point of the book they meet, Mitch thinks Rory is gorgeous, very soon after that Rory manages to sleep with the photographer (have I mentioned that she commits suicide shortly after that?) and then Rory and Mitch are in love very soon after that.

I also want to stress that I do not care if the romance storyline is not very important in books like this, but I need other stuff in the story to occupy my attention and here it did not happen, so I was left frustrated with the lack of romance and bored or annoyed by everything else.

As a last comment I want to note that Adena Nacano, the Sydney policewoman in Mitch’s neighborhood, was in a serious competition for the “most stupid law enforcement officer” trophy with the American FBI people. Okay, so she was suspicious of Mitch because Australian Immigration Service called her after he moved in the area, fine, I get that. After Mitch’s editor sent him to Sydney to hide him, as the FBI should have done, Mitch asked if the FBI could at least give him a new passport and they agreed to do that as a favor (how grand of them). They however forgot or did not bother to call Australian Immigration to warn them that there was a reason why a person with a brand new passport is entering their country.

Adena calls the American witness protection 1-800 number (don’t ask) and as evasive as they were, she got a clear message to let it be and leave Mitch under his new name alone, because you know, that way lies danger for Mitch. Do you think she stops? Nope, the idiot still thinks that she is entitled to Mitch’s real identity (?!). I was so annoyed at that point. I did not even care that at the end she helped Mitch with his Australian mafia problem – I wanted her to drop dead at that point in the story.

But wait, if you are expecting a happy ending in the romance department, don’t. Maybe it was a sequel bait, but that thought only annoyed me more.