REVIEW: Masque of the Red Death by Bethany Griffin

I’m a big Edgar Allan Poe fan. Any book with a title referencing him is always going to get a second look from me. Combined with a striking cover, it’s almost guaranteed I will pick it up. I initially thought Masque of the Red Death was a debut, but your name sounded familiar so I did a quick search. I discovered I’d reviewed your debut (a contemporary YA) a few years ago. And while I didn’t much care for that novel, I’m always willing to give an author another try, especially if their next work is something different. 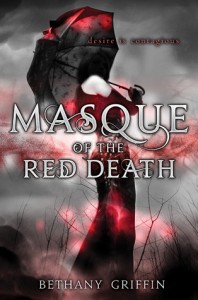 Masque of the Red Death takes place in a neo-Victorian, steampunk city reminiscent of New Orleans. It’s a decaying metropolis, practically in ruins, in no small part due to a highly contagious plague that’s afflicted the populace. Our protagonist, Araby Worth, is the daughter of a scientist. Her father invented the masks that allow people to travel out in the open without fear of contracting the disease. This allows her a position of privilege.

You see, only the wealthy can afford the masks. The poor are left to fend for themselves. Of course, the rich take all this doom and gloom seriously. With death and disease all around, most of them spend their time at the Debauchery Club where they can forget their pain through drugs and meaningless sex.

Araby’s reasons for going to the Debauchery Club, however, are more personal. She once had a twin brother and we’re led to believe he died from the plague. Araby feels both responsibility for his death and guilt because she survived. She intends to live the rest of her life in stasis, forgoing everything and anything that her brother will never experience. (Yeah, it’s a little overkill but teenagers can be pretty dramatic.) But Araby’s existence is shaken up when she meets Elliott, her best friend’s older brother. Elliott wants to start a revolution and he needs Araby’s help to make it happen.

If there’s one thing I like about this book, it’s the atmosphere. It’s dreary, which suits the premise. An extremely contagious, and extremely lethal, disease is sweeping through your city. There is no cure, and only a select few have access to the one thing that has a chance of preventing infection. I’d be hopeless too.

Unfortunately, I couldn’t appreciate this as much as I’d like because I spent a good chunk of the book utterly confused as to when and where it takes place. I admit it’s the fantasy reader in me. I like the setting clearly defined and portrayed. I never could figure out if Masque took place in an alternate historical earth featuring steampunk technology or if it was a constructed, secondary fantasy world. There are aspects of the setting that can even support a post-apocalyptic setting. It’s almost as if the setting attempted to be everything for every reader, and that never ends well. Readers who aren’t as fixated on setting probably won’t mind the vagueness but those who do pay attention to that sort of thing may run into some issues.

Araby is a frustrating protagonist. The angst stemming from her survivor’s guilt makes sense for the majority of the book but when the big revelation comes towards the end, I couldn’t help but think the degree to which she self-flagellated was blown out of proportion. In many ways it makes sense for her to go through life, merely existing and trying to escape, but while that’s a realistic course of action, it often ends up being dull to read about.

When Araby gets pushed out of her comfort zone, I should have cheered. Instead I ended up boggling over some of her decisions. For example, why in the world would you steal things from your parents because a guy you just met (and who you don’t even like) told you to? There’s no logic here, and it makes Araby look a bit dim. She also goes along with many things that would normally set off warning bells. There’s being naïve and sheltered, and then there’s having no sense of self-preservation. It’d be nice to think these actions are due to Araby’s survivor’s guilt, which in turn has fed a sort of fatalistic attitude but I’m not convinced that was intentional.

There’s also a love triangle. I’m sure no one is surprised by this, given the state of the genre these days. Araby is initially taken by Will, a bouncer at the club she frequents with her best friend. Will seems like a nice guy — he’s kind to Araby, despite the obvious difference in social class; he takes care of his two younger siblings. I truly liked the portrayal of the relationship between them. But when Elliott was introduced and began to take up more page time with Araby, I knew Will’s viability as a love interest was going to plummet.

This irritated me because Elliott is a jerk. He’s not nice. He tells Araby not to trust him but he also expects her to do all these things he asks. He’s jealous and possessive for no good reason. There’s a memorable scene in which he threatens to drop her into a river filled with hungry crocodiles. None of these things scream love interest to me. They do, however, scream Get away. I will never understand the allure of the jerk love interest. Maybe I’m supposed to excuse Elliott because of his tragic family history but that’s not going to happen. Araby’s family history is just as tragic and she doesn’t treat people the way he does.

But my biggest complaint about the book has to do with its execution. While I really did like the dark, gloomy feel of it, many aspects did not ring true. Like many other people, Araby goes to the Debauchery Club to forget her sorrows. For some people, this means having meaningless sex with strangers. For others, like Araby, this means getting high. Pretty edgy material, right?

Except it doesn’t read edgy. Nothing about how the club is portrayed is believable or authentic. Araby is constantly getting high but her drug trips never actually read like drug trips. She was always passing out or falling asleep. That’s not getting high. That’s being sedated or getting roofied, neither of which I think is the intention. Looking back, I realize I had a similar complaint with your previous novel. I really dislike the inclusion of “shocking” content to be edgy without actually going all in and being edgy. If things like drugs and meaningless hook-ups are going to be portrayed in novels, then it needs to be more than just for show.

I had high hopes for Masque of the Red Death. Maybe too high. It had a lot of elements I like: gothic atmosphere, plague, and references to Edgar Allan Poe. But the execution left a lot to be desired. Combined with frustrating characters and a love triangle lacking any subtlety, I regretted being lured in by the pretty cover. D