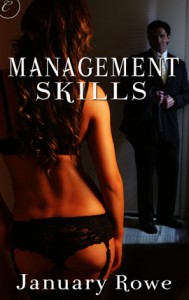 Grant Edmonds owns a company that designs “mechanics and media for…live spectacles” like big concerts and smaller club scenes. One job he does is for a friend who owns an exclusive fetish club. On opening night, Grant sees a mesmerizing performance from Silver. His friend, however, refuses to release her real name. However, he nearly immediately recognizes his new employee, Allie Fairfax, as the elusive dancer.

One of my major problems with this book is that conflict was raised and then easily tossed aside for a new one. For instance, there’s inherent tension in an employer/employee relationships that is exacerbated by Allie’s past. But any office tension is discarded when Allie and Grant have sex in her office without much thought to any consequence other than Grant telling Allie he will leave her office if she asks.

Allie has some issues that surround her performance at the fetish club. She keeps reinforcing to Grant that even though she was a dancer, she wasn’t a slut. She dresses conservatively to the point that her friend, Pilar, points out that a 70 year old woman has the same suit on the Allie is wearing. This drives Allie to get a belly ring. Problem solved.

If there is any extended focus on any conflict it was on Grant’s desire to “own” Allie. Allie has had a relationship like this in the past but her Dom failed to really dominate, instead trying to cherish Allie.

Because I started taking classes at the college. He let things slide, indulging me, spoiling me, as if he was afraid. Maybe he figured I’d leave him once I got a degree. Never would have happened. I loved him. But I depended on his exacting nature for security. I needed his praise. I needed him to put me over his knee during those rare times I didn’t meet his standards. He didn’t do any of that anymore. Instead, he worshipped me.

The above quote paragraph kind of exemplifies this book’s problems for me. I understood the point Allie was trying to make. However, the way it is worded doesn’t really convey that message. It wasn’t so much that Allie was mad that the guy spoiled her or worshipped her, but that emotionally, the person was not fulfilling her and he had changed in the course of the relationship to the point that Allie no longer felt secure in his love.

The words you choose to use, the conflicts you chose to focus on, and the scenes you included did not flow organically. The story seemed forced and episodic as if you strung a series of scenes together from different projects instead of focusing on who Allie and Grant were and how they came together. The sex scenes are hot but because of I did not like Grant and the tone of the sex scenes, I didn’t enjoy them.

Finally, I really didn’t like Grant. He came off domineering not just dominate. His idea of a relationship was that Allie was to submit to his every demand because he, of course, knew what was best for both of them. This included putting Allie in a sexually heightened state of mind for four weeks without release. When she did disobey him, Grant felt disgust at her. Disgust!

He worked to soften his annoyance with her. He fought off his disgust at her bribe—oral sex for forgiveness. Her previous Dom had obviously overlooked her misbehavior in exchange for sucking him off.

Disgust is a pretty strong word. He actually thinks of her as a thing:

There was a soft knock at his door. He opened the door to his disobedient property. Her eyes were red from crying.

I had a very difficult time buying into this as a loving, equal relationship. There is no discussion of trust or boundaries. It was Grant’s way or you were the object of his disgust and disdain.

He enjoyed grilling her. It didn’t arouse him in a sexual way, but it still satisfied him deeply. Spanking her had been a duty, an unpleasant chore. Interrogating his property was a pleasure. The harsh light magnified every nuance of her expression. He could observe her very thought process. He was making her more self-aware.

I find this idea that the man always knows what is best for the woman, particularly in sexual situations, distasteful. Poor Allie, although she didn’t like to be spoiled and cherished so maybe being treated like an object is just right for her. D

P.S. I hate the word “gash” when used in a sex scene. There are few words less sexy.

“His tongue dipped into her gash.”