One of the great things about NetGalley is that reviewers can browse, and while I was browsing through new Romance releases, I came across your novella, "Like Clockwork," which intrigued me because of the interesting cover, the steampunk aspect, and the female inventor heroine. Although some readers dislike novellas, I think they often work for stories that are too sprawling to fit in a short story but not dense enough to fill out an entire novel. Unfortunately, "Like Clockwork" felt too packed and too ambitious for a novella, and for me the novella did not have either the precision or rhythm it needed to be successful. 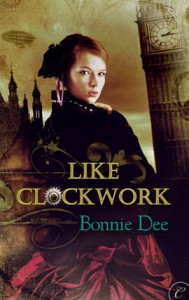 In the penultimate year of the 19th century, Victoria Waters is starting to regret the part she played in creating the automatons who have all but replaced the working class people of London. Displaced and impoverished, many of these people now live in the underground tunnels around the "tube" station, and a radical advocacy group, the Brotherhood, has emerged in grave opposition to the displacement of humans by machines. Victoria's original vision had been quite the opposite – she hoped to make workers, especially children who labored in factories, safer by allowing for the substitution of machines in the most dangerous labors. Now, though, automatons are acting as nannies, as butlers, as factory workers, and more, and Victoria is on her way to make a case for caution to the Commission for Animatronic Affairs.

In a hurry, and late as usual, Victoria absentmindedly answers the man who addresses her on the train platform, only to find herself chloroformed and carried off by a man she did not know or recognize. In a city currently terrorized by the female-murdering "Southwark Slasher," the average woman might take more note of her surroundings, but Victoria is hardly average, and neither is the man who abducts her, a member of the Brotherhood named Dash. The Brotherhood knows she is on her way to the Royal Court and is hoping that by taking her prisoner they can get the Commission to recognize their demand for equal representation on the Commission.

To Dash's surprise, Victoria quickly recovers from her initial fear and anger over the drugging and abduction and agrees to help the Brotherhood make their case to the Commission. Further, Victoria realizes that she feels toward Dash "something she'd never felt before, a sort of heat that surged through her when she tilted her face to meet his eyes." In fact, they develop such a strong accord that when their discussion is interrupted by news of another Slasher victim – this time a young prostitute who had taken Dash under her wing in years past – Victoria takes him to her house to recover his wits.

Dash, despite his terrible shock, is attracted to Victoria, as well, and by the time she sees him off, they hungrily kiss, interrupted only by the knock of Victoria's wonderfully efficient butler, Patterson, an animatronic gift from the Commission for Victoria's work. As Dash finally leaves her house – securing Victoria's promise to help the brotherhood and her desire to find out what the police know about the young Lizzie's death, both Dash and Victoria are dazed and off-kilter with the monumental events of the day and their powerful mutual attraction.

What follows is an intertwined tale of murder mystery and romance, with Victoria and Dash becoming increasingly entangled in each other's lives and in the violence that ultimately touches both of them after Victoria's scientific mentor and friend is brutally, inexplicably murdered. It is, to say the least, a great deal of action pressed into a relatively short space, since that first day the two meet comprises more than 40% of the novella.

As Dash leaves Victoria's house, he has a thought that floated through my head multiple times during the story: "[t]oo much had happened within too short a time." And what did happen was of a character requiring more than half a none-too-long novella.

For example, Victoria and Dash are not only of different classes, but Dash does not even possess a formal first or last name beyond Dash, short for "Grab "n' dash," which his friends named him after he showed a skill at stealing. Although both lack their parents, Victoria is considered an educated "lady," while Dash is a graduate of a street education, and he currently has no real trade (although he was mentored and partially educated by a now-dead bookseller for a time). And while this story takes place as Victorian values were in decline, it was still no small thing for a couple like Dash and Victoria to be unusual, something both of them recognize (with Dash making the usual nobly defensive noises about her being a lady and he being a criminal). But by the second time they meet they are making out in a park across from Victoria's house, and the nuances of this relationship – of which class differences are merely one of many different issues – are brushed over, in part because the mystery aspects of the novella are similarly pressing.

In some ways there is a great deal at issue here. There are the social issues that comprise the story's impetus – namely the question of ethics around replacing humans with machines. These are very real questions the story raises but, unfortunately, does not have the time to consider beyond superficial statements like the following:

"You, madam, gave flesh to the automatons, but did you ever once consider what would happen to the workers your creations displaced? There's little enough the uneducated lower classes can do. Menial labor, factory jobs, serving positions are now mostly filled by automatons."

Which left many of the city's poor living underground in the tunnels around the underground railway station. Which raised a number of questions for me around the plausibility of people living in an enclosed space through which the chemical waste of coal-fueled steam-powered trains flowed.

Then there were the steampunkish aspects of the story, which seemed primarily limited to the science necessary to create the automatons. Victoria, we know, helped create the skin and hair, a "poly-blend" as it is referred to in the story. Now I confess my general ignorance in the area of chemistry and synthetic and natural polymers, but I do seem to remember that beyond vulcanized rubber, it was a good fifty years until truly synthetic polymers were being manufactured for things like cloth and yarn. And since this is still a society that powers its trains with coal and steam, and its lights with gas (Victoria even lives on Gaslight Lane), I felt a huge disconnect between the advanced science of these synthetic polymers and the rest of the scientific knowledge available to people. And it made me wonder: wouldn't this kind of science rely on other areas of progress, from electricity to various advancements in chemistry and plastics?

Regarding the nature of the romance and the mystery, I just could never get past the fact that within minutes (it seemed, at least) of Victoria's abduction, she was on board with the Brotherhood's agenda, merely on Dash's impassioned comments to her regarding the automatons and her own concerns. And the speed of the romance is equally break-neck. Dash has been attracted since he carried her, unconscious, away from the train platform (which raised another issue for me – how come no one saw or stopped him? The guy was dragging/carrying an unconscious woman quite a long way, it seemed): "A hot stab of lust shot through him at the sweet vulnerability of her sleeping face. He frowned at his body's inappropriate reaction. This was about a political agenda, not him growing a stiff one because of an unconscious female in his arms."

As grateful as I was that he recognized the inappropriateness of his reaction, it was also standard romance code for "impending relationship' and served to highlight the unbelievable speed of Dash and Victoria's involvement. And the speed relies on numerous clichés and shortcuts to complete its course in such limited space. For example, we get a scene in which Victoria and Dash ride a carousel, so that Dash can reconnect to his childhood idealism and both can feel free enough to indulge in a little make-out session in the park's bushes. We get the impassioned kisses in Victoria's home and the talk of how isolated she was growing up, how little opportunity an otherwise beautiful and wealthy woman has had to find an appropriate male. We get Dash's break of confidence in his own worthiness and Victoria's stubborn faith in him (after only a few days, it seems!).

In fact, the speed never seems to let up, because while the main narrative is relatively chaste (Victoria remains a virgin throughout the body of the story), there is an epilogue that takes place a mere five months later and it felt as if the story itself has moved relatively slowly in comparison. I would have been so much happier if that epilogue – given the complex issues between Victoria and Dash, as well as the complex issues with which they were dealing in the story – had either taken place several years later or had not been included at all, because for me it undermined rather than solidified the status of their relationship.

And finally, the mystery of the Slasher, which is woven into and around the rest of the story. There was a wry irony to the solution, one that brought into focus a central tension in the story itself – namely that of seeing machines and potentially threatening versus seeing power-hungry humans as threatening in the way they could use machines. The story plays with both options, initially leading us in one direction, but abruptly changing course late in the novella, in a direction I actually found much less interesting, although infinitely more convenient for the pace and length of the story.

In the end, I had to wish that this story ticked along at a much more leisurely pace, one that would allow the science, the mystery, the political and economic issues, and the romance to develop more slowly and more thoughtfully. Unfortunately, at the rate this novella traveled, it was, for me, an unsatisfying journey. D

→ Janet
Previous article: My First Sale by Beverley Kendall
Next Post: Why Are There So Many Positive Reviews About Books?