REVIEW: Kat and the Dare-Devil Spaniard by Sharon Kendrick

I subscribe to the Harlequin Presents digital package which means I receive eight books a month delivered to my digital inbox for under $25.00. Generally I think this is a pretty good deal as I like the emotional agnst packaged in small consumable portions. I can read these books in under two hours and some days that is all the time I have to read. But there are a lot of tropes in the HP line that bother me and one is the unrepentant asshole dressed up as the macho male. Frankly I see these men as nothing more than bullies and unless they give a really good grovel and show some realization of their assholishness, the romance isn’t very satisfying. 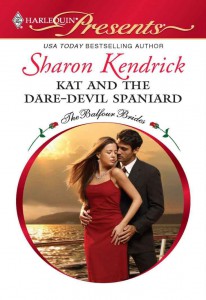 Kat Balfour is one of the Balfour daughters. Her father has indulged her most of her life and she’s lived a pretty charmed existence shopping, partying, and generally enjoying herself. Recently, however, her father’s infidelities have resulted in some embarrassing publicity and thus, her father decides that all of his daughters need to be taught a lesson. He arranges to have Kat go on yacht trip with Carlos Guerrero, a former bullfighter, because, as her father states “He is the only man I have ever seen stand up to you, and you cannot run away while you are at sea!”

So because her father is an asshole who can’t keep his dick in his pants and the Balfour name is a byword for scandal on the lips of everyone in Europe, Kat is tricked into going on boat trip with a man who “stood up to her.” Kat isn’t on a pleasure cruise like her father intimated. Instead she is expected to cook and clean for Carlos and his entire crew for the entirety of the trip. I don’t think I could even cook for 8 men, including an incredibly wealthy one who probably has very strict ideas about what good food entails. It’s a ridiculous challenge and totally unfair.

How did Carlos stand up to Kat? Well, Kat saw him at a ball and went up to him and ASKED HIM TO DANCE! This was outrageous to Carlos. Because of the INVITATION TO DANCE, Carlos assumes that Kat is a slut. BECAUSE SLUTS ONLY ASK OTHER MEN TO DANCE. Seriously. Her coming on to him was to ask him to dance. I can’t get over that.

“You are dressed like a hooker and you are behaving like a hooker!” he had hissed. “So why don't you go and cover yourself up, and then take the time to learn a few lessons on the correct way to conduct yourself in public.”

She dressed up in a tight, slinky dress and stared at him across the room because he was gorgeous and she liked him. Then, after summoning the courage to talk to him, he insults her. Good old dad is standing by and overhears this and when he wants to teach Kat a lesson about not running away, he sends Kat to Carlos under the cover of subterfuge. I’d run away from a dad like that too.

Carlos spends most of the trip insulting Kat at every turn.

Frustrated desire found an outlet in heated accusation as he willed the frantic thudding of his heart to lessen and the fierce aching at his groin to stop throbbing and tormenting him. “Do you always act like this-‘like a sex-starved tramp?” he demanded unevenly. “Are you one of these women who are ruled by the hunger of their bodies, perhaps-‘who grab at the nearest man whenever he happens to be available?”

“So, you'd better get it into that little air-brain head of yours that I am used to perfection from my staff and you have fallen way short of that. And what about the crew's lunch?”

Well, gee, she hasn’t ever cooked before. What do you expect?

“Salad dressing which tastes of washing-up liquid is an interesting innovation, querida, but perhaps it's easy to see why it hasn't yet come to dominate the market,” came Carlos's sarcastic assessment, and Kat felt like hurling a dish at his arrogant face as the rest of the crew burst into relieved laughter and pushed their barely touched plates away

And why is Carlos an ass to her? Because she turns him ON. On purpose, the flagrant hussy:

He had appeared at her family ball with a woman on his arm, but Kat Balfour hadn't cared about that, had she? No. She hadn't cared about a thing except homing in on him like a sex-seeking missile. Why, even when she was half drowned she was somehow managing to send out the instinctive message of the siren.

And just for a moment back then, he had responded, hadn't he? Responded big time.

When Kat was fighting off hypothermia, she indeed was also thinking about the best way to seduce this man who is constantly mean to her. That’s the nature of sirens. And beings with vaginas. Always trying to seduce the man. After all “All women want me to make love to them. Didn't you demonstrate that yourself only moments ago?” says Carlos.

P.S. I gave this book a D because the sentence construction and writing itself was competent. It was the execution that failed.