REVIEW: In the Air Tonight by Stephanie Tyler

I choose this book because I like romantic suspense stories  with former special forces heroes (and heroines), I liked Hard to Hold, the first in your previous series, and this story featured a sister and BFF of an older brother romance.  The blurb alerted me to the fact that there was a supernatural element in the story and while that’s not a favorite trope of mine, I decided to wait and see.  Of all the things that bothered me about the book, the supernatural element was not one of them. 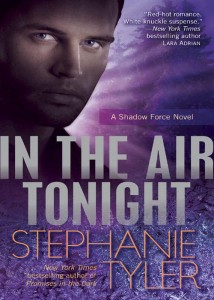 Mace Stevens is a Delta Force operative who also runs a bar in upstate New York when he isn’t off saving the world.  (I found this to be implausible, but what do I know).  Mace’s crew was captured and tortured and one of its members, Gray, was killed.  His body is shipped back to his family where he is mourned by his father and stepsister, Paige Grayson.

Paige has a special ability that allows her to see a person’s thoughts, memories and emotions by touching them with her hands.  So of course, she goes into nursing because if one is haunted by one’s ability, you choose something that puts you in near constant contact with people who are in pain and suffering, correct?  But an incident at the hospital brings Paige unwanted publicity and the local newsrooms dig out her story of being the sister of a boy who shot up his high school and killed several classmates.  Paige has suffered from this ever since because she knew her brother, Jeffrey, was bad. She could sense it every time she touched him.  Jeffrey was in the psychiatric ward of a maximum state prison, but he’s still haunting her.

Paige decides to quit her job and seek out Mace to find out what really happened to her brother.  There are two competing stories going on in this book.  The first is a continuation of a previous storyline involving Mace Stevens’ Delta Force team that was captured and tortured.  One of the members is dead and another has amnesia.  Caleb can’t remember what happened to him and the implication is that he may have killed Gray.  Throughout the story, Caleb is interchanged with Cael.  I thought that this was an editing error because it just made no sense at all.  I was told later that it was a nickname.  Not once in the book, however, was it mentioned that Cael was a nickname for Caleb and why wouldn’t it be Cale v. Cael.  This was actually a big deal to me because I constantly was wondering if there was another person in the room.

But Mace’s were just beginning. He’d had the feeling in his gut all day, couldn’t shake it, had snapped at Caleb for no reason and now Keagen, the other bartender, was also giving him a wide berth.

Cael, not so much. He was used to Mace’s moods—even with Caleb’s memory loss, he seemed to understand instinctively that his friend was, and always had been, a moody bastard.

He didn’t wait for a response before he left, which was good, since Mace had frozen at Cael’s words, was still staring where the man had been standing, although Caleb was already long gone.

Caleb had been drugged simply by luck of the genetic draw. Reid had been down for the count and the three of them that were left—himself, Gray and Cael—were equally capable, but Caleb was broader, definitely the biggest of the men, and DMH had figured they needed brawn.

There just didn’t seem any rhyme or reason as to when they called him Cael or Caleb.  I think the constant switching between Caleb and Cale confused me because some of the writing was rough and I would spend a long time puzzling over the meaning of a sentence rather than being engrossed in the story.

Mace needed to keep busy—goddamned, mindnumbingly busy—contemplated going for a ride on the ATV, until the liquor truck came skidding up the road, toward the bar.

“You’re not okay, Mace, so don’t try to pretend with me,” she said simply.  Not unkindly, and it was all he could do not to tie her to his bed and not keep there until neither of them could see or walk.

When he pulled her hips out and spread her legs, she gripped the sides of the sink, harder than before.  When he sank his tongue deep inside of her, she felt as if she could rip it off the wall.

The second part of the story is the suspense plot in which random bad things are happening to Paige that can be traced back to her brother, Jeffrey.  Jeffrey is just a stock crazy, icky villain.  There is nothing in his past that made him bad and there is no exploration of the childhood that Paige and Jeffrey shared to see why one kid turned out wonderful (and gifted) and the other didn’t.  Given that Paige had a supernatural gift, it seemed odd that this was not explored.

The emotional arc of the characters seemed to go from A to Z with no discernable path in the middle.  For much of the first part of the book, Mace and Paige are at odds and then suddenly, they give in to their passion and start copulating.  I guess I was supposed to find that the lust was too great for them to overcome but why at the particular time? Why not when she first comes to find Mace?  When does Mace go from the solitary independent man to not being able to breath without being physically attached to Paige and vice versa?

Paige’s gift is inconsistent, although no reason is given for this. The inconsistency is convenient, sometimes she can see whole swaths of a person’s past, but when it comes to Caleb/Cael, she only gets feelings but later she’s able to watch nearly every memory of Mace’s, practically experiencing his entire life through her hands.

Finally, I was frustrated when all  these random guys began showing up. I kept wondering a) why are they here and b) more importantly, where the heck are they all going to sleep?  How do they all fit into that tiny house? I felt like it was such an obvious ploy to say “see, look how many sexy guys I will write about in the future” but I wasn’t intrigued but irritated.  It’s possible that part of my problem had to do with jumping into a series at midpoint but you can’t blame everything on that.  D