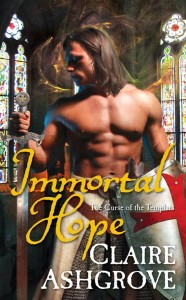 My main problem is the heroine and the flawed worldbuilding and that the conflict, which was based upon her forgetting something very important, made her look like the dumbest heroine in a long time.

The series involves a fight between immortal Knights Templar and fallen angels.  The Knights can only kill so many demons before succumbing to the dark side.  God has created seraphs and if the Knights Templar can find their seraph they will be saved by her goodness.  The story starts out by describing nine cursed Templars, but there seem to be several hundred spread all across the world or at least the white, Christian part of the world like Europe.

The heroine, Anne MacPherson, is a PH.D candidate writing her thesis on Templars.  Let’s just stop for a moment and consider this.  A Ph.D. candidate. Writing a THESIS.  It’s a dissertation in any university in the U.S. except maybe those pay for degrees that you can achieve online.  But then the book goes on and compounds this error with another, even more amazingly incorrect assertion:

But with most of the documentation about the Order’s demise lost to time, her driving theory hinged on discovering what the Order had found—something no one in history had ever been able to discover. As such, her paper was at a dead standstill, unless she could find the evidence through the metaphysical.

If she didn’t manage to prove the statement by Christmas break, Dr. Phillip Knowles would retire, and she could kiss the position as head of the History Department good-bye. As Dr. Knowles’ protégée, and the foremost expert on medieval France despite her relative youth, it had been conditionally promised to her.

A non PhD, non published, non tenured, not even a professor is promised to be the HEAD of a history department?  Heads have exploded.  The entire conflict of Anne’s is built on this flimsy and inaccurate premise.  In sum, she cannot do whatever it is that is asked of her because she wants to be the head of her history department in which she is some kind of teaching assistant. I feel like a fool even typing this description out because it is ridiculous. And to become the head of her history department she needs to prove the objects found by the Templars.  How does she plan to do this? Well, she gets kidnapped by Templars and when she realizes that the actual artifact might be in the compound, she resolves to seduce the location out of one of the Templars and thereby prove her theory.  How this proves her theory, I know not. Let’s assume, for the sake of argument, that Anne does find the artifact. How does she intend to prove its existence in a paper?  What are her sources?  Shall we read in the footnotes of her thesis that she found an artifact held by immortal Templars in some compound in Kansas?  Because that’s believable, right?  Is she going to steal the artifact? What kind of provenance would it have? How would she pass this off?

Why do I care? Because, as I said previously, this need to prove her thesis position is the crux of her emotional conflict.

So Anne gets kidnapped and taken away to some compound in Kansas that houses the North American Templars. Or something. It’s not really clear because even though we started out with nine, we now meet hundreds of poor warrior Templars looking for a seraph.  Anne is found to be a seraph and warrior Merrick is assigned to find her mate.  The warrior and the seraph is known as a pair by their matching markings. It’s like the tattoo version of memory games only it is played with body markings instead of faces or objects on a flip card.   Anne sees immediately that Merrick is her match but refuses to tell him.  Instead, she allows him to take her around to meet the other men, all of whom hope that she is their match.  I found this to be incredibly cruel. It would be one thing if Anne thought these were all crazy men and she was just humoring them.  But she had studied the Templars. She bought into their magic and immortality almost immediately.  She actually uses the matching game to incite jealousy in Merrick because he is not quick enough to her bed:

Pretending interest in these strangers lost its appeal after she’d witnessed the hope in the second man’s eyes dim, then flicker into nothingness. Though maintaining the charade came easily enough, now on the tenth potential knight, she felt more like a betrayer than any preordained savior. Her heart broke a little more with every grim expression, every brusque nod.

But as she snuck a glance at Merrick from the corner of her eye, the agitated way his jaw worked when she took a few moments to delay her verdict, said her efforts were working as she’d hoped. He’d paced all the way through her initial conversation with this man, only stopping to lean against the table’s edge when this knight presented his hand. Every once in a while, when she caught him looking, his eyes sparked with the same unmistakable fire of a man who couldn’t chain his jealousy.

This is disturbing.  Even though she recognizes she is giving the men false hope, her need to incite jealousy trumps.  And then she engages in some nice little slut shaming. To set the table for this quote, Anne is trying seduce all the secrets out of Merrick in order to prove her paper:

A blush crept into her cheeks, Ranulf’s insinuation about her intimacy with Merrick too fresh to dismiss. Even if she was doing something unethical—not to mention dangerous to her heart—by seducing Merrick, she wasn’t a whore, and the fact even one man might think of her that way, left her mortified.

…How her sister managed to go through life without feeling this kind of humiliation, she’d never understand. Always a flirt, always accustomed to men’s attention, Sophie flaunted her affairs without regard. Somehow, she never suffered for it either. In some weird way, it seemed to boost her reputation with the elite.

Who cares that Sophie didn’t hide that she slept with men. Heaven forfend! At least she isn’t parading herself in front of a bunch of lonely desperate men pretending that she might save them in order to make another man jealous.

Twas 1119, and I was but a young knight desperate to prove himself worthy. I grew up in the shadow of the first victory in Jerusalem and longed for the respect the returning knights received. The cause presented, and I rode to it with Hugues. ’Twas a noble endeavor, a fight worth spilling blood. Protect the pilgrims on the road to the holy places we claimed from the heathens, defend what rightfully belonged to Christians.”

I could excuse this thinking if it was indeed 1119 but it was the 21st Century in this book and one would think that the Templar would recognize that all the good people aren’t just Christians.

My dislike for Anne grew steadily.  Merrick believes that Anne is someone else’s seraph and is beset with guilt over the face that he is attracted to her.  Worse, he actually has sex with her, betraying one of his brothers.  Rightfully Merrick is beset with guilt. He feels terrible and he expresses this to Anne. She just laughs

“What amuses you so? You do not mind that the entire Order will know I have taken you to my bed?”

Still chuckling, Anne shook her head. “Did you forget I’ve studied your Order all my life? I know the Code. I’ve seen the surcoats in the hall. I just wanted to watch you squirm a bit.”

Worse (and I know, how can it get worse, right) and I don’t think this is a spoiler because it occurs early on in the book, but I’ll put it behind a spoiler tag:

[spoiler]Anne’s mark is on her ankle.  Merrick tells his superior that he knows that he is not Anne’s match because he’s seen every part of her body.  Except for the fact she wears SOCKS in every sexual encounter, but Merrick somehow believes that her sock wearing is incidental and that her mark couldn’t possibly be hidden from him.  [/spoiler]

I weep for the stupidity of Merrick yet he is probably a perfect match for Anne because the ending results in something so incredible stupid that if I wrote reviews with gifs, it would be appropriate to insert one with Homer Simpson saying “Doh!”

[spoiler] Anne refuses to show Merrick her mark later in the book because she has seen a vision in the future of him dying.  Her mentor reminds her that the future was always changing based upon actions that happen now.  Anne is surprised and replies that she forgot! She forgot. Dude, the entire world building depends on her forgetting that she, as a foreseer, can change the future by changing events happening now. How is that forgotten? [/spoiler]

Yet, I’m totally on board for book 2 and hoping that the portrayal of the characters will win me over in the next book.  What can I say? I am a total sucker for the wounded warrior trope and given that I really did like Stripped, I am hoping that this book is simply an aberration.

→ Jane
Previous article: In Praise of the Personal Review
Next Post: REVIEW: Skirmish by Michelle West