REVIEW: How to Marry a Duke by Vicky Dreiling

I was curious about your book as it sounded like a fun historical romp. I like fun historical romps. I like books that don’t take themselves too seriously. This is not one of those books. This book featured unlikeable characters, a gimmicky setup, but was one of the best representations of the fantasy historical regency setting that seems to be a favorite within the genre. 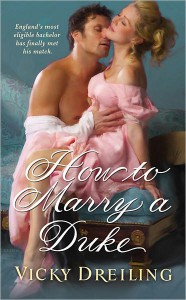 The date is 1816 and our intrepid spinster heroine (Tessa) is attending a ball basking in the glow of the happiness exuded by her most recent and successful matchmaking attempt. At the same ball is our beleaguered hero who is attending the ball with the dual purpose of finding a bride and avoiding the debutantes. A conundrum, for sure.

Said beleaguered hero (Tristan, Duke of Shelbourne) seizes upon a genius idea. He approaches Tessa and presents a proposal to her. She can make him a match and he will give her a week to do it. The two have a private (the first of many) exchange in which Tristan gives Tessa a list of qualities he is looking for in a woman. He also adds this provision:

“There is one important quality I neglected to include”   He paused a moment as if assessing her.   “I should be able to detect a hint of…passion in the lady’s nature.”

He looked amused.   “Have I shocked you.”   (note, they were, just two pages earlier discussing his liasons with widows and adultery)

She tapped his paper.   “You said you want a respectable bride.”

“I do, but I plan to remain faithful and want a wife who will abandon her inhibitions,” he said.

She huffed.   “No, you want the impossible–a virtuous courtesan.”

“I want an angel in the ballroom and a temptress in…. private”

Tristan wants his bride to be smart and enjoyable and virtuous. Also a “temptress” in bed.   Oh and their deal is to be kept confidential. Chapter two ends with this:

“I want to keep our dealings quiet.   I’m weary of all the notoriety,” he said.

“The papers have made a jest of my honorable intentions.”

“I understand,” she said. “but I can’t promise secrecy when everyone is watching you.”

He let out a gusty sigh.   “No matter what I do I cannot avoid drawing attention.”

“I can make one promise to you,” she said, meeting his gaze.   “I will never reveal our conversations to another soul.”

Chapter three starts with Tristan arriving at Tessa’s home on her invitation where upon he finds 24 eligible brides and their mothers ensconced in Tessa’s home (her receiving room must be enormous to hold nearly fifty women). Tessa then declares to everyone that the Duke has retained her to find him a bride. Um, what happened to the “I will never reveal our conversations to another soul?”

I don’t find deceit or manipulation cute. I find it irritating at best, a fatal character flaw at worse but this was just glossed over as if she is doing this in his best interest. So instead of keeping his confidence and meeting her obligation, she forces him to court twenty four women over the course of several weeks. Nice and humiliating for him, not to mention the 24 women.

The first “test”?   The chits write an essay on why she wants to be the duke. Apparently the essay test was to for him to observe how they react in demanding situations and only one of them finished the essay so he says she passed. Tristan, however, is upset that the essays are so banal. Why is he even grading them if the content of the essay wasn’t the point of the essay test? Wouldn’t he just say:   “I’ve no need to read the essays. Only one of the chits passed.”

The text of the story doesn’t match with what is shown. And in that vein, let’s talk about Tessa as a matchmaker. She is the worst matchmaker of all time. It’s not like she is presented as a matchmaker by accident, and that her ineptness laughably leads to awesome results. No, she is proud of being a matchmaker. Her first thought when approached by Tristan is that this match could make her name. She thinks she is good at this but when news spreads to of her bachelorette scheme, Tessa belatedly recognizes that the duchess, Tristan’s mother, is humiliated because it is the mother’s role to find the wife. When the girls who are eliminated begin to spread malicious gossip, Tessa’s response again is of surprise. When one of the girls accepts a proposal from another man for whom she had a well known tender and the duke is humiliated, Tessa is surprised. She was sure that the girl wouldn’t accept another proposal. When the majority of the girls are vapid, cruel and uninteresting, isn’t she to blame as the matchmaker?

“If she had known these two were so horrid, she would never have invited them to participate in the courtship.   As she knocked on the next door, Tessa resolved to warn the Duke about them.”

Women are eliminated for not following the matchmaker’s directions.  This would be fine if she was running a school but she is trying to find the BEST PERSON TO MARRY THE DUKE, not the one who follows her instructions the best.

Maybe the point was that Tessa was deliberately sabotaging the list so she could catch the Duke for herself but she picked this slate just after meeting the Duke and there was no intimation that she had feelings of lust or anything for him. She wanted to make her name as a matchmaker.

Shouldn’t a matchmaker in society have an understanding of who she is dealing with? Shouldn’t she be astute about the inner workings of the ton, how gossip can spread, how it can be stifled? Shouldn’t her understanding of societal machinations be superior? Shouldn’t she be actively looking for people who actually MATCH? Instead of 24 random girls from society who look, superficially, to be a good spouse for the duke. I mean Tessa is like a pattern card for exactly how NOT to be a matchmaker. Tessa evinces so little insight into anyone and anything that there is no way I buy her as a successful matchmaker.
Further, wouldn’t her reputation have to be spotless? In fact, the characters drone on and on about reputations yet the two of them meet privately in her home frequently. Her response to his inquiries about the wiseness of their private meetings:

“I pay them twice the standard wages and hire more than strictly necessary, so they are not overburdened.”   She smiled.   “I treat them with respect, and in return they are devoted to me.   So you need not worry on my account.”

This is a shining example of the romancelandia fantasy historical.   It wants us to use the setting to provide conflict and color but it doesn’t abide by any of the constrictions of that time period unless it is convenient for the story.
There is some passing credence given to the mores of the times such as multiple references as how they should be careful with her reputation or how a matchmaking “career” is notorious and not really for a woman of her birth and station but of course, none of those mores are observed. Tessa’s butler dresses down Tristan and he takes it with good humor. Tessa is able to pass in and out of society without qualms and without censorship.   The private assignations continue. Her “career” (the word used repeatedly in the book) is discussed as if it should be an issue of pride instead of embarrassment. The debutantes and Tristan engage in frank discourse during one scene in which the girls get to question the duke and the first asks how many girls he has kissed. After one exchange, one of the gently bred ladies pumps her fist in the air in exultation.   Really?   At some point, I expected someone to burst out with “Who let the dogs out? Woop, Woop.”

We are supposed to think well of the heroine because she befriends spinsters. That’s her sole redeeming feature. She likes spinsters and wall flowers.

She’s distressed that he admits to knowing her better than any of the candidates. How can this be a surprise. She’s spent hours alone with him.   They talk.   He and the candidates play stupid games that she took a part in inventing.

Nothing really gelled for me in this book. I recall one page in which the heroine trots out a French phrase. Other than touche, I don’t remember there being even one other French phrase. What was the point of that?

“My mother confronted me about the barge after you left the drawing room,” he said, his voice rumbling.   “You took all the blame.”

“I made a promise to you, and I will not break it.” (What PROMISE?)

“You are loyal,” he whispered.

I didn’t believe, or like, any of the characters in this story. I felt like it presented a historically unrealistic setting peopled with a heroine who couldn’t match two cards together let alone two people and a hero that was duller than dishwater. D