REVIEW: Hour of the Lion by Cherise Sinclair 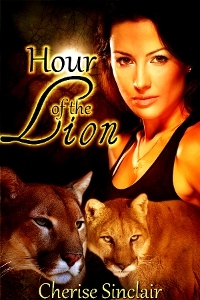 Part of the problem had to do with how much this book meandered from idea to idea with no clear outcome. The pacing of the book was slow, slow, and more slow. It’s hard for me to even give a plot summary of the story because it was just everywhere, with dangling plots galore.

The heroine, Victoria Morgan, was a 20* year covert operative who was being told by her boss that he no longer had use for a disabled veteran. At this point, after the first paragraph, I am thinking, hell yeah. A woman who is a special operative. This is something awesome and different. Vic has been captured, though, and is being held with an old woman and a young male teen. The young teen is a shapeshifter and he extracts a promise from Vic that she will search out his grandfather if they ever escape.

Vic is a study in incomplete contrasts. For instance, she defines herself as a soldier immediately responding to commanding voices. (This, I suppose, is a signal of her future sexual submissive status). But she was a special operative, working by herself mainly (which, again, seems odd but the only contact she has in the book with other military people is Wells, the spymaster). If truly was an independent operative, she would have been taught to think on her own and not respond to just any commands else she would be nothing but a automaton. And the special ops/covert ops/spy thing is all meshed together as if they are one position. I tell myself that I am not going to be super nitpicky. I am going to enjoy this book, dammit. Forward, I command.

The sad thing is that this book was just a mishmash of ideas, poorly fleshed out ideas. Vic is no more convincing as a special/covert/spy operative than Vin Diesel pretending to be a woman. Her “I bark on command” sensibility is just one of many traits that simply don’t fit the parameters of the character that was attempting to be portrayed. She initially bemoans the loss of her career as a spy but this is soon dropped so that we can focus on her “investigation” which leads her to the Northern Cascades and into the arms of Alex and Calum, the Cosantir of the shapeshifters.

The shifter myth in this story has a convenient twist. You can choose to be a shifter or not. You see, there is a special glowing door in a shifters brain. You can choose to open it or you can deny it. You go feral if no one loves you. Also, in special perfect shifter land, there is no rape because, well, let the book explain it:

Heather patted Vic’s hand. “No rape, girlfriend. Never. If a guy can’t smell that a woman is hot for him, his equipment doesn’t work.

In amongst Vic’s search for the young boy’s family, the investigation into whether shapeshifters exist, her supposed emotional trauma from no longer being a spy/covert/special op, the loss of Wells’ support, the potential “killers” out for shapeshifting blood, her introduction to magical beings, she falls for not one but two guys. Who are brothers or littermates, if you prefer. And littermates always want to bond with the same chick. Fortunately for women, these litters are primarily made of only 2-3 males.

As for the sex scenes, I could barely read beyond the first paragraph. They were boring, ordinary, with little emotion. There is no character growth as far as I could see. The world building is force fed through info dump after info dump. The sex scenes are banal. (By the third one I was regretting ever thinking a bad word about club scenes)

The ending of the book tipped this over into eye rolling territory, not because it was crazy or over the top. I only wished it had been because then I would have at least been interested. Instead, the old big misunderstanding trope is trotted out and a bunch of random emotions are spewed across the pages in a haphazard manner which had very little foreshadowing, but was done with the intent to make the reader feel agnst, I guess. At this point, though, my mind was numb. Vic was acting like a ninny and I was hoping that everyone would go out in a fiery blaze. Anything to inject some excitement into this. But no, it was melodrama featuring two emo shapeshifters and one tearful and hurt covert/spy/special ops. When I read that the lifemate bonds were commemorated by bracelets made of “special elastic”, I thought that was emblematic of the story. A mundane object attempted to be made better by the designation of the word special. D

* I think she was a 20 year veteran although I am not completely sure. As I re-read the book for review purposes, I found no other definitive reference other than the first paragraph. Later her time in the special forces was referred to as “years”.