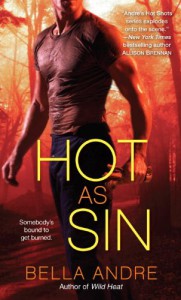 I admit that the one and only book I read by you was one about football and I had a fairly negative reaction to it given that so little of the football aspect was portrayed with accuracy.   I was   hoping that this would be different.   While Hot as Sin is readable, it suffers from the same problem as the football book.   The story is paramount and little details don’t matter so long as the story proceeds in the fashion that you want.   Accuracy, authenticity take second fiddle to the emotional arcs of the characters.

Sam and Dianna were the epitome of young love (or at least that is the set up that you want us to buy initially).     Sam was 20 and I think Dianna was 18.   Dianna, for reasons revealed later, leaves Sam at the tender age of 20 and Sam has never, ever gotten over it.   He’s so connected to her that when he is told she was in a car accident in Colorado, he immediately flies (from the Lake Tahoe area) to be by her side.   Sam is a forest firefighter, a “hotshot”.

The story that you tell about them – young, hormonal and immature was well conveyed to me. Their emotional arc was in overcoming this. I found it rather frustrating that, despite time and distance, they weren’t perceptive enough to come to the realization separately.   It was easier for them to progress forward by pretending the other was responsible for their failed relationship. Of course for either character to admit their own role in a failed teenage relationship would have lessened the tension in the story (given that I didn’t buy into the myopia, there was no tension for me either, only frustration). As an add on sort of conflict, Sam is distressed that he is a firefighter and Dianna is a big cable news star (not of a major news network but of some regional show).

The external conflict is represented in the form of Dianna’s search for her sister.   Her sister called to report she had joined a commune.   Dianna rushes to meet her sister. After a frustrating meeting, Dianna leaves, upset.   She gets into a car accident which results in fatality of another driver and lands in the hospital.   The twin brother of the dead driver finds out that Dianna has a sister and kidnaps her.   The sister is able to escape and report she is in danger but her captor cuts the message short.

For some reason, Sam decides for Dianna that if she reports this to the police they will not listen to her and the only way to save Dianna’s sister is to go after her. Even if the sister is a flake, if she calls you and reports she is in physical danger and then you can’t return her phone calls, it seems reasonable to report this and not go running into the mountains with some firefighter.

Sam, who cut his teeth on “class five rapids on the American River in California” takes Dianna on similar level white waters in a tipsy inflatable raft.   “Was he out of his fucking mind?” he asks himself at one point.   That is my question exactly.   Also, given that Sam is from the Sierra Nevadas and Dianna is from San Francisco, what the hell are the two doing hiking by themselves? Doesn’t it make sense to get someone to guide them or is one mountain range just the same as any other?   Of course, having a guide along would ruin the possibility for sexy hijinks between the two.

Dianna, however, turns out to be “instinctively better at rafting than most of the guys he went rafting with during his off months.” Dianna and Sam also engage in cliff climbing (something Dianna also has never done before) and hiking long distances (again, something Dianna is engaging in just one day after a traumatic car wreck).   The boon for the story is that because Dianna is so inept, Sam gets to save her  again and again and again.

There were editing problems:

Pulling out a credit card, he got them each a room, knowing it wasn’t exactly what they’d prefer, but deciding to take what they could get at this point.

He didn’t beat around the bush when he emerged from the lobby. “They only had one room left.”

“But he couldn’t ignore the dichotomy between her salary and his.”

Dichotomy? I think you meant discrepancy?

“She was gravity and he was falling.”

Gravity doesn’t make things fall.   Gravity is the pull between two particulate masses.    Gravity = the force on two masses.   If she is the force that pulls two masses together, then he would be one mass and …. what would be the other?   There were others, but the point is that once I spotted a couple, I began to question all the metaphors and similes.

The implausibility of the story continues to the very end where the hero rises miracuously from a fall that should have killed most mortal men and he just gets a CT scan and is released.   Like that would EVER HAPPEN IN REAL LIFE.   Also? They give him clothes from a doctor because he is just too big for the hospital gowns (he is, by the way, 6’2″ which is not so enormous that they don’t have gowns for peeps his size.)

But hadn’t he done the same thing she was doing now, immediately assumign that she had to be looking down on him and his salary?

How much of the blue-collar, white-collar dichotomy was in his own head?

Only a handful of people knew he played.   How could he have forgotten Dianna was one of them?

Damn it, was there anything they could talk about that wasn’t a minefield?”

Did he know that his touch made her heart race?   That even without touching an erogenous zone, she was getting hopelessly aroused?

Also, for a book called “Hot as Sin” there was little sex in the story.   Up until page 173, the only sex scene was a furtive teenage grope and penetration in a truck.   The sex occurred, of course, on their trail hike.   As the two were sexxorring their way  across  the Rockies, I kept thinking  where is the urgency to find your sister?   Needless to say, toward the end of the book, everything irritated me.   D