I bought this book based its placement on the Romance Kindle bestseller list, the sample and the 25 reviews, most of which were positive. It’s told in the first person but that has never deterred me before. The best part of Hooking Up is the sample which was entertaining enough for me to hit the buy button. Unfortunately, the story lost steam and became quite tedious. 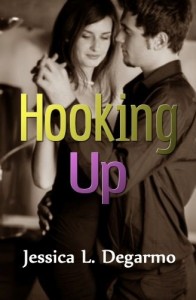 Caitlin Edison’s long time boyfriend breaks up with her and she’s devastated. Michael has been her bulwark since high school, the one steady thing in her whole life. She’s relied heavily on him, particularly since the death of her parents.

Her friends suggest that she “hook up” with a random guy to help her get over her heartbreak. Ah, the old “the best cure for one man is another man” prescription. At first Caitlin resists because she is “old-fashioned by nature” and “had never thought of having sex for the sake of having sex.” However, depressed and lonely, Caitlin soon finds herself at a local watering hole, scoping out the action. I really liked this set up in Liberating Lacey and was interested in seeing how this version would play out.

Caitlin takes a man home and then, when she is finished with him, urges him out the door. In a twist on preconceived concepts, the man resists. Ryan, the man at the bar and police officer, isn’t satisfied with a one night stand. Strangely, Ryan is then depicted as this crazy stalker like character who will just not let up. I wasn’t certain that I was supposed to find this sex or scary. I found it the latter regardless of authorial intentions.

Ryan would not take no for an answer. He finds out Caitlin’s phone number through illegal means. He dogs her every step. When she refuses to see him again, he starts ticketing her for speeding, illegal parking, and a few other violations. When Caitlin finally succumbs, Ryan fixes the tickets. “All charges were dropped (he said he was planning on dropping them anyway–he just hadn’t known how else to get my attention.”

The story had a serious telling v. showing mismatch. For instance, Caitlin professes to not want anything serious and to take things slow, yet she spends nearly every day and night with Ryan. If she had time to herself, there was little evidence of it throughout the story.

There were attempts to create an emotional arc for Caitlin that addressed the issue of abandonment, yet, by pairing Caitlin with this over the top stalker guy, the issues aren’t dealt with, only masked.

Beyond the characters’ unappealing personalities is the sheer tediousness of the story telling. It’s hard to describe exactly, but every paragraph was like TL;DR (internet speak for “Too long; didn’t read”). She is feeling sad. She cries some tears. She goes to work out. She cleans up. She stops and grabs Thai food. She returns home. She is sad. Rinse and repeat. Sometimes she goes out with her girlfriends. Then she goes out with Ryan. She spends about 100 words contemplating Ryan’s single fatherhood.

The amount of navel gazing in this story is incredible but it isn’t insightful or thoughtful navel gazing, it’s pedantic. Caitlin is boring with little depth and her internal monologues show it.

There is no motility in the story and what little life exists is brought about through the use of wooden caricatures like Caitlin’s indifferent society bitch of a grandmother or Ryan’s vindictive society ex wife (sense a pattern here). This book read far less like a romance and more like a chick lit book only without the charm, vitalilty, and humor of other chick lit books. I only paid $.99 for the story but I felt that my money would have been better spent somewhere else. D