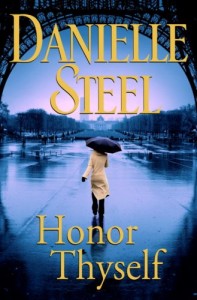 It was with avid curiosity that I read your February release, Honor Thyself, feeling quite out of the loop for not having read any of your previous work.   After finishing the book, I was less curious but a bit confused, and so I went to Amazon to see what other readers thought of the book.   For probably the first time, ever, I found myself in agreement with the vast majority of the 20-something reviews there (with the exception of Harriet Klausner and one or two others):   in short, the book was a real disappointment.

At 50, American movie star Carole Barber is finally starting to come out of the grieving fog her husband’s untimely death gathered around her, but she still can’t get past the writer’s block that threatens her first book-writing effort.   Unsettled and unfocused, Carole ventures back to Paris, a city she loves but has not visited since she broke off with her married lover 15 years ago, to see if she can find that big idea that continues to elude her.   She tells her conscientious assistant not to worry about her – that she plans to do some traveling and will not be in close touch.   So when Carole is gravely injured in a terrorist attack to a Paris tunnel, she lays unconscious in the hospital for more than a week before her ex-husband begins inquiring about her, discovering the horrible truth that Carole may not survive her injuries.

Soon, Jason the ex-husband, Anthony and Chloe the grown children, Stevie the dedicated assistant, and Matthieu the ex-lover (who finds out belatedly about Carole’s state when someone leaks the story to the press) descend upon the Paris hospital to coax Carole back to consciousness and to health.   Carole does awaken, but she comes to without her memory, recognizing no one in her life and suffering an initial inability to talk, let alone remember the right words for her thoughts.   In the process of recovering her memory, Carole and Matthieu, now a widower himself, begin to rediscover their emotional bond, and Carole has the chance to re-examine her priorities, her life as lived, and the direction she wants to take in the future.

I am not sure in what genre Honor Thyself would be classified.   It has elements of Romance and women’s fiction, and it has a decidedly happy and uncomplicated ending.   Further, while Carole struggles for a bit to recover her memory and her physical functionality, I imagine that anyone knowledgeable about brain injuries would be grinding their teeth reading the scenes detailing Carole’s injury and recovery.   Emotionally, Carole finds herself questioning things she never did before, especially the type of parent she was to her daughter, who feels she missed out on a lot while her mother spent so much time acting in different movies.   And then there is Matthieu, who initially frightens Carole with his intensity and attachment to her (before she recovers her memory), but who becomes a quick comfort to her as they begin to rediscover the strong friendship that always steadied their volatile passion.   Although Carole had been married twice, the second time much more happily, Matthieu is clearly "the one" and whatever conflict in the book revolves around whether or not Carole will be able to get past the hurt Matthieu inflicted on her in the past and adjust her newly discovered life to take the risk a relationship with Matthieu would represent.

For the most part, however, it was difficult to engage with Honor Thyself beyond the level of the narrative itself, because the narrative itself was simultaneously so strong and so weak.   It was weak in terms of its construction, which consisted almost exclusively of short, declarative sentences that rarely varied in rhythm, structure, or emphasis.   I cannot remember seeing a semi-colon or a colon anywhere, and while quotation marks occasionally broke the monotony of the comma – period combination, not nearly enough of the book allowed for direct access to the characters’ actions or interactions.   This is what I mean when I say the narrative was too strong – it literally read like one long, repetitive, monotonous voice over:

She felt very old after listening to him.   The story had taken two hours to tell.   She was tired, but she had the strong impression he had tried to be fair, to both of them.   The only one who had been lambasted in the tale was the Russian supermodel, but it sounded as though she deserved it. He had picked himself a major lemon, and he knew it.   She was a dangerous young woman.   Carole never had been, and had always tried to be loving and honest with him.   He had made that clear to her.   She had little to reproach herself for except working too hard and being away too often.

The supermodel in question was the 21 year old "tart" that Jason, Carole’s ex-husband, left her for, and she does, indeed, get "lambasted" in this novel, along with the terrorists who bomb the tunnel, all of whom serve as cardboard villains to provide some sense of danger and drama to the story.   And if it appears that the narrative reads simplistically because of Carole’s brain injury, there is this section told from the perspective of the doctors working on her after her accident:

They cleaned up her burns, her arm was set, she stopped breathing on her own, and they put her on a respirator.   It was morning before things calmed down in the trauma unit, and the neurosurgeon evaluated her again.   Their main concern was swelling to her brain, and it was difficult to assess how hard she had hit the wall or pavement in the tunnel, or how great the damage would be later on, if she survived.

As someone on Amazon noted, it should be a ventilator, nor a "respirator" that sustains Carole’s breathing.   But really, that inaccuracy is the least of this novel’s problems.   Almost a complete lack of narrative drama, excessive narrative repetition, shallowly portrayed emotional conflicts, and uninteresting prose made this an utterly boring reading experience.   The narrator seems to have so little faith in the reader’s ability to comprehend what is going on, that two pages from the end of the book, we get this bit of dialogue from Jason to Carole:
"You sure gave us a hell of a scare," he said, referring to the bombing and its aftermath.

Referring to the bombing and its aftermath?   Seriously, the only reason I can discern for that level of repetitive narrative hand-holding is to wake up the reader who has fallen asleep while reading the flat, unengaged, and unengaging prose.   Honestly, it is impossible for me to imagine that such writing created the author who can command $27.00 for a hardcover novel.

The one positive in the writing I can comment on is the level of detail provided, especially of the Ritz Hotel in Paris, Carole’s personal style (diamond studs in her ears, a sleek ponytail of hair – much like the author’s picture on the back of the book, incidentally), Matthieu’s blue eyes and dignified suits and coats, and, most importantly, the brand and blend of tea Carole drinks – Mariage FrÃ¨res Vanilla tea.   Now here’s where I have to make a confession:   I am a tea addict AND a vanilla addict.   I take my hot beverages very, very seriously, but until now, I have been mainly an English tea drinker (Whittard Original and Yorkshire Gold are standbys).   But as soon as this tea was mentioned I was on a mission to find it, and voila, I sit here writing this review with a cup of Mariage FrÃ¨res Marco Polo green tea, with two brand new tins of Vanilla and French Breakfast sitting nearby.   And the more I drink, the less disappointed I am with the book that gave me this wonderful gift of French tea.   Otherwise, I would likely have ended this review with a snarky admonition to "honor thyself:" don’t read this book.   Instead, I will merely say, "honor thyself:" try this tea.   It’s an A+.   The book, however, is a D.

→ Janet
Previous article: Does an Author Have to Live It to Write It?
Next Post: What Is Likely to Be the Most Pirated Book of 2009?