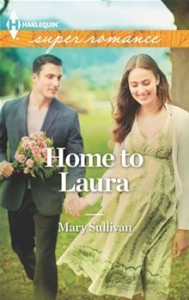 Let’s file this under “setups matter” or at least they do to me.  Nick was an absent husband and absent father, doing all he can to make more and more money. His ex father in law and owner of the business that Nick runs comes to him and tells him that Emily, his daughter needs him. Either Nick fixes his daughter or Mort will pull the funding for Nick’s dream resort.

Nick has to leave to return to his hometown because there is a dispute over the land on which he wants to develop a resort. Native Americans have claimed that there are ancient burial grounds on the land and his Catholic foreperson won’t go ahead until Nick resolves this.

Laura Cameron runs the bakery in town. She was once engaged to Nick’s brother but apparently had enough feelings for Nick that she allowed herself to be seduced and Nick arranged for Nick’s brother to find them en flagrante delicto.

Laura believes that this event has robbed her of a family.  She wants a baby and she must have a man too.

Stupid, foolish thought. She didn’t want single mother-hood. She wanted strings attached, heavenly binding for-ever strings. She wanted her life tied up with a man’s, not because she felt incomplete without one—lord, no, she was independent—but because she loved families. Babies did well in families.

Laura is so desperate for a family, she is sizing up every single male that comes into her shop.  When Nick walks in after years of absence, she is angry and hurt and then demands that they “make love” so that he will impregnate her. When Nick protests that he barely has time for one kid, let another another, she says the following:

“I barely have time for my own daughter, let alone hav-ing another child.”

“I don’t want you involved. The baby would be mine.”

“Why not? All I need is a little sperm.”

A) the two aforementioned quotes by Laura occur within the same chapter (Chapter Two) and directly contradict each other.  B) if all she needs is sperm, then do in vitro.  C) if she really wants a child so desperately, then adopt.  Stop lamenting that life is over because you didn’t get a baby out of the fiance you cheated on with his own brother!! Worse, look at who you are inviting into your bed. A guy whom arranged for you to be found screwing by your fiance.

Granted, neither of these two are prizes.  The one good thing about this book is that Nick is an asshole and Laura is a nitwit and at least they won’t be inflicting themselves on any other fictional characters.

Laura is often portrayed as selfish and not in a good way, but in a “no one’s problems but mine are really important” way.  She wants her mother to talk about Laura’ dead sister. She wants her ex-boyfriend to grieve as much as she over a miscarriage. She is distraught her mother is distracted by something and can’t comfort Laura in the manner in which she needs.

I didn’t understand anyone in the book. Not Laura, not Nick.  Nor even the young kid who wants to preserve the oral history of his Native American tribe but won’t work at the resort that Nick has set up to earn money to go to school.

The redeeming part of this book could have been May December romance between Laura’s mother, aged 58, and the handsome sculptor, aged 43. But instead of showing a courtship and falling in love, Olivia goes to sit for a sculpture and Aiden takes off her clothes and starts “loving” her immediately. It came out of nowhere. I guess Aiden’s excuse is that he sees things others do not.

“I thought I was here to model, not to be mauled.” Her voice shook, because his mauling had been so delicious.

“Is that how it felt?” he asked, staring down at her in both puzzlement and understanding. “Like I was pawing you?”

“Answer my question. Did you ask me here to model?”

“Then what was all that about?”

“You’re an attractive woman, Olivia. I’m crazy about you. I want to make love to you.”

How about expressing to Olivia that she is physically desirable instead of just attacking her under false pretenses. Gah.  I didn’t understand how I was supposed to find anything about that even remotely sexy.

Finally, there was a third romance between Nick’s older brother Ty and his pregnant but estranged girlfriend, Tammy, involving more pregnancies and more babies and more badly parented children.

Back to Nick and Laura, when they do  sex, Nick forgets the condom and this is his response:

His condom sat on the bedside table. Unopened. Unused. He’d lost control. He never lost control with a woman, had never once in his life. Before tonight. Before Laura and her tempting body. She’d made him lose control. You owe me. Was she really that driven, that selfish and underhanded? Today is the perfect day. She was ovulating. The look he turned on her could freeze hell. “You did this to get your baby.”

She made him forget to use the condom. It was her fault for being SO. DAMNED. SEXY.  Then, like this is a comedy, she is in the bathroom showering trying to “get rid of his semen.” Oh biology, if only it worked that way. What is she 14? (But, surprise, she takes the morning after pill so that’s probably the first I’ve ever read of a character doing that in a romance).

In summary, I didn’t like nor understand the characters and sometimes I wanted to reach through the screen and slap them around a few times.  D

→ Jane
Previous article: Monday News: Self publish titles made up 25% of bestselling titles in 2012; Random House begging for trouble; ebooks 26% at Hachette
Next Post: REVIEW: Captive Prince, Volumes 1 and 2, by S.U. Pacat