REVIEW: Heroes Are My Weakness by Susan Elizabeth Phillips 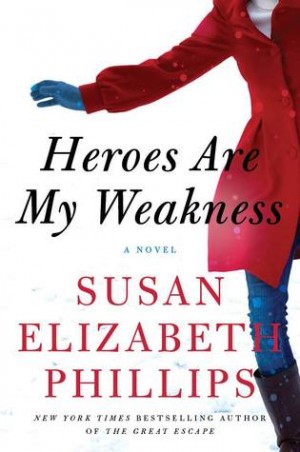 I tried, I really did, but I just couldn’t get into this book at all. It seems to have been meant as a modern take on Gothic romances, but for me it didn’t work as either a Gothic or a romance.

Annie Hewitt once dreamed of becoming an actress, but ended up becoming a ventriloquist and specializing in educational puppet shows. As the book opens, she is travelling with the puppets in tow to her late mother’s cottage on sparsely populated Peregrine Island, off the coast of Maine. Annie’s mother Mariah recently passed away and left Annie an unspecified legacy at the cottage. Mariah had been heavily involved in the New York art scene during her life and would often host artists at the cottage, so Annie suspects that there could be something very valuable involved, but she’s not sure what. By the terms of Mariah’s divorce settlement, she or her heirs must spend sixty consecutive days at the cottage each year or it will revert back to her ex-husband and his family. Annie is broke and has few job prospects, so she decides to spend a couple of months at the cottage and sort things out.

While travelling by night to the remote location, Annie runs her car off the road while trying to avoid a rider on a black horse. She hikes out to the cottage in the bitter cold only to find it dark and unheated, and collapses there for the night. The next morning, she heads up to Harp House to track down the caretaker who should have had the cottage ready for her, but instead runs into Theo Harp, her former step-brother with whom she had a brief relationship when they were young. Annie is convinced that Theo is a psychopath who tried to kill her when they were both teenagers by drawing her to a cave that gets flooded during high tide. The way his behavior as an adolescent is described suggests that she may very well be correct in her diagnosis. Theo, now a bestselling author of horror novels, has issues and wants Annie to go away. That’s the extent of his characterization for quite some time.

So we have a heroine looking for a mysterious artistic legacy, a widowed novelist hero with a difficult past, and some bad history between the two of them. If this sounds familiar, that’s probably because you used a very similar setup in Ain’t She Sweet, only this time the hero gets both the villainous teenager role and the brooding author one. Annie is no Sugar Beth Carey, though, and while it’s not badly written, the story is far less engaging.

Rather than coming across as quirky and irreverent, which was probably your intention, Annie was simply annoying. She regularly imagines conversations between her puppets (each of whom has its own personality and plenty to say) as an ongoing commentary about her life and behavior. For example:

-You mustn’t keep complaining, Crumpet, Dilly admonished her peevish counterpart. Peregrine Island is a popular summer resort.
-It’s not summer! Crumpet countered. It’s the first week of February, we just drove off a car ferry that made me seasick, and there can’t be more than fifty people left here. Fifty stupid people!
-You know Annie had no choice but to come here, Dilly said.
-Because she’s a big failure, an unpleasant male voice sneered.
-Leo had a bad habit of uttering Annie’s deepest fears, and it was inevitable that he’d intrude into her thoughts. He was her least favorite puppet, but every story needed a villain.
-Very unkind, Leo, Dilly said. Even if it is true.

The puppets are right; Annie’s decision-making really isn’t the best. She decides to come to Peregrine Island in the winter, practically unannounced, having only communicated with the caretaker by email and without waiting for his confirmation that the cottage is ready for her. She believes that Theo is dangerous, but spends her time snapping at him and occasionally trying to persuade him that his house is being haunted. That’s not cute, it’s stupid and childish.

It doesn’t help that the entire beginning, and a large part of the story afterward, is told from Annie’s point of view. As a result, there’s little insight into Theo, his thoughts and his motives, and while “dark, dangerous and brooding” may be classic Gothic material, it wasn’t enough here. There’s more from his perspective later on, but it was too late. It’s not that I can’t enjoy heroine-centric romances – Call Me Irresistible, for instance – but I need to like the heroine better, and for the hero not to be portrayed in such a disturbing way for so long.

As for the plot: someone is clearly trying to drive Annie out of the cottage for unknown reasons – island residents keep telling her that it’s not safe for her to be alone, the cottage is broken into, her grocery order is cancelled (a real problem, since deliveries are made from the mainland only once a week), someone shoots at her, and one of her puppets is left hanging from a noose. That’s actually pretty creepy. Annie first suspects Theo, but the two grow closer as it becomes clear that he wants to help rather than hurt her.

There’s a subplot involving Theo’s housekeeper Jaycie, who saved Annie from the drowning attempt, and her young daughter Livia, who won’t speak. Annie tries to draw Livia out, which involves engaging her with the puppets. I could have dealt with the puppets occasionally, but there were too many of them and their ongoing commentary was a distraction. I guess puppets aren’t my thing unless they’re vampire puppets.

Annie and Theo end up having sex, which seemed kind of out of the blue. I’ll give credit for not making it particularly good for either of them, and for having Annie understandably freak out afterward because they forgot to use protection. I managed to get through a few more chapters after that, then mostly skimmed the rest of the book to get to the ending.

The mystery of who’s tormenting Annie is ultimately resolved; not surprisingly, it also turns out that Theo is true hero material. I found some of the disclosures relating to his past disturbing:

First, Theo tells Annie that his wife had mental health issues, became obsessed that he was cheating, and eventually committed suicide. Later, it also turns out that Theo’s twin sister Regan suffered from an undiagnosed mental illness and couldn’t bear for her brother to become involved with anyone. She would make life miserable for anyone she suspected as being a potential romantic interest of Theo’s and sometimes physically harm them. Theo covered for her because he didn’t want her institutionalized and tried to stay away from anyone he was interested in. Regan was the one who tried to kill Annie, while Theo had only been trying to protect her and to keep Regan under control. Regan ended up committing suicide in her early twenties by going out to sea during a squall, soon after finding Theo with his college girlfriend. Theo believes that Regan was trying to set him free rather than to punish him.
I’ll grant that I may have missed some of the subtleties, but I was uncomfortable with the characterization of both women.

I know from past experience that your books can be very hit or miss for me, but I keep reading because the good ones are wonderful. Unfortunately, Heroes Are My Weakness joins the list of misses. D.