When we were contacted about possibly reviewing your first book “Grayton Beach Affair,” the WWII setting plus the intriguing German born/American raised hero who returns to the US on a mission caught my attention. Now this was something different and I looked forward to discovering how a romance could develop between Christian and the American woman he meets. Unfortunately, I think the book suffers from first-book-itis. 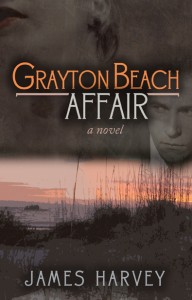 Christian Wolfe, though German born, was raised and educated in the US. After experiencing prejudice because of his foreign birth, he returns to 1936 Germany to use his engineering skills to help his homeland continue rebuilding. Though he tries to keep a low profile after the war begins, his special skills and knowledge are strong armed by the SS to free a German scientist captured and now imprisoned in a POW camp in the US.

Faced with accepting the mission or being sent to the Russian front, Christian packs a sea bag and is taken by a U-boat to the Florida panhandle. He has a week to complete the assignment then be picked back up – or face capture and prison himself as a German spy.

As he works to free Dieter Braun from the camp, Christian repeatedly comes in contact with a lovely young woman, Maggie Neal, who has fled to the area to grieve for her fiance lost at Pearl Harbor. When things go horribly wrong, Christian is trapped with Maggie for two days during which they fall in love. But he can’t escape returning to Europe where fate intervenes again and he ends up joining the French resistance. Is there hope for a reunion with the woman he loves if he manages to survive the war?

First let me say that the plot of the book is wonderful and is what kept me reading it. But I do have a big question. Braun, who must be a take off on Wernher von Braun, is captured by the Allies in France but early in the war. I’m guessing late ’41 or early ’42. When were the Allies in France this early in the war and in a position to take hundreds of prisoners? I’m just curious. I know you said you took a little liberty with placing the POW camp when and where you did but this question just kept nagging me the whole time I read the book.

The story suffers from way too much telling and not enough showing. It was okay when you were giving lengthy backstory information about Maggie and Christian since otherwise it would have taken too long to convey all that but throughout the rest of the book, it was tell, tell, tell which flattened and distanced me from the action. What dialogue there is is often awkward and stilted. For instance, after the Sheriff is shot during the escape and Maggie is driving him to the hospital, it sounds as if these two are just chatting in an office somewhere rather than speeding to a hospital with one of them bleeding and both shaken by the proceeding events.

I was also bemused at how easy it is for Christian to buy a used car and get gasoline – all without any ration coupons. But Maggie doesn’t seem to need them to buy her supplies either even though I understand that rationing was in effect by that point. Of course it took me quite a while to pin down what the exact date for the mission was and it was only when the U-boat reached France again that I knew for sure.

The relationship between Maggie and Christian did work for me. Even though they have such a short amount of time together you managed to convey how they immediately felt such a connection. Still, I was glad to see Maggie questioning herself the morning after. As she says, she could have been arrested for harboring an enemy no matter what she felt for him.

I also liked the relationship between Maggie and her friend Theresa. You portray race relations of the time with no faux PC polish which I know will disturb some but for characters born and raised in the south of the time this would have been usual. I’m puzzled about the whole John Logan subplot unless it’s a way to get Maggie out of her fog of grief. I will say the – well deserved – scene of feminine revenge which she enacts on him is one of the most bloodthirsty that I’ve ever read.

The scenes of Christian in the Resistance movement were among the most lively and well written in the book – though I was surprised at how easily he was accepted into it. But this only served as sharp contrast to the post war scenes which moved back towards the earlier telling and stilted feel. But Christian’s simple yet eloquent marriage proposal to Maggie is one of the best I’ve read in a while.

I would like to have enjoyed the book more than I did. There were parts of it that worked for me but also lots that felt like a slog. The plot is one of the more unusual WWII era ones I’ve encountered yet the telling of the tale, rather than the showing, didn’t do it justice. D