REVIEW: Gnome on the Range by Jennifer Zane

I am trying to a) read more self published books in hopes of finding overlooked gems and b) respond positively to more of the authors who take the time to write us and ask for a review.  Part of the review query process requires requesting authors to send in an excerpt, usually around 1,000 words. I read all those excerpts because the title, blurb and cover can be awful but a book is about the story, the writing, and I’ll try to overlook the three things when I have the excerpt. Most of excerpts are pretty bad, but in this case, I found the excerpt cute and entertaining, enough so that I overcame my initial inclination to decline the review request based on the title (bad), coveer (bad), and blurb (bad and confusing). 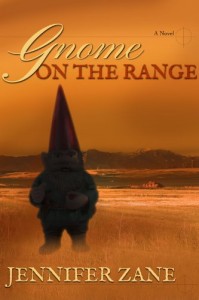 Unfortunately, the excerpt was the best part of the entire book.  First, and most importantly, this book was boring.  Despite the hijinks, the evil DOM, and the hot fireman love interest, this took six days to read.  Second, the first person narrative of the story was in the voice of a woman I found silly and foolish, the definition of TSTL.  She’s the type to run into a haunted house at night, alone, when there are rumors of a mad serial killer on the lose.   Third, this book sets up a reader for fun sexy times but the sexual tension was thin and forced. There were moments of humor but not enough to overcome the foregoing flaws.

I felt like this was the Bozeman Montana version of Stephanie Plum with the plucky heroine always getting into trouble accidentally and ending up around exploding cars with her supposed love interest being frustrated by the heroine’s propensity for danger.

Jane West is a single mother and widow.  Her dead husband was a philanderer and so while Jane has been too busy raising her two boys alone, she feels much better off.  I understand that her dead husband was a cheat, but the callousness with which his memory was treated by not only Jane but her in-laws as well was amazing particularly since dead husband was the in-laws only child.  Nonetheless, this story isn’t ever going to be known for its subtlety and emotional depth.

Jane works with her mother in law, Goldie, at Goldie’s sex store in Bozeman Montana.  Jane’s father in law and Goldie’s husband is an OB and the joke is that Goldie gets the folks in bed and Paul delivers the results.  Jane’s life takes a turn for the worst after one of her sons buys a garden gnome at a garage sale.  The garden gnome contains something of worth and a robbery turns up at her house.  Instead of allowing the police to investigate, Jane decides to investigate this disturbance on her own.   This leads Jane to be in the vincinity  of a house the blows up, in danger of being run over by a derby car at the fair, and her trailer tampered with while camping with her sons.  Even after her children’s lives are placed in danger, Jane doesn’t stop investigating.  Yes, the children are sent away but I viewed this more as a convenience for Jane to be alone with her new neighbor Ty.  The item stolen is horse semen which Jane throws away.  Given that horse semen is mostly frozen and stored in special containers, I found it hard to believe that Jane would continue to be in danger even the semen is of no use.  Yet, she is.  Because how else will Jane have even the thinnest of excuses to wander around and investigate.

New neighbor Ty is a Bozeman fireman.  He makes the moves on Jane but says he only wants to have sex without strings but then later, without having shared more than a couple conversations with Jane tells her that “he can’t do this” (whatever this is) because Jane is always in danger.

The forced chemistry and then conflict with Ty typifies the problems with this book. There is no organic movement in the relationship (or in the plot itself). In order to evoke a certain emotion from the reader, characters suddenly appear to have feelings where none existed previously.  The machinations of the author were so obvious.  The first night that Jane sees Ty across the back lawn, she is wearing  tank top with no bra. She’s a 34D with two kids but apparently her girls defy gravity (she also has a tiny waist but alas no calves. Hello, Barbie?).  When she sees Ty, two houses away (her mother’s boyfriend lives between them), she can tell he is staring at her breasts (these must be tiny backyards) so she places her arms under her chest only this pushes her boobs up so high that her nipple pops out the top of the cotton tank and Ty’s eyes bug out like a cartoon animal.  Jane is mortified and I am thinking she acts like she’s never had these boobs before, like they were a new addition to her body house and she’s getting bruises on her knees from the knee furniture arrangement.  Dude, how low cut is that tank?

The danger in which Jane was in further exemplifies the feeling of contrivance.  Every time that Jane went out to investigate something, I became more frustrated with her.  She never once was told by the police that they weren’t going to look into it. In fact, Ty informed Jane that the police were investigating, a statement that Jane met with incredulity.  Police? She doesn’t need the police! Not after almost being a victim of robbery, almost being killed three times.  The police doing what they are paid by the citizens of Bozeman, Montana to do is ridiculous!  Only Jane West, manager of a sex store, could possible get to the bottom of this mystery.

Silly and improbably plot aside, the hijinks were interspersed with dozens of explanatory paragraphs about Bozeman (I felt like I was reading a travelogue complete with GPS directions); detailed explanations of what every person wore.  There were quite a few of secondary characters that I knew only by their clothes and their hair; and meandering monologues about the pasts of characters, streets, neighborhoods, businesses, and what not. In sum, mundane and tedious detail of unimportant things.

About the only thing funny (besides the opening) were the unintended malapropisms.  My favorite was “It was like living in demilitarized zone with all the weaponry around.”  Another was “Besides, Ty pushed me out of the way and saved my life.  He deserved a kiss for that. A mulligan.  That’s what it was. A mulligan kiss.”  A mulligan? That’s a “do over” in golf.

The editing:  “Any single woman would shoot me dead for not giving in to the obvious want I saw in his gorgeous, blue eyes.  I was a piece of meat and he wanted to eat me up.  That was the look on his face, not Dex’s, That was A-Ok with me.”

What does that even mean? or the term “Um. Hunh”  Was that supposed to be “Um. Huh” or “Um. Hmmh”? I tried to replicate the sound a few times (because I was friggin’ bored out of my mind).  There were other places that commas and periods seemed to be interchangeable. “I slid my hand gently up and down. Once, Twice.”

This took time away from books I could enjoy so while it was free to me, I regret the time spent. I appreciate that you sent it but it was not to my taste.  D