This is the last of the series of books published by St. Martin’s Press in the Guardians of Ascension series. This was a crazy, cracktastic, derivative series and I must have been the only one who enjoyed them.  The series is about the fight over Second Earth.  Commander Greaves is a creature who has been creating an army of death vampires to over take the good vampires, humans, and angel like creatures.  The “good” side is defended by Endelle and her Warriors of the Blood. 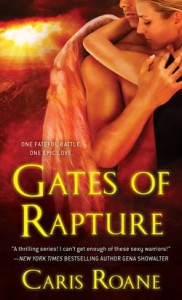 That this is the last book was mildly disappointing because I felt that there were stories left untold specifically the story if the female leader whose role in the books was slowly eroded by the male warriors.  In each successive book, she gave up more and more power to those make warriors until she was almost a figurehead despite her prodigious talents. I had hoped that a book would be devoted to her in which she would fully realize her power and those that served her would honor her.  Alas, no.

In the book prior to Gates of Rapture, the implication was that Grace had two mates, two lovers. One evil and one good. This romantic conflict is presented as resolved by both parties agreeing to an amicable separation. The resolution of some of the most difficult emotional conflicts happens between books.  The love triangle that could have presented an intense emotional drama is over at the start of the book.  Casimir, the so called evil mate, is undergoing a painful purification in another realm.  While he wants Grace to stay with him, he lets her go with no animosity on page 25 and says to her “I want you to know that you taught me about love. You loved me when you had no reason to. I will never forget that.”

Almost as quickly, therefore, as the affair had begun, it had ended, and all Casimir’s energy had turned to the pro-cess of redeeming his life. Yet even though her desire for him had ended, still she loved him. She understood his worth and hoped that in time, he would at last be the man he was meant to be.

The path is cleared, then for Grace and Leto, the spy.  Leto was addicted to dying blood, having been in the service of the megalomaniac Commander Graves who is trying to take over control of Second Earth.  Leto’s recovery is presented as a fait accompli.  He is given someone’s blood that mimics dying blood and his recovery from his deathly addiction is over. “Though the process remained a complete mystery, Havily’s blood had cured his addiction to dying blood.”  Suspense of any kind is killed right there.  No peril will ever cause unease if a mysterious process can cure everything.  Someone else achieves new abilities at just the right moment with the injection of a poison that has almost no adverse side effects other than providing greater power.

Grace also begins the book changed.  She was originally a pacifist, sweet and gentle but now she is a great avenger. It’s not that I don’t believe that observing slaughter and destruction for a hundred of years wouldn’t effectuate change, but let’s see it.  Grace’s return and her evil lover’s redemption, told to us in about three pages in the first chapter was anticlimactic and set the stage for the least interesting book in the series.

Worse was the attempt to redeem everyone including Commander Greaves who spent six books engaging in horrific acts.  I found myself impatient and frustrated throughout the story.  These are not books which can be taken seriously and the sobersides tone heightens the flaws in the worldbuilding and storytelling.  For those who are keeping track, Leto smells like Christmas herbs and fir resin and Grace smells like a meadow. This series is best when it plays up the absurd and there was little of that in this series ending book.   D