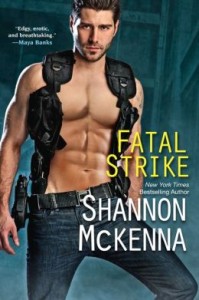 I guess I knew that Miles Davenport was going to get his own book but I wasn’t fully prepared for his transformation from skinny, nerd tech go to muscle bound alpha hero.  Unfortunately, when Miles went from a unique individual to barel indistinguishable from any other McCloud hero, it made him and by extension, his story, less interesting.  I did wonder how new readers responded to Miles who came to this story without any previous preconceptions. Alas, I am not a new reader but one who has followed the McCloud brother series since its first fabulous story “Behind Closed Doors.”

Miles has been affected by a psi-drug, a drug that enhances mental capabilities. Initially Miles’ psi enhanced powers renders him immune to the bad guy’s attacks whereas all the other muscle bound McCloud men are impotent.  Miles is able to rescue Lara Kirk who unintentionally communicates him via his mind.

Lara Kirk’s mother was a scientist who developed different mind enhancing drugs for the bad guy.  The bad guy kidnaps Lara and begins experimenting on Lara because it sexually and mentally excites him.  And because he wanted to beget children off her. She was young, beautiful and had powerful innate mental shields.

Lara has been kept for months and tortured both physically and mentally.  Despite this her recovery is remarkably fast and doesn’t take offense or isn’t frightened by Miles’ non stop erection around her.  Miles rescues her and they start getting it on what seems like seconds later (or they would have if they hadn’t been in the back of a van with others around).  Her immediate physical reaction to Miles and her capitulation just diminished the previous 100 pages of mental suffering we experienced with her in order to generate sympathy for her character.

During Lara’s captivity, she would retreat into her mind and have sex with a phantom lover – the Lord of the Citadel. I guess we are supposed to believe that her mental connection with Miles is so strong that once they are together in the flesh, her past torments would have no affect. Not the death of her parents; not the non stop torment.  I wanted to like her pragmatic approach to life post trauma but it was hard to buy into when it came immediately upon her release from imprisonment.

The psi-drug angle has been my least favorite component of these past McKenna books. The series started out with a traditional mortal villain but like Miles has undergone a transformation into this partially paranormal feel where people with enhanced mental capabilities control and kill others.  There’s a coldness to this storyline that keeps me from fully investing in the characters.

So much stuff goes on in their heads that I feel like I’m constantly being told what to do and what to feel without seeing corresponding motivations of the characters.  Even the action scenes seemed one part removed because so much of it is fighting on a metaphysical plane.  It works in movies like the Matrix but its much harder to be effective in text. Half the time I envisioned Miles sitting cross legged while he escapes into his mind and does battle with an avatar of himself against the bad guy (Greaves).

Had he not shielded himself telekinetically the instant he heard the gun, he too would be full of those shards. It had been a question of nanoseconds, or perhaps a touch of precognition. His telekinetic abilities could stop bullets, so he stood in the middle of the shattered window frame, in silent invitation.

And I found Greaves to be the standard issue megalomaniac with grandiose pretensions. “I’m going to transform the world with my ideas” (and frankly that really didn’t seem consistent with his thirst for power. Why infect others with psi-power if you wanted to be the most powerful person alive?)

It was a struggle to finish this book. I had a hard time seeing Miles and Lara as a couple. I felt their transitions lacked believability. The villain was a caricature and the action scenes were devoid of intensity.  I think I’m going to have to take a McKenna break until the psi storylines are done with. As much as I love the McClouds, I’m ready to close the book on them. D